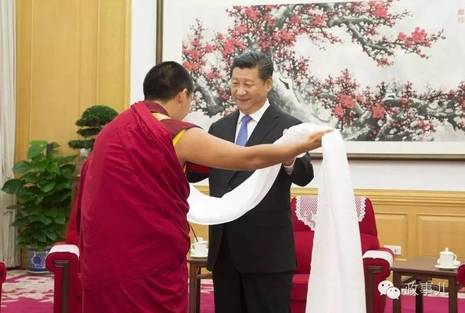 Translator’s Note: Anti-Chinese historical racism is rife in the West.  It has its roots in the development of bourgeois capitalist culture and the expansion of Eurocentric imperialism (and Christianity) across the world over the last five hundred years.  When the imperialist West encountered China, it discovered a highly civilised, ancient and advanced culture, that had developed outside of Europe, and remained unsullied (and uninfluenced) by the Christianity of the Roman Catholic Church.  The pope immediately declared China, its culture, its religions and its people to be the product of the ‘devil’, whilst Western (bourgeois) secular science deemed the physical characteristics of the Chinese phenotype to be ‘inferior’ and ‘sub-human’ in origin (in other words, the Chinese people were denied categorisation as ‘human’, and despite their obvious cultural superiority, were considered to be ‘animals’).  This attitude of blatant racial discrimination has survived more or less unchallenged into modern times, and manifests throughout Western culture in a number of diverse ways.  For instance, the UK has carried-out three pogroms in the last 1000 years.  One of these was against British Jewry (which happened in the 13th century), whilst two others were against the British Chinese Community (both during the 20th century, i.e. 1919, and 1945).  Whilst anti-Semitism has been quite rightly universally condemned, rabid anti-Chinese racism has been allowed to continue unabated.  All Chinese people are subject to this racism in the West, (as well as parts of Asia and Africa), and it makes no difference where they live, or the politics they follow.  This racism is justified in part by a US-inspired anti-China Cold War policy that utilises existing prejudice and discrimination against Chinese people, as a means to further capitalist, bourgeois political ends, in an assumed ‘fight’ against ‘Chinese Communism’.  This policy of racial discrimination against the Chinese people works so well, as it has permeated both the ‘left’ and ‘right’ of the political spectrum in the West.  Although Trotskyites ‘Socialists’ are naturally anti-Chinese (following the dictates of the racist Trotsky himself), other legitimate Socialists and Communists have allowed themselves to be led ideologically astray.  Many on the left erroneously declare that China is not ‘Socialist’ or ‘Communist’, and automatically take the side of the bourgeois, capitalist-friendly ‘Pro-Tibetan Movement’ without correctly applying the analytical method of Marxist-Leninism.  The point is this; the bourgeoisie has fabricated a ‘mythological’ China out of the imagination of the West, that has absolutely no bearing upon the concrete reality that is ‘China’.  This is pure and unchallenged racism at work.  As long as the legitimate political ‘left’ does not radically challenge this rightwing, distorted, bourgeois ideology of racial oppression aimed at the Chinese people, neither Socialism nor Communism can be successfully established in the West.  If those apparent Socialists and Communists in the West cannot ‘see through’ their own bourgeois conditioning, what good are they for the peaceful development of humanity?
ACW 5.9.2016
​
Tibetan New Year’s Eve - 2013

A letter originating from the Tibetan area of China, stated that it is proper and correct to remember the source of one's happiness and prosperity in society, and that this has been historically dependent upon the good guidance of the Communist Party of China (CPC).  This has led to many important advances and advantages within Tibet society, and has contributed to establishing the material conditions, to make the Buddhist practice of wishing happiness and blessings on all living beings, a practical reality.  On Tibetan New Year eve (2013), in Lhasa’s three major temples – the Zhaibung Monastery, Sera Monastery, and Gandan Monastery – (and other places), the monks came together to express their appreciation of the CPC, and for the rapid and important developments that have happened lately throughout Tibet, (and over the decades since liberation) that have raised the living standards and quality of life for ordinary Tibetan people.  This message of good will was delivered to the central government in Beijing, through the office of the district committee of the CPC in Tibet.  The central government immediately responded with ‘thank-you’ letters, expressing a sense of gratitude, and asking for the Buddhist monks to pray the welfare of the people, and peace throughout the country.  This letter also included a sincere request made to the CPC district committee, conveying a general attitude of respect from the Buddhist establishments (and their monks and nuns), to General Secretary Xi Jinping, expressing gratitude and thanks to the CPC.  At this time of Spring (and renewal across the land), this was considered a very pleasant New Year occurrence of great cultural importance.

This letter signifies a new openness in Tibet, whereby the Buddhist establishments fully recognise, that through CPC guidance, Tibet has developed rapidly, and that this material development has led to the ‘improvement of physical conditions that has allowed the monks and nuns of Tibet to peacefully pursue their spiritual paths of cultivating a higher consciousness’.  Better material conditions have raised living standards, relieved poverty, raised education standards, and improved public health throughout Tibet.  As things are going so well in Tibet, the Buddhist establishments have never been so close to the CPC at all levels.  In fact, the harmonious relationship between government officials and the Buddhist authorities has been likened to that existing between family members.  This has come about over the previous year, because the CPC has made a special effort to improve relationships between the government and the Buddhist temples.  Government officials, working from the premise of ‘Internationalism’, and ‘respect’ for all different peoples, have made regular visits to the temples in Tibet, and offered extensive help aimed directly at these religious communities.  Monks and nuns have been offered many incentives to gain a good and modern education, whilst pursuing their chosen Buddhist paths, and to understand that the CPC considers the Buddhist religion an important part of the country’s culture, that should cultivate a sense of patriotism and emphasise law and order as a means to retain harmony throughout the entirety of society.  A peaceful and orderly society can economically and materially grow and advance, and this is good for Buddhism.  The main points of this initiative is the development of unity and peaceful co-operation at all levels, so that everyone has a say, and that misunderstandings can be resolved.  This is part of the reconstruction process for a new and vibrant ‘Socialist’ Tibet.  The CPC has respectfully requested that the Buddhist establishments assist the government in this task, and focus their efforts upon the maintaining of a good and strong Buddhist practice.

This letter of gratitude is indicative of a reinvigorated Tibet.  The temples are orderly, clean and well managed, and the monks and nuns go about their daily practice with a smile upon their faces.  The Buddhist establishments advocate the following of law and order as part of the practice of Buddhism – both inside and outside the temple.  This CPC initiative has ironed-out any misunderstandings, and smoothed over any points of contention.  This policy has been so successful that all elements of disharmony have been thoroughly removed.  In this new era of greater transparency and openness, the Tibetan Buddhist establishment has reacted in a very profound manner, and has assisted the CPC with the reconstruction tasks at hand.  Of course, such a positive interaction has demonstrated the respect that Tibetans hold for the Communist Party of China, and shows the loyalty that Tibetans have toward the Chinese government.  This is very important as such a relationship serves as a bulwark against the corruption represented by the 14th Dalai Lama and his clique (that live a life of luxury in the West).  This clique seeks to infiltrate the Tibetan area of China through subterfuge, lying, misrepresentation, and serving the interests of anti-China foreign powers.  Tibet today is so self-confident and loyal to its own government, that the clique of the 14th Dalai Lama has suffered a serious defeat in China, with his agents being expelled or being forced to leave by the ordinary Tibetan people.  Tibetan people do not want the 14th Dalai Lama or the capitalist chaos he represents, but are happy and content today, and are fully behind the development of a ‘Socialist’ Tibet.

The letter emphasised that the relationship between the CPC and the Buddhist Sangha in Tibet has improved immeasurably, and that this harmonious relationship will be maintained and continued.  The benefits for the Tibetan people have been immeasurable as a consequence.  The CPC has clearly recognised the role of central importance that the Buddhist monks and nuns play within Tibetan culture, and have encouraged Tibetan monastics of all ages to apply for work in political positions throughout Tibet.  As the Tibetan people respect the monastics, it is correct that the monastics should hold political office.  As there has been a general (and massive) financial investment in Tibet, the monasteries have been modernised and updated, and the conditions the monastics live within have improved considerably.  These changes have been implemented by the CPC, but by and large the work has been carried-out by local Tibetan work-forces.  The CPC is of the opinion that the Buddhist monastic communities in China should follow the Vinaya Discipline and lead a peaceful and pious lifestyle.  The Buddhist establishments should be clean and tidy, and the monastics should be healthy.  The Buddhist communities, through various codes of practice, can enjoy this peaceful lifestyle, but must acknowledge the validity of secular law, and uphold secular law (encouraging this respectful attitude amongst the lay community).  As these changes have recently been successfully achieved, a great warmth has developed between the Tibetan Buddhist establishment (at the district, city and county level) and the local and national CPC.  As a result, Tibetan Buddhist monastics now sit on the National People’s Congress, and the Political Consultative Committee.  The Tibetan Buddhist monastics are very respectful toward the national government, and decided on their own volition to send a letter expressing their gratitude for the recent changes to the local and national CPC.

This letter reveals a seismic shift in attitudes in recent times, and clearly indicates the progressive nature of Socialism with Chinese characeristics.   Buddhism in Tibet is a special situation.  Buddhism is a central aspect of Tibetan identity that must be preserved and developed to flourish in a modern society.  As the CPC recognises this fact, and has obviously implemented policies to enact this objective, by and large, the monastic community of Tibet respects the government, is patriotic to the country, and is fully supportive of government initiatives.  Tibet is an important part of China that exercises considerable autonomy due to its special circumstances.  However, this freedom must be based upon firm patriotism toward the nation, and it is good for the Buddhist monastics to meditate, uphold the Buddhist and secular law, and carry-out rituals for the well-being of the nation.  The three major monasteries in Tibet have collectively expressed their gratitude to the CPC, and the CPC has confirmed that it will work toward a great new Socialist future for Tibet and the Tibetan people, that will be affluent, harmonious and peaceful.  The Tibetan people will achieve all this themselves, with the assistance of the CPC.  Tibet has achieved a great rejuvenation in recent years, and it is important that an advanced civilisation be constructed in a logical and step by step manner.  Following secular and the Buddha’s law, are of equal importance for the people of Tibet, and the CPC fully acknowledges this reality.