Declaration of the Vidyalankara Pirivena
Passed unanimously on February 13, 1946 (Ceylon) 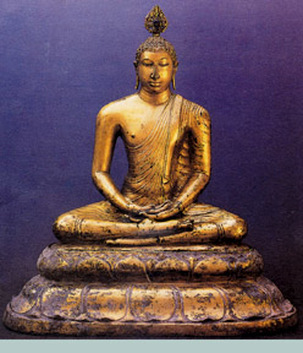 Transcriber’s Note:  This important historical text, in world revolutionary Buddhism, has been copy typed from the book entitled ‘The Heritage of the Bhikkhu’ by the Venerable Dr Walpola Sri Rahula (Grove Press, 1974 – Appendix II – Pages 131-135).  This book first appeared in 1946 in the Sinhalese language entitled ‘Bhiksuvage’, and was a protest against British colonial rule of the island nation, the Christianisation of its people, and the suppression of the Buddhist monastic community (or ‘Sangha’).  The Christian missionaries deliberately perpetuated the myth that Buddhist monastics (who historically had led the lay community and participated fully within lay society) were to mimic the cloistered behaviour of their Christian counter-parts.  This British imperialist policy of enforced isolation, removed the Ceylonese Buddhist monks from direct contact with the lay Buddhist community, so that the Christian missionaries could work unhindered in their task of mass converting the Buddhist masses to the Christian faith.  A number of bourgeois Ceylonese (who had become wealthy under British rule, and had gained a certain measure of political power) openly campaigned for the British system of suppressing the Sangha to remain in place, and for the Buddhist monastics to stop ‘meddling’ in political matters.  Unbelievably, certain Buddhist monastics with authority acquiesced to this imperialist decree, and issued local dictates forbidding the monks under their jurisdiction from assisting the lay Buddhist community, or from opposing the implementation of British (Christian) imperialist rule.  This situation prompted the leaders of the ‘Vidyalankara Pirivena’ (an important Buddhist monastic university founded in 1875), to issue this text entitled ‘Bhikkhus and Politics’, reaffirming that Buddhist monastics – ever since the time of the Buddha – have always acted in the best interests of the lay community, and have resisted any and all attempts to initiate political policies detrimental to the people’s well-being.  The Ven. Walpola Rahula dedicates his book ‘The Heritage of the Bhikkhu’ in the following manner: ‘To the memory of those thousands of bhikkhus and others who sacrificed their lives in the political struggle in Ceylon in 1971’.  The venerable bhikkhu is referring here to an island-wide Marxist-inspired uprising, that was ruthlessly and brutally put-down by the Ceylonese authorities.  There is more than a hint of Buddhism and Marxism acting in concord within Walpola Rahula’s book, and in this text issued by the Buddhist academic authorities.
ACW 4.9.2016

​
The Buddha permitted bhikkhus to change minor rules of the Vinaya if they so desire.  Nevertheless, there is no historical evidence to show that the bhikkhus of the Theravada school have on any occasion actually changed the rules of the Vinaya.  Likewise, we do not say that even now they should be changed.

But it has to be admitted that the political, economic, and social conditions of today are different from those of the time of the Buddha, and that consequently the life of bhikkhus today is also different from that of the bhikkhus at that time.

In those days the ideal of monks generally was to realise nirvana in their very lifetime.  In later times their ideal was to exert themselves to the best of their ability in activities beneficial to themselves and others with a view to realising nirvana in a future life.

It is clearly seen that as a result of this very change, a great many other changes not known in the earlier days took place in the life of bhikkhus in later times.

The extent to which the life of monks today has undergone change can be clearly grasped when we take into consideration the prevailing conditions of life in temples, monasteries, and pirivenas, the teaching and learning of Sinhala, Sanskrit and such other subjects, the present system of examination, the editing and writing of books and journals, conferring and accepting nayakaships and such other titles, participation in various societies and being elected as officers in them.  It has to be accepted, therefore, that, although the rules of the Vinaya have remained unaltered, the life of monks has undergone change and that this change is inevitable.

We believe that politics today embraces all fields of human activity directed towards the public weal.  No one will dispute that the work for the promotion of the religion is the duty of the bhikkhus.  It is clear that the welfare of the religion depends on the welfare of the people who profess that religion.  History bears evidence to the fact that whenever the Sinhala nation – which was essentially a Buddhist nation – was prosperous, Buddhism flourished.  We, therefore, declare that it is nothing but fitting for bhikkhus to identify themselves with activities conducive to the welfare of our people – whether these activities be labelled politics or not – as long as they do not constitute an impediment to the religious life of a bhikkhu.

We cannot forget that from the earliest days the Sinhala monks, while leading the lives of bhikkhus, were in the forefront of movements for the progress of their nation, their country, and their religion.

Even today bhikkhus by being engaged actively in education, rural reconstruction, anti-crime campaigns, relief work, temperance work, social work and such other activities, are taking part in politics, whether they are aware of it or not.  We do not believe that it is wrong for bhikkhus to participate in these activities.

We believe that it is incumbent on the bhikkhus not only to further the efforts directed towards the welfare of the country, but also to oppose such measures as are detrimental to the common good.  For example, if any effort is made to obstruct the system of free education, the great boon which has been recently conferred on our people, it is the paramount duty of the bhikkhu not only to oppose all such efforts but also to endeavour to make it a permanent blessing.

In ancient days, according to the records of history, the welfare of the nation and the welfare of the religion were regarded as synonymous terms by the laity as well as by the Sangha.  The divorce of religion from the nation was an idea introduced into the minds of the Sinhalese by invaders from the West, who belonged to an alien faith.  It was a convenient instrument of astute policy to enable them to keep the people in subjugation in order to rule the country as they pleased.

It was in their interests, and not for the welfare of the people, that these foreign invaders attempted to create a gulf between the bhikkhus and the laity – a policy which they implemented with diplomatic cunning.  We should not follow their example, and should not attempt to withdraw bhikkhus from society.  Such conduct would assuredly be a deplorable act of injustice, committed against our nation, our country, and our religion.

Therefore, we publically state that both our bhikkhus and our Buddhist leaders should avoid the pitfall of acting hastily, without deliberation and foresight, and should beware of doing a great disservice to our nation and to our religion.