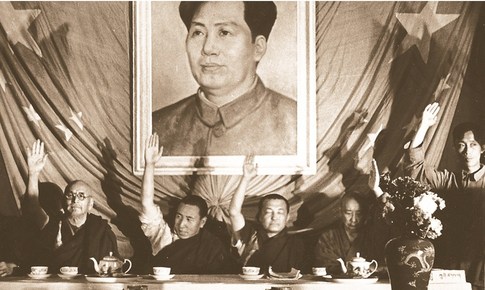 1) The name of the Buddhist – political organisation is:

a) Support Marxist-Leninism-Maoism and the International Communist Movement.
b) Support the academic study and verification of the positive view that both Karl Marx and Friedrich Engels had toward Buddhism.
c) Support the free education of the Masses with regard to correct Buddhist Philosophy, and Marxist Theory.
d) Dispel the myth that Buddhism is a religion.
e) Nullify the simplistic and incessant bourgeois propaganda that assaults the individual minds of the Masses.
f) Reject bourgeois Trotskyism in all its delusionary forms.
g) Reject the Pro-Tibetan Movement as a bourgious CIA diversion.
h) Support the Cuban Revolution.
I) Support South American Communism.
j) Support the People's Republic of China.
k) Support the Democratic People's Republic of Korea.
l) Support the Socialist Republic of Vietnam.

3) The BMA (UK) supports the political study of:

4) The BMA (UK) supports the psychological study of:

Meditation is an effective method for the uprooting of bourgeois psychological conditioning, created and sustained throughout history.  The International Working Class can free their minds from the tyranny of history through meditation.  Meditation is mental discipline.  With inner discipline the outer world can be transformed.  The Buddha’s teachings exist in the outer world, find and make use of them but do not fall into religiosity.

5) The BMA (UK) agrees that the Buddha’s enlightenment, and the genius of Marx represents a common ground, and that the Buddha and Marx are both progressive and advanced in their respective theories of emancipation.

6) The BMA (UK) agrees that a good Buddhist is a good Marxist.

7) The BMA (UK) protects genuine Buddhism and Marxism from the destructive revisionism of the bourgeoisie.

8) The BMA (UK) acknowledges that a good and sound education is the best form of agitation against the bourgeoisie.

9) The BMA (UK) acknowledges that the Rightwing, as a non-intellectual tradition – represents extremism premised entirely upon greed, hatred, and delusion.  In this regard, and all others, Rightwingism represents a dangerous mental illness that must be, like any illness that afflicts humanity, eradicated through the applying of the correct medicine.  Correct (Buddhist and Marxist) knowledge is this medicine.

10) BMA (UK) Political Commissars are the spiritual and material foundation of the people.

12) The BMA (UK) encourages its individual Members to join the Communist Party.