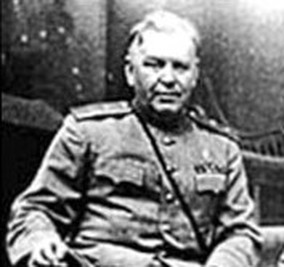 Stalin’s Personal Bodyguard Nikolai Vlasik (1896-1967)
Translator’s Note:  As someone with an interest in advanced Chinese martial arts practice, (and the study of the scientific generation of psychological and physical power with minimal effort), I was fascinated to be introduced to the modern Russian martial art of ‘Systema’ (a word apparently meaning ‘system’ in English), in the early 2000’s.  Recently, I was asked about the similarity between Systema’s relaxed and aligned power-hitting (and ability to absorb blows safely into the muscle mass, bones and joints), and the practice of the Chinese ‘internal’ martial arts of Taijiquan, Bagua Zhang/Quan and Xingyi, etc. It has been commented elsewhere that Russian Systema appears to represent the highest psychological and physical aspects of ‘internal’ power-generation, as witnessed in China for thousands of years. However, when accessing contemporary English texts regarding Systema, I was dissatisfied with the extent of background knowledge being presented to the general reader.  Post-Soviet Systema appears to be represented as if it only recently ‘appeared’ out of nowhere, (either expunging any mention of the former Soviet Union from its history, or down-playing such an association), whilst illogically claiming an ‘ancient’ origin. To remedy this contradiction and lack of genuine historical information, I have accessed the Mainland Chinese language internet (Baidu), and translated below, portions of an interesting document entitled ‘Russian Military Police Unarmed Combat Art – Systema’ (俄罗斯军警格斗术——西斯特玛). No matter how old Systema may be, it underwent a radical rationalisation within the Soviet system that advocated the use of science over mythology and religiosity.  Regardless of how unusual Systema may look today, when compared to conventional martial arts in either their modem or traditional aspects, it is in fact the presentation of advanced body mechanics and the application of sound physics to a combat situation, and there is nothing ‘mystical’ or ‘faith-based’ about any of its techniques.  Finally, the modern Systema practitioner - Mikhail Ryabko - claims to have learned this ‘secret’ Soviet art directly from Stalin’s bodyguard - Nikolai Vlasik – in the early 1960’s.
ACW 25.11.2016


Within the Soviet Union, the ancient Russian martial art of ‘Systema’ was historically researched, and the scientific component of its combative techniques emphasised, refined, and developed into a highly effective martial system, that was renowned for its efficient generation of power (not reliant upon muscular tension), and a defensive ability that utilised not only natural muscle-mass, but also the (aligned) bones and joints, etc.  As the Soviet Union was looking for an advanced martial art premised upon scientific principles (as opposed to religious or mythological principles), this martial art was adopted for use by the Soviet military, with a particular emphasis upon Soviet Special Forces, (a military formation often called upon to carry-out unusual or highly hazardous operations).  To avoid any connection with petty nationalist or religious thinking, this ancient Russian martial art was simply code-named ‘Systema’, or in English translation, ‘System’.  The Soviet Authorities, not wanting this advanced, scientific martial knowledge to fall into enemy hands, its practice was limited to the military.  This was in-part a reaction against any notions of religiosity or mythology that might have still existed in the attitudes of certain members of the general public.  As superstition was not encouraged under the Soviet system, knowledge of Systema amongst the general public receded, and ‘scientific’ Systema became associated only with the Soviet military.  However, since the collapse of the USSR (in 1991), Soviet Systema began to spread through the general population in Russia, and out into the world, with considerable vigour.  This has coincided with the opening of the Soviet Archives, and the exposure of the Soviet martial art of Systema – which was kept secret during the Cold War, to stop its advanced scientific martial method falling into the hands of the capitalist West.  Also since 1991, former Soviet military personnel have retired and settled in the West, taking their knowledge of Systema with them.  One such figure who features prominently in the preservation and continuation of Systema is Mikhail Ryabko.  Mikhail Ryabko was born in 1961, and due to his family’s connections in the Soviet Union, trained with Joseph Stalin’s former bodyguard in Systema.  He was so proficient in Systema, that by the age of 15, he was able to be recruited into the Soviet Special Forces, where he eventually reached the rank of colonel, and became an advisor to the Soviet government. As he has matured, Mikhail Ryabko has continued to develop Systema in the West (and Russia), writing down (and publishing) all his knowledge of this previously ‘secret’ Soviet martial art. He has publicised and popularised Systema to a broad and general audience in an attempt to preserve its teachings.  Mikhail Ryabko remains the leading teacher of Systema today, with his top student - Vladimir Vasiliev – officially teaching Systema through his martial arts school in Ontario, Canada.

Both Mikhail Ryabko and Vladimir Vasiliev, have done much research to develop Systema from being a closed Soviet military art, to one relevant to the general public.  This process has invigorated Systema and created a rejuvenated martial art, available for all to learn.  Systema’s relaxed and aligned technique has led to many to refer to this art as being a form of Soviet (Japanese) ‘aikido’, or Soviet (Chinese) ‘Taijiquan’, when in fact this distinctly ‘Russian’ martial art is completely unrelated to these other martial arts.  However, despite this lack of an observable historical link with Taijiquan (or Aikido), nevertheless, the technique of Systema is very similar to these two martial arts.  However, (Soviet) Systema utilised scientific analysis of the human body and mind to create a martial system emphasising the following:

This research has continued through modern, Russian Systema, with the advanced study of perceptual psychology, anatomy and physiology serving as the scientific basis for further Systema development.  Pain is a physical response to the exterior of the body being struck, and the nerve impulses responding appropriately by transmitting this data to the spine and brain.  Breathing in a particular manner not only dissipates the incoming power harmlessly through the exterior body tissue, but also nullifies the ‘pain’ response in the body.  The natural posture envelops each aggressive move – immediately transforming each defensive movement into an efficient attack. As the Systema practitioner ‘merges’ quite naturally with the attacker’s techniques, the attacker is essentially neutralised through his or her aggressive technique.  As the attack is immediately nullified and ‘turned-back’ upon the attacker, the attacker has no time to ‘think’, or adjust the posture for another attack.  In such an exposed position, defence is the only option for the aggressor, but as the Systema practitioner has already ‘penetrated’ the attacker’s defence, the stance-work is ‘uprooted’ and all further threat neutralised.  Systema free-hand fighting emphasises the development of endurance, explosiveness, and sensitivity, all achieved in a natural and unhurried manner, despite the tempo of the fight.  Even if the fight is ‘fast’, the Systema practitioner simply envelops the attack and reduces it to zero movement (and zero threat).  Systema teaches the practitioner to end any violent encounter in the most efficient and quickest manner.  This is achieved through a very high degree of unified and ‘aligned’ postural positioning and movement.  The Systema practitioner moves the entire body in an over-all co-ordinated manner that allows each limb the freedom to locally adapt to rapidly changing circumstances and conditions.  Any part of the body can be used as a weapon, and the Systema practitioner can fight standing-up or on the ground (similar to Brazilian Ju Jitsu). It makes no difference what orientation the human body occupies, as the scientific thinking behind Systema is used to adjust to the circumstance.  This is because gravity and body mechanics always exist, providing the practitioner is existing within a gravitational field.

A major advantage of the Systema system is that any object can be used as a weapon, and not just military hardware.  A mobile telephone, a notebook or even a pen can be used for self-defence or attack in Systema.  Systema always tries to minimise injuries in training by emphasising the correct understanding and use of the human body.  However, as the Soviets developed Systema as a military art, correct knowledge of anatomy and physiology allows the practitioner to fully understand all the strengths and weaknesses of the human body (and mind), and use that knowledge to inflict maximum damage on an opponent in times of warfare.  Of course, in times of peace, and when training civilians, this knowledge is present, but its application is always controlled and applied in a less aggressive fashion.  However, each Systema practitioner possesses the ability to adjust the level of intended ferocity, according to prevailing necessity.  Systema practitioners possess many ingenious methods for taking a standing opponent to the ground.  The point of Systema ground-fighting is not to participate in a pro-longed ‘sporting’ encounter, but rather to permanently ‘remove’ the opponent’s ability to respond.  Being an essentially Soviet-style of military training, Systema’s use of weaponry is subtle, as even the different areas of a knife-handle (irrespective of the blade) can be used as a lethal weapon.  Just like in many advanced Asian martial arts, the Systema practitioner aims directly at the body’s weak-points – such as the throat or eyes, etc.  Finally, the (Soviet) Systema martial art has its foundation in correct breathing.  This means that Systema has a modern and efficient ergonomic theory of scientifically guiding the breath. This allows the Systemic practitioner to breathe over a few minutes, so that the body's energy is balanced, instantly improving speed and strength. Correct breathing keeps the body oxygenated and free from tiredness or exhaustion during self-defence.  Breathing whilst relaxed and aligned allows for incoming energy to be dissipated harmlessly through the exterior body tissue.  Furthermore, should a Systema practitioner be attacked by attempted suffocation – the scientific breathing technique allows the defender to break free and escape the attack.

In this modern age, Systema has adapted to entirely new conditions, with its contemporary Russian teachers travelling the world, and recording their knowledge on the internet and through DVD.  There is every reason to believe that this once advanced Soviet system of self-defence can now be developed to benefit everyone who encounters it, regardless of where they live. Ordinary people, as well as military personnel, or even bodyguards can all benefit from its advanced, scientific basis.  This ancient Russian martial art of Systema was evolved during the Soviet era, and continues to be developed along scientific lines today.  Therefore, Systema represents a rational approach to self-defence and combat, that even in post-Soviet Russia, remains free of superstition, religiosity and mythology.