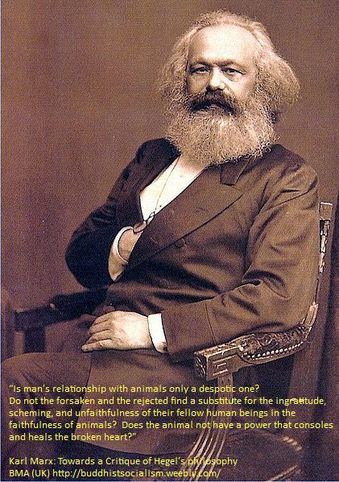 The meat industry is nothing more than the capitalisation of the bodies of animals.  This is the turning of other living beings into a ‘commodity’ that can be bought and sold, whilst completely ignoring the fact that these bodies are ‘alive’, have feelings and are afraid of dying and terrified of the ‘killing’ process.  The Judeo-Christian approach is that most animals are placed on the earth for use by humans – with human beings ‘special’ because they are made in god’s image.  Animals, of course, can be worked to death, brutalised, murdered and eaten because they are ‘not’ made in god’s image.   I find this a very dangerous precedent to set that in the human world it can be easily extended to categorise human ethnic groupings into ‘desirable’ and ‘undesirable’ – with the eradication of the groups that do not conform to what are in essence, entirely arbitrary categorisations of ‘pure’ and ‘impure’.  Prior to the Industrial Revolution, ordinary people ate mostly fruit and vegetables (which were readily available) and tended to avoid meat-eating because animals were precious agricultural workers – or produced other useful commodities such as milk, cheese and wool, etc.  Only the upper classes could afford to eat meat, and pay for these valuable animals to be raised, looked after, killed, cooked and eventually eaten.  After the Industrial Revolution, farmers switched the emphasis of their out-put from crop production, to the rearing of animals for meat production, because ‘meat’ fetched a greater profit than ‘fruit’ and ‘vegetables’.  Even though meat-eating is not good for human-beings, the propaganda that treating animals terribly and then killing them for food has become the a priori norm for modern, Western society.  However, this despicable industrialised farming method can be beaten in two revolutionary ways:

1) Dietary Change - Do not eat meat.
2) Economic – Do Not Buy Meat or Animal Products.

Education is the means to achieve both of these objectives.  Adults should bring their children up as vegetarians and take them to petting farms to interact positively with many different kinds of animals.  This breaks-up the underlying Judeo-Christian cultural approach that killing animals and eating them is correct.  It also removes children from the capitalistic economic cause and effect that conditions individuals to purchase and eat meat without thinking, as if it is natural and there is no alternative.  The industrialised farming business can be brought to its knees by directing the productive forces of capitalist society to modify its incessant search for profit away from meat production, and to that of catering for the needs of vegans and vegetarians.  This action may be viewed as ‘revolutionary’ as it undermines the capitalist system.  Alternative non-meat-eating diets involve:

1) Veganism – a vegetarian diet with no eggs, milk, cheese or the consumption or use of any other animal-related products.

2) Vegetarian – no meat products consumed – but may eat eggs, milk and cheese.  Many vegetarians move toward veganism by drinking soya milk, and consuming vegan cheese and egg-substitute.

3) Pescetarian – a vegetarian diet consuming no meat products, but continuing the consumption of fish and sea-food.

4) Fruitarian – a sub-vegan diet of consuming only botanical fruit supplemented by nuts and seeds.  Some strict fruitarians consume only fruit that has naturally fallen from trees.