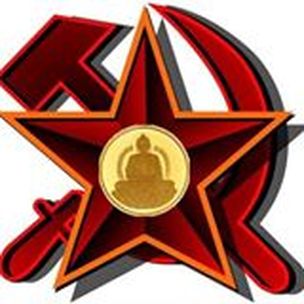 ‘It is often assumed in the West that theistic belief is the only possible way in which a man or civilisation can be spiritualty orientated.  A major refutation of this assumption is provided by Buddhism.  It is possible that Marxism may provide another but, as yet, it has not had as long a period as Buddhism in which to demonstrate its capacity in this direction.  What they have in common is that they both begin from a vision of a new civilisation which will enable man to grow and develop into a quality of life beyond what he has known hitherto.  In neither case, however, does this vision need to be legitimated by reference to belief in a supreme divine being.  The sanctions in both cases are philosophical rather than theological; in the case of Buddhism they are also to some extent derived from what, for brevity, may be psychological experience.’

(The Buddha: By Trevor Ling – Page 33)
The Buddha and Marx firmly rejected theistic religion as a means to reliably interpret the true nature of material reality.  For Marx this rejection was aimed at the Judeo-Christian tradition relevant to the West, and for the Buddha it was the Brahmanic religion prevalent in ancient India.  Both religions had gained political power and inflicted their respective theologies upon the masses that they held in a state of psycho-physical enslavement.  As theology defined reality, the human mind was unable to breakout of its limited conditionality.  Marx declared that the bourgeois mind-set was the product of religious inverted thinking that turned the perception of reality upside down and the wrong way around.  Earlier the Buddha had declared exactly the same interpretation by stating that Brahma as an all-knowing and all-powerful theistic entity did not exist, and that the social structure of caste (which was used to worship him through subjugation for the lower castes and privilege for the upper castes) was thoroughly incorrect and constructed upon a false premise.  The analytical philosophy of Buddhism and Marxism, once it has defined the illogicality of religious thinking as a political ideology, then goes on to critique ‘greed’ and any and all notions premised upon it.  For the Buddha it was caste interest, whilst for Marx it was class interest, as well as the acknowledgement that ordinary human beings generally operated from a false (class or caste) consciousness.  For greed and false thinking to be eliminated, the inversion that signifies false thinking must be rectified through education and wholesome experience.  This is why Buddha and Marx put a great emphasis upon self-education and physical effort (labour) as a means of revolutionising both the inner and outer world (which are linked in essence through a special arrangement of matter).  Karl Marx states (in the Theses on Feuerbach – Thesis III):

‘The materialist doctrine concerning the changing of circumstances and upbringing forgets that circumstances are changed by men and that it is essential to educate the educator himself. This doctrine must, therefore, divide society into two parts, one of which is superior to society.

The coincidence of the changing of circumstances and of human activity or self-changing can be conceived and rationally understood only as revolutionary practice.’ [1]

Marx and Buddha rejected ‘gross’, or ‘metaphysical’ materialism, as well as any idealistic notions.  Undoubtedly reality is both ‘materiality’ and ‘consciousness’, but consciousness is viewed as arising out of an association with matter and not the other way around.  Reality is the realisation of the innate association between matter and mind in such a way that there is no contradiction or false duality.  This insight frees the mind from the hold of theism and the notion that a theistic entity created physical matter (and the diversity of life) as if out of nothing.  The Buddha, within his famous Four Noble Truths, clearly states that ‘consciousness’ only exists as long as a sense organ is in contact with a sense object – when that connection is lost, consciousness ceases.  Training is achieved through the recognition that cause and effect unfolds in a logical and generally predictable manner.  The Buddha referred to this as the law of karma, whilst Marx developed its premise into the principal of historical materialism.  Correct training (of a non-inverted nature) can eradicate the corrupt and illogical thinking associated with the bourgeoisie and the Brahmanic religion.  This frees each individual and each class so that they are no longer compelled by conditioned habit to actively participate in their own oppression and exploitation.  Marx writes (in the Theses on Feuerbach – Thesis XI):

‘The philosophers have only interpreted the world, in various ways; the point is to change it.’

‘There are, O monks, three roots of the unwholesome: greed, hatred and delusion.

Buddha and Marx seek to revolutionize society through education and radical action.  Even in the Buddha’s day in ancient India, convincing a ruler to adhere to Buddhist principles was an important revolutionary factor in the Buddha’s social action.  The Buddha prevented violence and wars through the use of reasoned logic and he exercised a type of militant non-violence toward the Brahmanic system.  Marx advocates exactly the same policy but adjusts it for modern post-industrial times – he prefers peace and is opposed to the capital punishment (as well as bourgeois imperialism and war), but is also pragmatic in that he declared that the working class – whose bodies and minds are always under attack from the bourgeois oppressors – had a right to defend themselves from this violence.  This is why he stated that violence exists only as long as there is (bourgeois) resistance to the establishment of Socialism.  The Buddha established a form of Socialism within his monastic community which by and large was entirely communistic.  This attitude of equality of indifference to social rank permeated amongst lay-Buddhist followers who still lived within a Brahmanic social setting.  This Buddhist influence would eventually achieve the peaceful over-throw of the Brahmanic system and influence various monarchs in their governance of India.  In the modern capitalist world, the ability to sit quietly and meditate can help an exploited person take control of their own minds and free themselves from the socio-economic conditioning of the bourgeois state.  As the Buddha’s logic is designed to ‘clear’ the mind of surface obscuration, this has become an excellent tool of self-development for the modern Marxist which can be effectively integrated with the study of the writings of Marx (and Engels). Buddhist meditation allows for a self-contained study that helps transform the thought patterns of the mind without the need to become embroiled in the expensive bourgeois world of psychotherapy and counselling, etc.  This is an important point as bourgeois psychology and psychiatry - subjects which are by definition the product of privileged academics that embody a natural middle class prejudice within their respective developmental and analytical theories - continues to ‘alienate’ the masses whilst seeking apriori to ‘normalize’ capitalist oppression in the minds of the working class so that they can continue to be exploited in a quiet and socially acceptable manner, making little or no complaints.  When this situation of cause and effect is not understood, the middle class retains its social and cultural power within academia by demeaning any working class attempt to break free of its grip.  The Buddhist method of meditation (and the logical assessment of reality contained within it) is a powerful psychological developmental technique in the fight against the capitalist system and in the positive (and non-violent) transformation of society.  As the Buddha’s thinking firmly rejects the ancient Indian status quo, it lends itself very easily to the use of the working class in the socio-economic context of the modern West.