The Dhammic Statements of Karl Marx 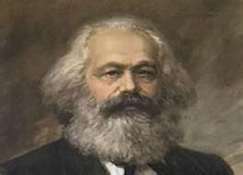 ‘The class that possesses the means of material production, by virtue of this also possesses the means of spiritual production…  The individuals composing the ruling class possess, among other things, consciousness as well, and by virtue of this, think.  In so far, therefore, as they rule as a class and determine the extent and scope of an epoch, it is self-evident that they do this in all its spheres, hence rule also as thinkers, as producers of ideas, and regulate the production and distribution of the ideas of their age; and that means that their ideas are the dominant ones of the epoch.’  Marx and Engels

You are horrified at our intending to do away with private property. But in your existing society, private property is already done away with for nine-tenths of the population; its existence for the few is solely due to its non-existence in the hands of those nine-tenths. You reproach us, therefore, with intending to do away with a form of property, the necessary condition for whose existence is the non-existence of any property for the immense majority of society.  Karl Marx - The Communist Manifesto

A house may be large or small; as long as the neighbouring houses are likewise small, it satisfies all social requirements for a residence. But let there arise next to the little house a palace, and the little house shrinks to a hut. The little house now makes it clear that its inmate has no social position at all to maintain, or but a very insignificant one; and however high it may shoot up in the course of civilization, if the neighbouring palace rises in equal or even in greater measure, the occupant of the relatively little house will always find himself more uncomfortable, more dissatisfied, more cramped within his four walls.  Karl Marx - Wage Labour and Capital

If we have chosen the position in life in which we can most of all work for mankind, no burdens can bow us down, because they are sacrifices for the benefit of all; then we shall experience no petty, limited, selfish joy, but our happiness will belong to millions, our deeds will live on quietly but perpetually at work, and over our ashes will be shed the hot tears of noble people.  Karl Marx - Letter to His Father

History calls those men the greatest who have ennobled themselves by working for the common good; experience acclaims as happiest the man who has made the greatest number of people happy.  Karl Marx - Letter to His Father

We develop new principles for the world out of the world’s own principles. We do not say to the world: Cease your struggles; they are foolish; we will give you the true slogan of struggle. We merely show the world what it is really fighting for, and consciousness is something that it has to acquire, even if it does not want to. Karl Marx - Letter from the Deutsch-Französische Jahrbücher to Ruge

Communism is for us not a state of affairs which is to be established, an ideal to which reality [will] have to adjust itself. We call communism the real movement which abolishes the present state of things. The conditions of this movement result from the premises now in existence.  Karl Marx - German Ideology