The Four Brahmaviharas of Buddhism 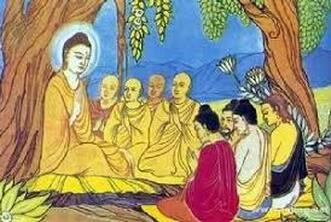 Although what might be translated as the ‘Abode of God’, this Buddhist term, as usual, completely re-interprets this earlier Brahmanic term, so that it becomes both logical and secular. What the Buddha means by this Pali term is very different to what Hindus might mean by it. For the average Hindu, a ‘Brahmavihara’ is a holy place (‘vihara’), where people gather to ‘worship’ Brahma. More to the point, a ‘Brahmavihara’ is a sacred area within which human-beings are able to seek, find and unite with ‘god’.  A ‘vihara’ is the term eventually used to describe a permanent (Buddhist) monastic institution. The Buddha occasionally mentions ‘Brahma’ (and one or two other Hindu gods), but only in the context that he – as the ‘teacher of gods and men’ (Satthu deva manussanam) - is guiding this ‘limited’ theistic being to a higher plane of existence. Brahma, for the Buddha, is not to be worshipped, but rather pitied and treated with compassion and understanding, and led out of the karmic trap that he inhabits. Brahma is trapped in his good karma, and is unable to break free of the cycle of samsara on his own, such is the seductive power of inhabiting the theistic realms. The four Buddhist ‘Brahmaviharas’ are as follows:

2) Compassion and loving kindness for all beings (Karuna)

4) Indifference to pain and pleasure, and non-attachment to all pairs of opposites (Upeksa)

These four attributes appear to be the foundation of Early Buddhist monasticism. An Ordained monk or nun, freed as he or she is of family concerns and the need to work in the conventional world, is free to continuously discipline the mind and body, and cultivate these four pre-requisites for the attainment of Buddhist enlightenment. Lay-people are able to apply these teachings if they want to try, and the Pali Suttas record a number of lay-people who realised complete enlightenment regardless of their social responsibilities and assumed distractions. Some realised the essence of their minds by being in the presence of the Buddha, personally listening to the Buddha teach, or hearing the Buddha’s teaching from somebody else. Perhaps this ‘direct’ path to enlightenment is believed to be premised on the accumulation of good (developmental) karma generated by previous good actions and thoughts (perhaps even in another existence). On the other hand, the Buddha was nothing if not practical, and he understood that the average human-being requires a tremendous effort to achieve enlightenment, and that this effort quite often has to be pursued away from conventional society and steeped deep in the solitude of the forest far away from the distractions of civilisation. Effort has to be made, and if any effort is to be successful, it must possess an effective method. The Buddha, using a term which most Hindus would understand, used a concept (‘Brahmavihara’) that although familiar, had virtually no relation to the Brahmanic theology from which it originated. Hindus might have been attracted to the Buddha’s use of apparent Brahmanic terms which bear no resemblance to the religion of Hinduism itself.

A Buddhist monastic was expected to cultivate these four attributes throughout the day and night, and never to allow the mind and body to deviate away from these methods. Whether sitting, standing, walking or lying-down, a Buddhist monastic was expected to cultivate all four attributes simultaneously, but with the caveat that when sat in meditation, these attributes might be worked on one at a time, so that their associated technique of practice becomes strengthened, clarified, directed and expanded. Regular periods of intense seated meditation occur throughout the day, with the fruits of that meditation applied to the everyday life of the monastic that manifests ’between’ these periods of meditative practice.  This is nothing short than the cultivation of ‘non-attachment’ to all thought, or to put it another way, the cultivation of ‘non-identification’ with personal thought (and feeling).