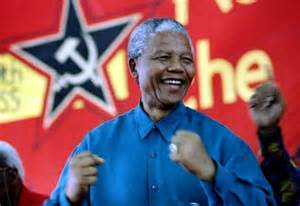 Education is the most powerful weapon which you can use to change the world.

It was during those long and lonely years that my hunger for the freedom of my own people became a hunger for the freedom of all people, white and black.  I knew as well as I knew anything that the oppressor must be liberated just as surely as the oppressed.  A man who takes away another man’s freedom is a prisoner of hatred, he is locked behind the bars of prejudice and narrow-mindedness.  I am not truly free if I am taking away someone else’s freedom, just as surely as I am not free when my freedom is taken from me.  The oppressed and the oppressor alike are robbed of their humanity.

I learned that courage was not the absence of fear, but the triumph over it. The brave man is not he who does not feel afraid, but he who conquers that fear.

I acquired the complete works of Marx and Engels, Lenin, Stalin, Mao Tse-tung and others, and probed the philosophy of dialectical and historical materialism.  I had little time to study these works properly.  While I was stimulated by the Communist Manifesto, I was exhausted by Das Kapital.  But I found myself strongly drawn to the idea of a classless society which, to my mind, was similar to traditional African culture where life was shared and communal. I subscribed to Marx’s basic dictum, which has the simplicity and generosity of the Golden Rule: ‘From each according to his ability; to each according to his needs.’

I detest racialism, because I regard it as a barbaric thing, whether it comes from a black man or a white man.

Dialectical materialism seemed to offer both a searchlight illuminating the dark night of racial oppression and a tool that could be used to end it.  It helped me to see the situation other than through the prism of black and white relations, for if our struggle was to succeed, we had to transcend black and white. I was attracted to the scientific underpinnings of dialectical materialism, for I am always inclined to trust what I can verify.

Marxism’s call to revolutionary action was music to the ears of a freedom fighter.  The idea that history progresses through struggle and that change occurs in revolutionary jumps was similarity appealing.  In my reading of Marxist works, I found a great deal of information that bore on the types of problems that face a practical politician. Marxists gave serious attention to national liberation movements, and the Soviet Union in particular supported the national struggles of many colonial peoples.

No one is born hating another person because of the colour of his skin, or his background, or his religion. People must learn to hate, and if they can learn to hate, they can be taught to love, for love comes more naturally to the human heart than its opposite.

Our strategy was to make selective forays against military installations, power plants, telephone lines and transportation links; targets that would not only hamper the military effectiveness of the state, but frighten National Party supporters, scare away foreign capital, and weaken the economy. This we hoped would bring the government to the bargaining table.

Your worship, I hate racial discrimination most intensely and in all its manifestations.  I have fought it all my life.  I fight it now, and I will do so until the end of my days.  I detest most intensely the set-up that surrounds me here.  It makes me feel that I am a black man in a white man’s court.  This should not be.

Whatever sentence Your Worship sees fit to impose upon me for the crime for which I have been convicted before this court, may it rest assured that when my sentence has been completed I will still be moved, as men are always moved, by their conscience; I will still be moved by my dislike of the race discrimination against my people when I come out from serving my sentence, to take up again, as best I can, the struggle for the removal of those injustices until they are finally abolished once and for all…

Routine is also comforting for the prisoner, which is why it can be a trap.  Routine can be a pleasant mistress whom it is hard to resist. For routine makes the time go faster.  Watches and timepieces of any kind were barred on Robben Island, so we never knew precisely what the time was.

The challenge for every prisoner, particularly every political prisoner, is how to survive prison intact, how to emerge from prison undiminished, how to conserve and even replenish one’s beliefs.

But the human body has an enormous capacity for adjusting or trying circumstances.  I found that one can bear the unbearable if one can keep one’s spirits strong even when one’s body is being tested.  Strong convictions are the secret of surviving deprivation; your spirit can be full even when your stomach is empty.

I raised my fist to the crowd, and the crowd responded with an enormous cheer.  Those cheers fired me anew with the spirit of the struggle.

Friends, comrades and fellow South Africans.  I greet you all in the name of peace, democracy and freedom for all!  I stand here before you not as a prophet but as a humble servant of you, the people. Your tireless and heroic sacrifices have made it possible for me to be here today.  I therefore place the remaining years of my life in your hands.

Death is something inevitable. When a man has done what he considers to be his duty to his people and his country, he can rest in peace. I believe I have made that effort and that is, therefore, why I will sleep for the eternity.