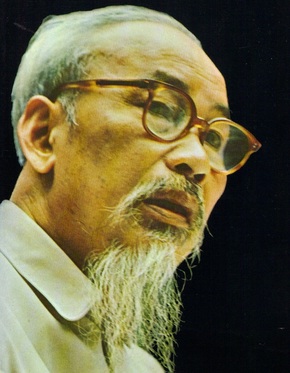 How Lenin is revered in the East, and notably in my country, Indochina. He is leader and guide and teacher to the European workers, but for Unpeoples of the East he is something still more.  We Vietnamese patriots had been in darkness and did not see how to liberate our countries. Lenin showed us the way, and we will never depart from it.

Remember that the storm is a good opportunity for the pine and the cypress to show their strength and their stability.

The Vietnamese people deeply love independence, freedom and peace. But in the face of United  States aggression they have risen up, united as one man.

Love other human beings as you would love yourself.

You can kill ten of my men for every one I kill of yours, but even at those odds, you will lose and I will win.

Write in such a way as that you can be readily understood by both the young and the old, by men as well as women, even by children.

When the prison doors are opened, the real dragon will fly out.

In the eyes of the people of the East, Lenin was not only a leader, a commander.  He irresistibly attracted our hearts.  Our respect for him was close to filial piety, one of the fundamental virtues in our country.  For us, the victims of ill-treatment and humiliation, Lenin was the embodiment of human fraternity.

If you are a Party activist, you must yourself be the bearer of truly revolutionary morality.  People must trust, respect, and love you.  For them to trust you, you must be honest and sincere in everything you do.  For them to respect you, you must share all their misfortunes.  For them to love you, you must honour the elderly, respect the women, and treat the children like a father.  Last but not least, you must always respect local customs, no matter how strange they might appear.  As the saying goes, it’s better not to pay your taxes to the king than to violate the customs of the village.

Among those who sympathise with the revolutionary cause, you can single out three categories.  There are those who, once embarked on the path of struggle, remain faithful to it to the end of their days.  Others seem to first throw themselves passionately into the revolution, but then, after facing the police once or twice, withdraw, like a snail into its shell.  Still others, on the contrary, are infuriated by police reprisals and become active revolutionaries.  That is why we should not be afraid of reprisals.  Like a sieve they separate the weak from the staunch and committed. It often happens that after a wave of reprisals, only three or four remain loyal to the cause, while the rest fall back.  That doesn’t matter the main thing is to convince as many people as possible that the revolution is close.  Then even if they are afraid to contact us, their hearts will belong to the revolution. They are poor, they hate the feudal lords and colonialists, and they yearn to see their country liberated.  As soon as the thunder of the revolution echoes, they will immediately join.

Why not quote the well known saying; one tree is a tree, three trees are a high mountain?  Or else tell them of the chopsticks: it’s easy to break one chopstick, but try breaking a bundle!  People will then understand what solidarity is all about.

There must be freedom of religious practice.