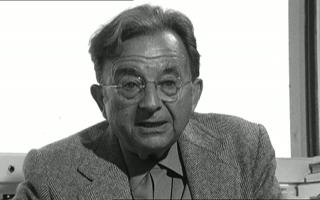 The number of people who understand Marx today, really understand Marx, is very small.  That may sound arrogant if I say that just about everybody is wrong except for me and a few others.  I don’t mean to be so sweeping in my judgement, but I do feel most Marx experts overlook the fact that Marx’s thought is essentially religious, though not “religious” in the sense that it posits any faith in God.  Buddhism isn’t religious in that sense either.  Buddhism does not recognise a god, but it is religious in its central belief that we have to transcend our narcissism, our egoism, our inner isolation, and open ourselves to life, that we -  as Meister Eckhart would put it – have to make ourselves empty so that we can be made full, so that we can become whole.  That belief, expressed in different words, is at the heart of Marx’s work.  I’ve often had a little fun reading selections from Marx’s economic and philosophical manuscripts to various people.  I recall a meeting I had with Dr Suzuki, an eminent figure in Zen Buddhism. I read him some passages without telling him who had written them, and then I asked him: Is that Zen?  Yes, of course, he said.  That’s Zen.  Another time I read some similar passages to a group of very learned theologians, and their guesses ranged from all kinds of classical authors, such as Thomas Aquinas, to the most modern theologians.  Not one of them suspected that the author was Marx.  They simply didn’t know Marx.  (Fromm, Eric, For The Love of Life, The Free Press (1986), Pages 103-104)

Perhaps the most fundamental form of expressing the goal and the meaning of living is common to the traditions of both the Far East and Near East (and Europe): the “Great Liberation” – liberation from the dominance of greed (in all its forms) and from the shackles of illusions.  This double aspect of liberation is to be found in systems such as Indian Vedic religion, Buddhism, and Chinese and Japanese Zen Buddhism, as well as in a more mythical form of God as supreme king in Judaism and Christianity.  It finds its crowning development (in the Near East and West) in Christian and Muslim mystics, in Spinoza, and in Marx. In all these teachings, inner liberation – freedom from the shackles of greed and illusions – is inseparably tied to the optimal development of reason; that is to say, reason understood as the use of thought for the purpose of satisfying one’s need.  This relation of freedom from greed and the primacy of reason is intrinsically necessary.  Our reason functions only to the degree to which it is not flooded with greed.  The person who is the prisoner of his irrational passions loses the capacity for objectivity and is necessarily at the mercy of his passions; he rationalises when he believes he is expressing truth.  (Fromm, Eric, The Art of Being, Constable – London (1997), Page 6)

Nationalism is our form of incest, is our idolatry, is our insanity. 'Patriotism' is its cult... Just as love for one individual which excludes the love for others is not love, love for one's country which is not part of one's love for humanity is not love, but idolatrous worship.  (Eric Fromm)

Our conscious motivations, ideas, and beliefs are a blend of false information, biases, irrational passions, rationalizations, prejudices, in which morsels of truth swim around and give the reassurance albeit false, that the whole mixture is real and true. The thinking processes attempt to organize this whole cesspool of illusions according to the laws of plausibility. This level of consciousness is supposed to reflect reality; it is the map we use for organizing our life.  (Erich Fromm: To Have or to Be? The Nature of the Psyche)

In the literature on Zen Buddhism there are writers such as DT Suzuki, whose authenticity is beyond doubt; he speaks of what he has experienced.  The very fact of this authenticity makes his books difficult to read, because it is of the essence of Zen not to give answers that are rationally satisfying. There are some other books, which seem to portray the thoughts of Zen properly but whose authors are mere intellectuals whose experience is shallow.  Their books are easier to understand, but they do not convey the essential quality of Zen.  Yet I have found that most people who claim to have a serious interest in Zen have not noticed the decisive difference in quality between Suzuki and others. (Fromm, Eric, The Art of Being, Constable – London (1997), Page 12)

Only paradoxical thinking, so much a part of Eastern Logic, permits expression of the full reality: Man is a unique individual – man’s individuality, the clearer I see through myself and him the reality of universal man, freed from all individual qualities, “the Zen Buddhists’ man without rank and without title.”  (Fromm, Eric, The Art of Being, Constable – London (1997), Page 84)

The two most far-reaching, eye-opening critical theories at the beginning of the latest phase of industrial society were those of Marx and Freud.  Marx showed the moving powers and the conflicts in the social-historical process; Freud aimed at the critical uncovering of the inner conflicts.  Both worked for the liberation of man, even though Marx’s concept was more comprehensive and less time-bound than Freud’s. Both theories also share the fate that they soon lost their most important quality, that of critical and thus liberating thought, and were transformed by most of their “faithful” adherents into ideologies, and their authors into idols.  (Fromm, Eric, The Art of Being, Constable – London (1997), Page 40)

The transtherapeutic goal is that of man’s self-liberation by optimal self-awareness; of the attaining of well-being, independence; of the capacity to love; and of critical, dis-illusioned thinking, of being rather than having.  (Fromm, Eric, The Art of Being, Constable –London (1997), Page 64)

The Buddha, Moses, the Greek philosophers, the new science, the enlightenment philosophers, the great artists, the great physicists, biologists, chemists, Marx and Freud – they all have in common the passionate desire to break through the deceptive ‘Maya’ of the senses and of ‘common sense’ and to arrive at a perception of human and natural, of spiritual and material reality.  Their fields differed,  their methods differed, but no doubt their impulse and goal was the same. All that the human race has achieved, spiritually and materially, it owes to the destroyers of illusions and to the seekers of reality.  (Fromm, Eric, Beyond the Chains of Illusion, ABACUS (1983) Pages 151-151)