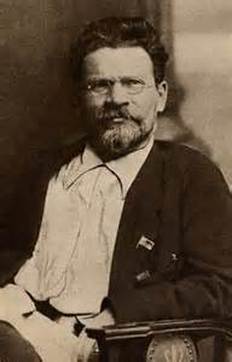 Many people are under the false impression that the development, the shaping of the human being consists in young people occupying themselves with their Komsomol duties.  But these Komsomol duties consist mainly of mastering the ABC of politics, studying Marxism, in a word, social problems.  It seems to me that such a narrow view of problems concerning the formation of Human beings is a wrong one.  I recall the way we developed as Marxists in days gone by.  We not only studied specifically Marxist books.  (By the way, there were far fewer of them in those days.  …At that time we only had the Erfurt Program and the Communist Manifesto.)  Well, then, I was referring to our studies in underground circles; while we studied the basic principles of Marxism we also covered a course of general education, beginning with the Russian classics – fiction writers, historians, critics – in a word, the whole range of knowledge to be found in books.  Thus we were working in a plant and at the same time acquiring an all-round education in literature, science, etc.

I once made the statement at the Lobachevsky Military Academy that to study Marxism does not mean to read through Marx, Engels, and Lenin; you may study their works from cover to cover, you may be able to repeat their ideas word for word, but that will not necessarily signify that you have really learned Marxism.  To learn Marxism means to know after mastering the Marxist method how to approach all other problems connected with your work.  If, let us say, the sphere of your future work is agriculture, will it be an advantage to be able to employ the Marxist method?  Of course it will.  But to employ the Marxist method, you have to be an agricultural expert. Otherwise nothing will come of your attempt to apply Marxism in agriculture.  This should not be forgotten if you wish to apply Marxism in practice, if you wish to be men of action, and not textmongers of Marxism. But what does being a Marxist mean? It means being able to adopt the correct line.  But to be able to adopt the correct, Marxist line, you also need to be a first-rate expert in your particular sphere of activity.

I have noticed that some of our young people adopt a flippant attitude to the skilled men who teach them.  I would very much like our young people to read the ancient philosophers.  There they would see with what attention and respect pupils regarded their teachers.  To learn to work well, you must put your heart into your work. Unless you do, you will never learn to work.  A fitter’s apprentice, let us say, ought to disregard all the negative points of his teacher, and learn from him all he can about his trade.  You know yourselves how funny an old man of 60 may look to young people in very many respects, but if you pay attention only to this, you will miss the main thing.  What you have to learn to do is to learn all about your trade from him.

To be a Marxist you must saturate theory with life, link up your daily work with theory to be a Marxist means to do creative work.  What do we mean by doing creative work?  What is the difference between one who does creative work and one who is a mere craftsman?  The same as between an artist and a plain dauber.  Take the ikons done by the painters of Vladimir and Surdal.  They are all alike; not a single ikon has a face with life in it…  A person who does creative work is another matter.  He puts his heart and soul into the simplest job he does, even if he happens to be making a pair of bast shoes. A craftsman can be an outstanding artist if he puts his heart and soul into the work he does. And an artist may be a craftsman if all he does is daub, without putting into his heart into his work.  Thus Marxism into which one does not put one’s heart, Marxism that is not bound up with creative work, that is not always alive to all that is going on, is quasi-Marxism.  …The Marxist method is correctly applied when we employ Marx’s theory to make a study of the phenomenon confronting us.  And the decisions we take will be a new one each time. If you settle a problem one way today, tomorrow you will settle the same problem in a new way, for the situation tomorrow will be different. The situation is continuously changing. History moves on, it does not mark time, but everlastingly moves forward. And the Marxist must constantly move forward, in step with historical progress.  The Marxist must always be able to find his exact bearings.  The mind of the Marxist, however simple the work he is doing, must always be in aerment, studying, creating.

If you are a real Communist, you will remain young to the end of your days.  Why did I say a real Communist?  A real Communist’s personal troubles occupy a subordinate place in his mind:  If something unpleasant happens in the family, it is painful, of course, but I do not think Socialism would suffer as a result, and hence the job on hand should not suffer either.  It goes without saying that if you are concerned solely with domestic affairs, if you always think only of yourself and your Fekla, you will not be a real Communist.  But when you really engage in active work, play an active part in all the constructive work that is going on, there will be times when you will not even notice what sort of dress she is wearing, and will forget the petty things in life and your private troubles.

(MI Kalinin: On Communist Education [1953] – Pages 39-40: Develop Yourself in Every Way; Speech at a Conference of Leading Members of the Young Communist League Organisation in Dniepropetrovsk, May 1934)

The Marxist-Leninist theory is not a symbol of faith, not a collection of dogmas, but a guide to action. When they talk about mastering Marxism-Leninism, some people say: “It is a profound piece of work,” “very profound,” etc.  It must be understood, however, that the main thing in Marxism-Leninism is not the letter, but the substance, the revolutionary spirit.

(MI Kalinin: On Communist Education [1953] – Pages 63-64: Speech at a Conference of Best Urban and Rural Schoolteachers Convened by the Editorial Board of the Newspaper Uchitelskaya Gazeta, December 28 1938)

How should study circles be regarded?  You see, there is a sort of flavour of narrowness about the circle.  The very name “circle” is a sign of narrowness. Does this rule out collective discussion? No, it does not, nor does it discredit the method.  Collective discussion should be combined with individual study, which is the main method.  Prepare at home, read a paper at a circle or public meeting, and follow it up with a general discussion.  What is wanted is not an artificial debate, but a discussion in which everybody expresses his real opinion on the question raised and is not afraid to say what he thinks… Therefore, if you want to understand Marxism-Leninism and to master this theory, lectures, papers and debates, based on independent study will be of enormous benefit to you.  Independent study is the main method of mastering Marxism-Leninism.

(MI Kalinin: On Communist Education [1953] – Pages 73-74 & 76: Speech at a Conference of Best Urban and Rural Schoolteachers Convened by the Editorial Board of the Newspaper Uchitelskaya Gazeta, December 28 1938)

Communist principles, taken in their elementary form, are the principles of highly educated, honest, advanced people; they are love for one’s Socialist motherland, friendship, comradeship, humanity, honesty, love Socialist labour and a great many other universally understood lofty qualities.  The nurturing, the cultivation of these attributes, of these lofty qualities, is the most important element of Communist education.