The Myth of Secular Buddhism in the West 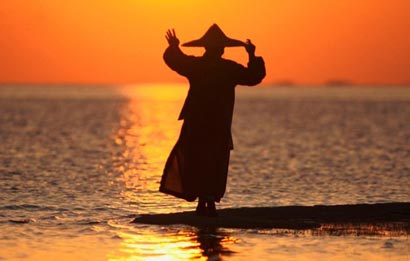 The philosophy of the Buddha is non-religious and not dependent upon a contrived theology for either it’s psychological or physical effectiveness.  Buddhism is a statement of rational logic that approaches life from the perspective of what already exists before (and behind) the senses.  For the Buddha, mind and matter are intrinsically linked at source, and are not separated by the false dichotomy of ‘mind’ verses ‘matter’, which evolved in its secular form in the West out of the Judeo-Christian theology that separates the world - a priori - into ‘good’ (i.e. ‘god’), and ‘evil’ (i.e. ‘humanity’).  This Christianised historical conditioning has no relevance to the development of Buddhism which emerged from the polytheism of Brahmanism hundreds of years before Christianity emerged from the unrelated system of Judaism.  Buddhism, as a form of philosophical realism, emerged from, and developed within the cultural milieu of ancient India, before spreading throughout Asia.  China imported Buddhism into its very different culture and retained the essential ‘Indian-ness’ of its teachings, although, of course, Buddhism was adjusted at its periphery to suit the everyday requirements of Chinese cultural existence.  A similar pattern of assimilation can be seen in the many different countries of Asia, but despite how Buddhism was integrated into those different cultures, the essential ‘Indian-ness’ of Buddhism was never lost, because within this cultural transference lies the entire essence and effectiveness of the Buddhist developmental paradigm.  This philosophical distinctiveness is not limited to Indian culture, nor is it defined by Indian culture, but it is a historical fact that the Buddha was born in ancient India and received a traditional Brahmanic education, and it is out of this distinct historical conditioning that rational Buddhism eventually developed.

The spread of Buddhism to the West has often been through a continuous and relentless misrepresentation. Probably the first Westerners to encounter Buddhism were European Christian priests as they went about their business building the foundations of Western imperialism in Asia.  The Catholic and Protestant churches propagated a vicious form of religiously inspired racism that denigrated the physical characteristics of the natives they encountered as being biologically inferior (thus distorting the teachings of Darwinto their own ecclesiastical ends), and the native’s religious beliefs as being inherently evil and the product of the devil’s work.  Other religions were treated with contempt and misrepresented in early books written in European languages.  This systemic misrepresentation was based solely upon a lack of genuine knowledge, and entirely upon a rampant, expansionist Eurocentricism premised entirely upon the Judeo-Christian tradition.  Many of these religious misrepresentations of rational Buddhism have survived into the 21st century as casual racism targeted at Asian cultures that preserve and follow Buddhist traditions.  Asian Buddhism, that is historically correct Buddhism, is viewed, along with its native adherents, as being culturally, philosophically, and ethnically inferior to the secular logic of the West that has developed out of the Judeo-Christian tradition.

This has led to what might be described as a ‘schizophrenic’ situation existing in the West toward the presence of Buddhism.  Many modern secular Westerners are drawn towards Buddhism due to its apparent pristine logic, whilst simultaneously ‘repulsed’ by the ‘Asian-ness’ of its associated culture.  This is a historical issue conditioned by the policies of the colonising Christian church and its demeaning theology – exactly the same theology that has given rise to the bourgeois state, and which sustains all its institutions and establishments.  This is why Marx stated that the criticism of religion is the key to the ruthless criticism of everything.  The Judeo-Christian West has evolved, to a lesser or greater extent, into a secular bourgeois logic that has locked within it the essence of privilege premised upon exploitation.  This bourgeois secular logic, as it is not the product of criticism and rejection of religion, retains within its structure and operation, distinct Judeo-Christian ideology thinly veiled as impartial ‘logic’ and ‘rationality’.  Of course, it is nothing of the kind.  Buddhism is perceived - through the Judeo-Christian filter – as being an inherently corrupt and racially inferior presence in the West.  As a consequence, it is either completely rejected, or conditionally accepted.  The rejection falls into the radicalisation (and complete rejection) of the perceived ‘other’, whilst conditioned acceptance leads to the rejection of the‘Asian-ness’ of Buddhism, whilst simultaneously engaging the rational logic of Buddhist philosophy.  With the rejection of ‘Asian-ness’, Buddhism is then perceived by the bourgeois as being both historically ‘neutral’ and culturally ‘free’ so that it can be reconstructed in the image of the bourgeois god of exploitation and profit making.  The Christian church rejects the notions of polytheism, rebirth, karma, and the idea that humans can save themselves without reliance upon a god, and these sentiments can be seen in so-called‘secular’ movements pertaining to represent Buddhism in the West.

The notion of secularism suggests a complete break with the historical conditioning of the past, and the embracing of an impartial and optimally functioning rational mind. However, bourgeois society does not reject its own Judeo-Christian basis and actually encourages its preservation and propagation. Although bourgeois scientists may employ a ‘scientific method’ that rejects the more obvious surface notions of theology, much of their logical work is coached in religious, or semi-religious terminology, with one or two such researchers claiming that a god has created science! This distorted logic is not just a matter of the cart being placed before the horse, but suggests that the horse made the cart with no sense of irony!  Secular Buddhism already exists in Asia and it can not be made ‘more’ secular through its importation into a Western cultural milieu that must demean and denigrate everything ‘new’ that it encounters. A so-called ‘secular’ Buddhism is often nothing more than a highly aggressive and racialised response to the presence of Asian Buddhism in the West.  Secular Buddhism is Buddhism stripped of its offending ‘foreignness’ in the bourgeois mind.  It is the pursuance of discrimination hidden behind the justifying mirage of the search for truth.  This type of distorted Buddhism becomes nothing more than a dry form of psychoanalysis that lacks the penetrative power of its Asian counter-part.  It is the embracing of gross or metaphysical materialism which both Marx and the Buddha rejected, and oddly represents a certain kind of idealism that rejects the premise of its own existence.  Secular Buddhism is a shadow of real Buddhism. Real Buddhism is the rejection of religiosity and all the secular and social institutions premised upon it. Like the philosophy of Marx it can not be improved upon, but only altered away from its original emancipatory function.  Secular Buddhism that is the product of bourgeois sensitivities is a product of the very illusion that the Buddha states defines the world.  Herein lays the inherent contradiction at the heart of racism disguised as the higher logic of secularism.

Buddhism, as a rejection of Brahmanism, can not be interpreted as ‘Asian’, anymore than Marxism, as a rejection of Judeo-Christianity, can be interpreted as ‘Western’.  Both systems of logic systemically reject, and are advanced beyond the historical conditioning of their respective epochs.  Viewing the Asian practitioners of Buddhism as ‘foreign’ is of course the epitome of a racist response to the unfamiliar, as such an attitude permanently excludes one set of human beings (the excluded) from a valid and equal interaction with another set of human beings (the excluders).  This means that as Buddhism is not ‘Eastern’ (despite its geographical origination and the skin colour and distinct cultures of its adherents), it can not be recreated as ‘Western’,which is just another term for ‘secular’. This contradiction has led to certain individuals in the West banding together to form ‘Western’ or ‘secular’ Buddhist groups that range from an over-aloof intellectual interpretation of Buddhism, to the absurd situation where Asian culture is rejected by certain groups, the members of which nevertheless walk around in Buddhist robes acquired from Asia, sporting shaved heads and calling themselves by Sanskrit names. This is the bourgeois at play and working class Buddhists should avoid the trap of cultural relativity and intellectual excess.  The ignorance of the present has its roots in the past and Buddhism should not be defined through the ignorance of Judeo-Christian theology.