The Morning Star and the Continuation of Anti-Buddhist Reporting 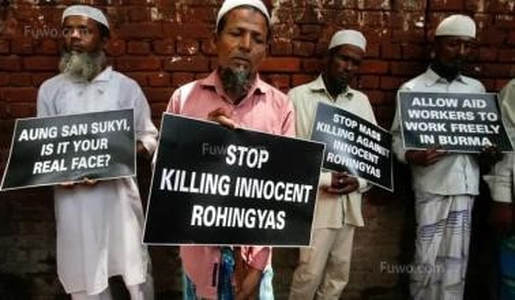 The BMA (UK) Supports the Rohingya People
Morning Star
Co-Ordinator’s Note: The BMA (UK) supports Marxist-Leninism and the Communist Party but does not support revisionism or Trotskyism. The Morning Star is the only daily newspaper in the UK that purports to support Socialism and agitates from a leftist position. Over the last five years or so, we have been observing the Morning Star which has continued to include highly negative and misleading stories involving Buddhism. This situation has arisen due to a lack of expert knowledge in this field within the Morning Star, and the newspaper’s lurch toward centrist politics and popularist press publications. The result is a simultaneous abandonment of the ‘revolutionary’ working class, and of non-White workers who may have a cultural or historical association with Buddhism. As the BMA (UK) is not interested in bourgeois popularity or gaining votes within liberal democracy, we stand firmly on the side of the workers and the ideology of Marxist-Leninism as part of our ‘Red Dharma’ initiative. We do not call for a boycott of the Morning Star, far from it, buy it, engage with it, read if for free online but above all think for yourselves and insist that the Morning Star is a) made aware of the nature of its deficient reporting, and b) pressured by its readership so that its current editorship abandons its bourgeois experiment and returns the paper safely back into the hands of the workers who actually own it.

Author’s Note: The BMA (UK) supports the Rohingya people of Myanmar (Burma) because they are a victim of historical (and contemporary) Western imperialism in the area. Indeed, parallels may be drawn between the treatment of Palestinians by the Israeli (Zionist) Authorities, and the brutal treatment of the Rohingya ethnic group living within the geographical borders of Myanmar, at the hands of the Myanmar State. Any Buddhists who have participated in this genocide within Myanmar, (or who support the Western project of Islamophobia anywhere in the world), are wrong, and contradicting the Buddha’s advice to uproot greed, hatred and delusion from the mind (as thoughts), and through the body (as actions). Western capitalism, fascism and violence are premised upon the propagation and strengthening of greed, hatred and delusion in the mind (through habitual thought patterns) and the body (through destructive behaviour patterns). Attacking anyone for any reason contradicts the Buddha’s Teachings (Dharma) and breaks the moral code of the Vinaya Discipline (followed by the ordained Sangha and devout laity). On the other hand, using the mind wisely (panna) allows for correct understanding to be established in the world premised upon compassion and wisdom. The Morning Star newspaper does much good for the Socialist cause within broader society, and certainly remains one of the few newspapers that is in anyway remotely ‘Communist’ at least in intent if not in practice. This observation does not absolve it from constructive criticism, however, and Communists are advised to make the Morning Star a better manifestation of Marxist-Leninist reporting through positive interaction, authoritative critique and knowledgeable questioning. The Morning Star has to be dialectically convinced that Buddhist philosophy is Revolutionary in nature, and that Buddhism is not a theistic religion but part of the Marxist-Leninist antidote to the ‘opiate of the masses’.
ACW (29.8.2018)

The BMA (UK) rejects all ethnic and religious violence, reminding Comrades that this is simply the product of bourgeois manipulation in the service of predatory capitalism. The Rohingya Crisis in Myanmar is not (as the Morning Star likes to continually assert) a conflict between Buddhists and Muslims, fuelled by the insanity of Buddhist philosophy. The Morning Star is not a Marxist-Leninist, but a bourgeois leftist publication today (admittedly with its historical roots within genuine Communist ideology). In many ways, the Morning Star has moved to the right and now occupies the ground that the Guardian used to dominate before it became thoroughly centre-left. The Morning Star is now left of centre, and nolonger far-left. This shift has occurred in an attempt to boost sales and establish a newspaper with Socialist (not ‘Communist’) aspirations within the mind of the general public. The very fact that it eulogises the barbarity of professional boxing demonstrates just how far this once powerful working-class publication has strayed from not just Marxist-Leninism, but also Marxist-Engels thinking. In this regard, the Morning Star exhibits a definite revisionism and Trotskyite sentimentalism. Even if it is acknowledged that this is an expedient in an ever changing and unpredictable world, this observation must also be used to weigh the damage such establishment-supporting rhetoric inflicts upon the working-class and the Revolutionary movement over-all.

The BMA (UK) has on occasion been asked to verify some of the anti-Buddhist stories appearing in the Morning Star in the language of the countries involved. Invariably, whilst accessing Thai, Burmese or Singhalese language media (as the Morning Star tends to target the Theravada Buddhism of Southeast Asia), it has been discovered that the stories are misrepresentative and not conveying the actual facts. When contacting the Morning Star with this concern, we (and others) are ignored. The problem is that the Morning Star is propagating ‘fake news’ by participating in the spread of the Eurocentric falsification of Asian Buddhism and Asian Culture and Asian people, and thereby assisting in the maintenance of racist attitudes in the West against non-White people (and their culture). The style of reporting that the Morning Star uses is reminiscent of the racist ‘Sun’ newspaper in the UK, and is designed to confirm in the mind of the average reader that Buddhism and Buddhists are inferior, and that this is quite simply the correct and natural position to hold. There is no dialectical understanding in any of this type of anti-Buddhist reporting, or in the misrepresentation of Buddhist-involved news stories.

When conveying Buddhist-related news, the Morning Star does not access or liaise with any ethnic news agency, but instead invents a false narrative generated out of the prejudices that inform the Western imagination. Although targeting the Buddhism of Southeast Asia (which ironically has expressed much support for Communist Revolution as a means to relieve poverty), the Morning Star seldom mentions or condemns the pseudo-Buddhism of the Dalai Lama or the corrupt and criminal nature of the Pro-Tibetan Movement. Of course, the Morning Star also fails to make any mention of the Buddhism operating within Communist China, because if it did, it would have to admit that since the early 1950’s (and the influence of the Great Master Xu Yun 1840-1959), Chinese Buddhism has been wedded to the Communist State by positively assisting in the building of Socialism within China. In many ways the Morning Star – whilst claiming to be ‘Revolutionary’ – is acting like any other bourgeois-inspired media publication and propagating a reactionary and counter-revolutionary attitude amongst its readers. The Morning Star criticises Buddhism but has no real understanding of a) Buddhist philosophy, b) Buddhist culture, or c) Buddhist political thought. Joseph Stalin is seldom mentioned either nowadays in the Morning Star, perhaps it is because Stalin was aware of the high regard within which Marx and Engels held Buddhist thought, that Karl Marx did understand Buddhist philosophy (due to the influence of his friend and great Buddhist scholar Karl Koppen), and that half seriously and half in jest, Karl Marx even admitted to trying meditation. Of course, Joseph Stalin also founded the Soviet Institute for the Study of Buddhist culture in 1928 (designed to enhance Soviet academic understanding of Buddhism).

Finally, the more level-headed Marxist-Leninist reporting understands that the ethnic violence in Myanmar is not between Buddhist and Muslims (as the Morning Star continuously asserts), but is actually a conflict between the military and security forces as directed by the Myanmar State against the Rohingya people (considered to be of Bangladeshi ethnicity), with the Rohingya people being viewed as ‘foreigners’ and subjected to State sponsored violence, murder, torture, rape and ethnic cleansing. There is no conflict between Buddhists and Muslims in Myanmar, and there cannot be any conflict between Buddhism and Islam (in Myanmar or anywhere else). Historical, material forces are at work that contain the traits of Eurocentric racism throughout Asia, bequeathed to that region by hundreds of years of Western imperial presence (there is no mention of this basic Marxist-Leninist assessment within the Morning Star). The present Myanmar State is behaving exactly the same as the previous European colonial powers by dividing and conquering. The Morning Star is behaving just like these colonial powers when its deficient reporting does not mention this fact. Many Buddhist institutions (and individuals) oppose any and all violence against the Rohingya people in Myanmar, but the Western press is too busy demonising the Burmese to mention this inconvenient fact. Yes, there are individuals who happen to be Buddhist who are heeding the call of the Myanmar State to attack the Rohingyas, but this is a manifestation of transplanted Western fascism, and not the product of any aspect of the peace-preferring philosophy of Buddhism. It is true that within Thailand and Sri Lanka there are a minority of what must be described as ‘corrupt’ Buddhist monks who use their authority to follow Western-generated Islamophobic narratives in their speech and actions, but such ignorance is not representative of Buddhist thought, but entirely the fabrication of Western imperialism, racism and fascism. The BMA (UK) continues its call for the Morning Star to abandon its bourgeois-supporting and revisionist position both in general and in regard to its misrepresentation of Asian Buddhism and return to a more recognisable Marxist-Leninist line of dialectical reasoning and analysis.