How Marxists Should Meditate 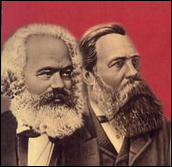 The practice of meditation, for the Marxist, is the performing of a social action that is revolutionary in nature.  It is not a regression into a quagmire of theologically inspired religiosity, or other imagined phantasms.  The objective of meditation (for the Marxist) is nothing less than the breaking of the conditioned stream of false consciousness (inputted through experience into the human mind from birth), which is the product of the historically produced socio-economic environment.  This environment is bourgeois in essence.  It is the heavy weighing oppression of the middle class and its highly exploitative mode of communication with the working class, which serves as the fabric of the socio-economic structure.  The socio-economic structure permeates every aspect of physical existence, benefitting the few and damaging the many, and creates in the human mind, a mirroring psychology that internalises every excess of the bourgeois outer world.  The working class as a collection of individuals, are conditioned against their will by the force of historical materialism, to behave in an innately disempowered manner toward themselves (i.e. self-hatred), and in a dysfunctional and aggressive manner toward everyone else.  An underlying aspect of this debilitating default psychology is a weakening of the true resolve to resist oppressive authority in the outer world, and instead compete pointlessly with other working class people occupying exactly the same position of false consciousness.  This serves the bourgeois system well as it takes away at source, the mental strength and will-power to realise a true understanding of reality as it actually is. In desperation, the working class blame one another, immigrants, minorities, and other ‘imagined’ enemies, but never turn their attention toward the bourgeois itself.  Many, not wanting to give vent to bourgeois conditioned aggression, turn toward religion and take solace in the belief in miracles, and wait patiently for some sort of ‘messiah’to suddenly manifest and magically change the injustices of the outer world.  Others, following exactly the same path of religiosity, give an amplified expression of bourgeois hatred, justified as the will of an imagined ‘god’.

God, in this context, is nothing more than a romanticised image of the oppressive bourgeois state. The socio-economic power that oppresses the masses every moment of their lives, although very real at the point of contact, like a heavy weight upon the shoulders of every man, woman, and child, also appears ‘distant’ in essence.  This is why the ‘god’ concept as imagined in the Judeo-Christian tradition, suffers from the illogical paradox of being on the one hand ‘good’, whilst on the other hand ‘evil’.  This is, of course, exactly how the bourgeois state behaves; it rewards conformity to its unjust structure, and severally punished, either directly or indirectly, any attempt to reveal its true nature, or over-throw its unquestioned rule. Religion is not the answer to socio-economic oppression, it is its essence manifest, and a Marxist should quite rightly avoid and ignore such constructs as both backward and counter-productive.  Religiosity is the bourgeois state active on earth, imagined as existing in the sky as a mythological heaven, by those who suffer from its tyranny.  Buddhism that is distorted into religiosity by social conditions, is exactly this model manifest through loosely interpreted ‘Buddhist’ culture by those Westerners unfamiliar with Asian and Chinese culture, or by Asian and Chinese people influenced by Western, bourgeois imperialist tendencies.  Buddhism that is mired in religiosity is not ‘Buddhism’ as taught by the Buddha. Religiosity is exactly what the Buddha rebelled against and thoroughly revolutionised in ancient India.  He referred to Brahmanic belief in ‘deterministic karma’ and in ‘polytheistic gods’ as the product of the unenlightened mind.  He taught that the racist caste system was based upon a theocratic lie, and that the religion of his day was thoroughly corrupt.  The core teaching of the Buddha is a very careful description of the working of the human mind within the environment, and the environment working within the mind.  The mind that perceives, and the world that is perceived, are not viewed as two separate and unconnected realities within Buddhist analysis.  Mind and matter, instead, are presented as two distinct aspects of a single continuum; a view that is very much in accordance with the analysis of Marx.  Buddhist sutras must be analysed from a clear Marxist perspective.  Religious content may be viewed as a latter edition to the ancient texts (added by reactionary individuals who did not understand the Buddha’s trans-religious message), and discarded as being of no developmental use. In this way the original teachings of the Buddha can be revealed.  These teachings are highly critical of a society that discriminates against its own stratified citizenship, and which inputs greed, hatred, and delusion into the minds of its individual.  Just as the modern bourgeois state behaves as if it is the only logical and possible means of existence, the Brahmanic caste system has implicit in its racism and economic oppression, the lie that a ‘god’has created it as an unquestionable ‘divine’ manifestation.  This inverted logic asserts that oppression is correct, and that to suffer is divine. The bourgeois distortion of reality, therefore, benefits the powerful minority by assuming that it is ‘illogical’ to question or confront their oppressive rule, when in fact such a course of action is actually highly logical, and to be expected.

The Marxist must ask a very important question – what did the Buddha actually do?  What was the premise of his understanding?  Buddhism in the modern West is so distorted into a pseudo Judeo-Christian format by its converts, that until otherwise proven as legitimate, he should be treated as ‘religion’ and ignored.  Once this is understood, Marxists who make use of the practice of meditation, can realistically separate Buddhism into two categories:

1) Religious, distorted, capitalist, reactionary and counter-revolutionary - in the service of the middle class and all bourgeois tendencies (including Christianity).
2) Progressive, revolutionary, communistic, counter-religious, developmental, educational – and in the surface of the working class.

It is clear that the Buddha charged nothing for his 45 years of teaching – no money changed hands of any sort, for any reason.  Westernised, bourgeois Buddhism routinely charges large amounts of money for meditation courses that amount to nothing more than concentrating on the breath as it enters and leaves the body.  The teachers of these courses mimic the oppressive behaviour of the medieval Christian church, and confirm this dominance of the masses by lording it over a meditation class.  This is the stale psychology of religiosity that must be uprooted from a civilised society. Just as a Communist Revolution must be achieved through class action that is disciplined throughout its membership, the Marxist who meditates, must ‘order’ his or her mind and body, and apply an appropriate meditation technique.  The point of this exercise is to:

The practice of meditation, although it may appear to be an isolatory act, is in reality an act of very important social significance.  It is learning to cope with, and then transcend, the limitations of conditioned psychological programming.  This may be successfully integrated into other forms of social action, and the study of Marxist literature.  The Buddha’s method is a system of freeing the mind of its own self-limiting, and self-defeating conditionality, and preparing it for an optimum, non-religious functionality.  The Buddha says nothing beyond this objective.  A working class person who is naturally disadvantaged by the bourgeois system, and who lacks discipline, education, and understanding, can begin the self-disciplining process by practicing Buddhist meditation, clear his or her mind, and use this discipline to become part of a progressive working class activism in society.  Meditation is the use of directed will-power, nothing more.  Buddhist meditation, at its purest is non-religious and does not accept the validity of religious experience as a means to over-come tyranny. Generally speaking, the science of meditation is an advanced form of self-psychoanalysis that focuses upon the broader picture of class conditioning, rather than personal experiences, but which reconciles the‘personal’ with the ‘collective’ by uprooting the essence of exploitation in the mind, as it serves as the filter through which all experience is perceived, and through which all behaviour conditioned, motivated, and manifest.  Nothing in human nature is free of the disastrous affects of bourgeois conditioning.

For the oppressed masses excluded from education, affluence and opportunity within a ruthless capitalist society, meditation can serve as a means of self-strengthening that is not reliant upon money or privilege.  For this to happen good meditation teachers must be able to instruct effectively and expect no payment, acting in accordance with the ancient Asian and Chinese concept of providing Buddhist teachings for free, because it is the correct attitude to adopt.  Free teaching should not be second rate, or below par simply because it is not motivated by greed and profit, but should rather be of the highest calibre.  A meditation teacher is in reality a psychologist and a psychoanalyst who has the ability to expertly guide the student through the use of a meditative method.  As is always the case, the Marxist who sees value in pursuing a meditative path, must not allow religiosity to enter into the mind.  In this way the mind and environment can be permanently transformed to facilitate the development of Socialism and Communism.