How Early Buddhism Transitioned into Mahayana 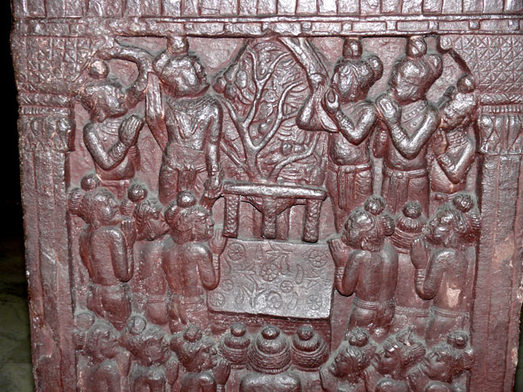 The Buddha Depicted by His Absence
Karl Marx (and Friedrich Engels) knew about two distinct aspects of Buddhism (primarily through Karl Koppen) – namely Early Buddhism (associated today with the Theravada School and the Pali Canon), and Tibetan Buddhism (today associated with an extension of the Mahayana tradition known as the ‘Vajrayana’). Marx may also have had contact with a Buddhism of sorts, through his study of the great philosophical work of Hegel (although Hegel misinterpreted various Buddhist concepts due to the general lack of genuine knowledge about Buddhism in the West at the time). Engels – in his ‘Dialectics of Nature’- states that the Buddhist use of dialectics was on a par with the best that Greek philosophy had to offer, and Marx makes numerous comments about Buddhism in his ‘The German Ideology’ (elsewhere he refers to Buddhism as ‘Brahmanic rationalism’). This augments the many parallels that can be observed between Early Buddhist philosophy and Marxist Historical (and dialectical) materialism. The Buddha rejects theistic religion, caste, and any behaviour that is the product of greed, hatred and delusion, or which generates greed, hatred and delusion in others. The Buddha also rejects ‘individualism’ and advocates as the final ’nirvana’ (i.e. the extinction of suffering inducing desire) as the realisation of an impersonal collectivity. Of all the world philosophies (as Buddhism is not strictly speaking a ‘religion’), it is the pristine philosophy of Early Buddhism that interfaces with Scientific Socialism in a most conducive manner. We even have Marx stating in a letter that he once practised Buddhist meditation as a means to relax his mind whilst on holiday at the seaside (and healing from one of his bouts of illness). Was Marx influenced in any way by Buddhist philosophy during his long educational journey toward his masterpiece ‘Das Kapital’ (first published in 1867), and the formalisation of his theory of Scientific Socialism? It is an intriguing possibility, particularly as the core observation of both Marx and Buddha is that the average human mind is socially, economically, culturally, politically and religiously conditioned to operate in an ‘inverted’ manner, and that as a consequence, the answer to this problem of ‘false consciousness’ is to engage in a special type of physical and psychological re-education that ‘undoes’ all the previous misdirections, and in the process, firmly establishes a ‘non-inverted’ mind. Whereas Buddha referred to this transition as ‘enlightenment’, Marx defined as the ‘true consciousness’ required to build Socialism. Just as the Buddha ‘disappeared’ into the impersonal collectivity of ‘nirvana’ – Marx stated Socialism (once established) would eventually transition into Communism- an undefined and entirely ‘new’ collective reality within which the State disappeared, and with it all vestiges of class, bourgeois notions of individuality and any form of discrimination. The point is that Buddhist philosophy in its purest form, remains a priori ‘anti-capitalist’ due to its firm rejection of ‘greed’ as a legitimate agency to secure happiness in life, and as such, is naturally supportive of the tenants and objectives of Scientific Socialism (in all it humanitarian aspects). Certainly, within Communist China and Socialist Laos, the Buddhist Establishment (both monastic and lay) actively support the State in its building of Socialism, as is the case in Socialist Vietnam. This might also explain that whilst breaking the political power of the Judeo-Christian Church in Russia (and the USSR), the Bolsheviks acknowledged at least three Buddhist ‘Socialist’ Republics within its borders, as well as academically acknowledged the importance of studying Buddhist philosophy and culture (with the Soviet Buddhologist FI Stcherbatsky establishing the ‘Institute for the Study of Buddhist Culture’ [under JV Stalin] in 1928).

What follows is a short extract from FI Stcherbatsky’s excellent book entitled ‘The Conceptions of Buddhist Nirvana – With Sanskrit Text of Madhyamaka-Karika’ (Motilal, 2003, Pages 41-42), which clearly and concisely explains how Early (atheistic) Buddhism transitioned into a latter Buddhism that appears to extol the Buddha as being a ‘god-like’ figure. I would add that in the actual practice of Mahayana Buddhism, all the teachings of Early Buddhism still stand, with the caveat that through the development of compassion, non-Buddhist ideas and attitudes are ‘tolerated’ and even ‘integrated’ into Buddhist practice, whilst being ultimately ‘rejected’ as being within the world of delusion. One Mahayana development that appears to retain the pristine nature of Early Buddhist thought is that of the Chinese Ch’an School, with its reliance upon studying the Buddhist teachings whilst remaining ‘non-attached’, practising seated meditation whilst remaining ‘non-attached’, and realising enlightenment ‘here and now’ (beyond any method used to achieve its realisation). I would also advise caution in referring to Buddhism as a ‘religion’ – despite the fact that certain ‘religious’ elements have accrued around its atheistic philosophical core – as the two aspects are separate and distinct:
​Part II Section XI – The Madhyamikas

This system of philosophy and dialectics is the foundation of the Mahayana religion. Although other systems – the realism of the Sarvastivadins and the idealism of the Yogacaras – are also studied in the monastic schools of the countries where this religion flourishes, nevertheless the Madhyamika system is generally regarded as the true background of the religious feelings of it votaries. For it must be allowed that the Mahayana is truly a new religion, so radically different from Early Buddhism that it exhibits as many points of contact with later Brahmanical religions as with its own predecessor. Prof. O. Rosenberg calls it a separate “church” and compares its position with Roman Catholicism versus Protestantism. The difference is even more radical, since the new religion was obliged to produce a new canon of Scriptures.

It never has been fully realised what a radical revolution had transformed the Buddhist church when the new spirit which however was for a long time lurking in it arrived at full conclusion in the first centuries A.C. When we see an atheistic, soul-denying philosophic teaching of a path to personal Final Deliverance, consisting in an absolute extinction of life, and a simple worship of the memory of its human founder, - when we see it superseded by a magnificent High Church with a Supreme God, surrounded by a numerous pantheon and a host of Saints, a religion highly devotional, highly ceremonious and clerical, with an ideal of Universal Salvation of all living creatures, a Salvation by the divine grace of Buddhas and the Bodhisattvas, a Salvation not in annihilation, but in eternal life, - we are fully justified in maintaining that the history of religions has scarcely witnessed such a break between new and old within the pale of what nevertheless continues to claim common descent from the same religious founder.
​Although Mahayana Sutras may have ‘religious’ or ‘mythological’ content contained within them, when this extra material is stripped away, the core atheistic teachings of Early Buddhism is always present in one form or another. What FI Stcherbatsky is observing is the ‘expansion’ of the Buddhist agenda to include more of humanity – presumably as a reaction to the historical spread of Buddhism out of North India, and the encountering of different socio-economic and religious conditions – although the language he sometimes uses is peculiarly ‘Eurocentric’ and ‘Judeo-Christian’ in nature. Buddhism (of any tradition or lineage), has never been a ‘church’ in Asia (despite some odd movements that have developed around an usurped Buddhist philosophy in the West). Furthermore, ‘Bodhisattvas’ are not ‘saints’, and Mahayana enlightenment – far from being a theistic notion of ‘eternal life’ – is in fact the product of a profound realisation of ‘emptiness’ (that includes all things). Whereas FI Scherbatsky draws a distinct dichotomy between Early and Latter Buddhism – and then attempts to fill in the gap with a profound assessment of historical fact and philosophical understanding – nevertheless, apart from the obvious devotional cults found within Mahayana Buddhism, the fact remains that there is nothing within the Mahayana (Sanskrit) Sutras that is not found in the Pali Suttas of the Early Buddhism – despite differences of philosophical interpretation. This analysis would suggest that the Mahayana Buddhism of Mainland China can assist the Building of Socialism just as effectively as the Theravada School in Laos supports that Communist State. However, the over-simplification of certain elements of FI Stcherbatsky analysis aside, his understanding of Buddhist history and philosophy remains unusually erudite and useful from a Marxist perspective. Finally, even if certain Mahayana Buddhist texts depict the Buddha as ‘super-human’, or various Bodhisattvas as ‘god-like’ in their behaviour, the fact remains that the central Buddhist teaching remains the atheistic and materialist Four Noble Truths – which contain the Buddha’s explanation of existence through the Five Aggregates. What the work of FI Stcherbatsky reminds us of is that the ‘original’ Buddhism is atheistic and materialistic – and in this regard - it compares favourably with the work of Karl Marx.