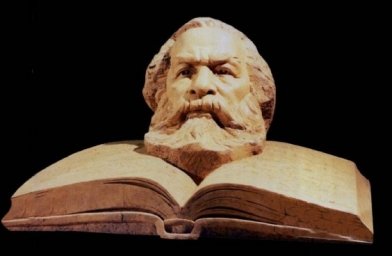 Karl Marx: The German Ideology Prometheus Books, (1998), Page 161
Karl Marx (1818-1883) was not a Buddhist in any conventional sense, and as far as can be ascertained, never personally encountered any form of ‘ethnic’ Buddhism on his travels around Europe.  His connection with Buddhist philosophy, however, stemmed from his life-long friendship and association with Karl Koppen – one of the recognised and early European academic experts upon the subjects of Early Buddhism and Tibetan Buddhism.  As Marx had met Koppen at university, it is logical to assume that this is where he (Marx) first encountered a Western academic interpretation of that Asian philosophy and religion.  Certainly, Marx mentions Buddhism in his The German Ideology (completed in early 1946), and again in his 1857 article for the New York Tribune, entitled ‘Sepoy Revolt in India’.[1]  In 1861, whilst visiting Berlin in the hope of retrieving his Prussian Citizenship (previously withdrawn because of his ‘revolutionary’ activity), Marx met with Karl Koppen, and after a drinking session, Koppen presented Marx with his two-volume study of Buddhism.[2] After this, in 1866, Marx wrote a letter to one Antoinette Philips (the centre-piece of this article), stating that he had been exercising his mind along Buddhist lines.[3]  In a work attributed to Friedrich Engels, entitled ‘Dialectics of Nature’, the Buddhist use of ‘dialectics’ is described as being at a ‘comparatively high stage of development’ (and is compared favourably with that of the ancient and classical Greeks).[4]  Although not published until 1934, it is believed that the bulk of this book was written between 1872 and 1882 – when Karl Marx was still alive. Given that Engels and Marx agreed on virtually everything, it is logical to assume that Engels’ positive appraisal of the Buddhist use of dialectics met with the general approval of Karl Marx himself, although it is clear that dialectics only reached their most advanced state of usage in the modern era of philosophical analysis (or the time within which Engels was writing).  The above extracts are a snapshot of the mentioning of Buddhism throughout the life-work of Karl Marx, and may not represent a definitive list, as research is currently ongoing into this subject.  What is demonstrated is that Karl Marx:

a) Knew about Buddhism.
b) Understood the basic non-theistic teachings of Buddhism.
c) Had reference to good quality Western academia about Buddhist philosophy.
d) Appreciated the developmental ‘psychological’ nature of Buddhist mind-training.
e) Marx understood that early Buddhism was not a form of idealism.
d) Apparently did not include non-theistic Buddhism in his critique of the theistic Judeo-Christian religion.

Of course, this does not mean that Karl Marx would have advocated the Buddhist path as an efficient (or even a relevant) path to free the Western proletariat, mired as it is in the Judeo-Christian tradition, but for the Eastern proletariat, the apparent intersection between the ‘mind-body’ (nama-rupa) of early Buddhist thinking (preserved predominantly in the Pali Suttas of the Theravada School), and the historical and dialectical materialism of Marx and Engels, (coupled with the fact that Marx fully acknowledged that ‘thinking’ and ‘education’ were integral aspects of the revolutionary path),[5] offers an interesting opportunity for the working class not born in the West, to easily transition from Buddhist philosophy, and into an appreciation of Marxist-Engelism.  It could be further argued that the Buddha’s emphasis upon the use of dialectical analysis to understand reality as an inter-play of ‘form’ and ‘void’, lays the cognitive foundation for Buddhists to be Marxists in potential, and that the transition from personal enlightenment of the individual (Buddhist), to the collective freeing of the working class (Marxist), is theoretically much easier for the Buddhist (as he or she possesses no theistic beliefs to give-up), than it is for followers of the theistic religions that comprise the Judeo-Christian traditions.  In his letter to Antoinette Philips, Karl Marx has this to say about the Buddhist meditative technique:

‘As it is, ‘I care for nobody, and nobody cares for me’. But the air is wonderfully pure and reinvigorating, and you have here at the same time sea air and mountain air. I have become myself a sort of walking stick, running up and down the whole day, and keeping my mind in that state of nothingness which Buddhism considers the climax of human bliss. Of course, you have not forgotten the pretty little diction: ‘When the devil was sick, the devil a monk would be; when the devil was well, the devil a monk was he.'’

This seems that Karl Marx understood something about the Buddhist meditative technique, and even the idea that meditation within Buddhism can be performed standing, walking, lying down and sitting.  Marx appears to going about his day at the seaside, exercising a self-discipline that involved the maintaining of the ‘non-arising’ of thoughts in his mind.  As well as the physical rest away from the city and his incessant intellectual activity, this letter seems to suggest that as part of his exercise and rest regimen, controlling the intensity of the function of his intellect was a key component.  How did Marx know how to apply the Buddha’s technique, given that he never met with practising Buddhists, or received any sort of instruction from a Buddhist teacher?  Karl Koppen, of course, made available in German translation, the central teachings of Buddhism (which probably involved extracts of the Buddha’s pristine ‘logic’), which was made available to Marx in 1861.  Five years later, Marx informs Antoinette Philips that he has been ‘keeping his mind in a state of nothingness’, in accordance with the Buddhist teachings.  Within the early Buddhist tradition, this would have involved concentrating the mind upon the inward, outward, and transitional modes of the breath, as well as keeping a dispassionate eye upon the thoughts and feelings that pass through the mind and body.  This dispassionate practice is the Buddhist technique of developing non-attachment, or non-identification with one’s thoughts.  If this method is properly practised, the discursive mind is brought into a state of ‘stillness’ and all movement in the mind ceases.  However, even within this state, the mind is not ‘dead’, and is continuously maintaining an enhanced awareness of both inner and outer phenomena, until such a time as the mind appears to ‘expand’ and integrate with the environment (or everything that can be sensed in the external world).  Although some of those who reach this state do experience a sense of ‘bliss’ (as Marx suggests), this is only temporary and not the objective of the Buddha’s method (which is premised upon the personal realisation and appreciation of the changeable nature of matter).  The Buddha certainly did not believe in any form of idealism, and even advocated an early form of evolutionary theory, which can be read in the Agganna Sutta.[6]  Lastly, there is a subtle difference within Buddhist philosophy between the terms ‘nothingness’ (Pali: ‘akincanna’) and ‘emptiness’ (Pali: ‘sunnata’).  Whereas ‘akincanna’ denotes an absence of things, the state of ‘sunnatta’ (or ‘emptiness’) is used to describe the true state of reality, or the personal realisation that the material universe (and the conscious mind) are not only linked in essence, but are also free of any sense or cultural-religious construct of ‘permanency’ (such as an eternal soul or indestructible self). The Buddhist achieves this non-theistic (or ‘atheistic’) realisation by stripping the mind (through an act of meditative ‘will’), of all vestiges of greed, hatred and delusion.  A human-being stripped of all greed, hatred and delusion in mind and body, is, of course, by definition, a ‘Communistic’ person.  Exposure to Marxist-Engelism, and Marxist-Leninism can then transition such an individual into a modern Scientific Socialist.

[5] Marx, Karl, The German Ideology Prometheus Books, (1998), Theses on Feuerbach No. III, Pages 569-574 – ‘The materialist doctrine concerning the changing of circumstances and upbringing forgets that circumstances are changed by men and that it is essential to educate the educator himself. This doctrine must, therefore, divide society into two parts, one of which is superior to society.  The coincidence of the changing of circumstances and of human activity or self-changing can be conceived and rationally understood only as revolutionary practice.’