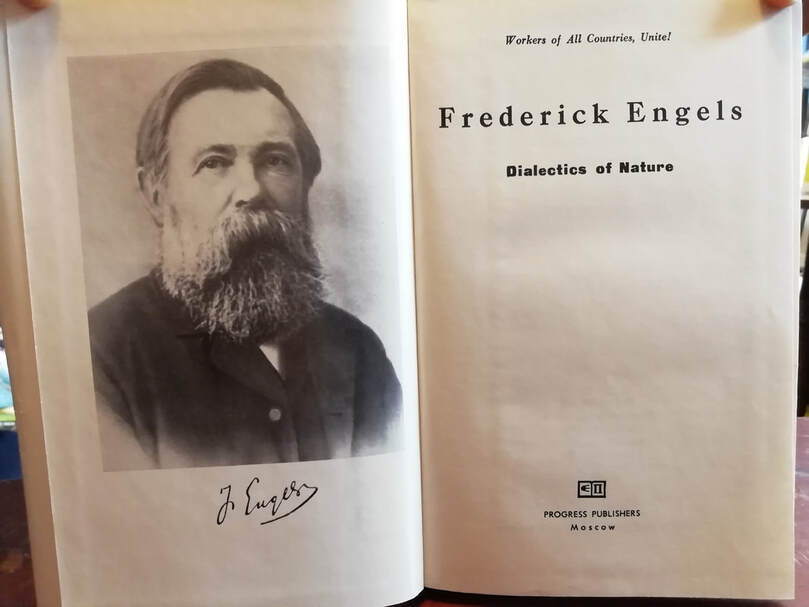 In a letter to Karl Marx in 1873, Friedrich Engels outlined his idea for a book entitled ‘Dialectics of Nature’. Marx showed this letter to K Schorlemmer (a prominent chemist), who agreed with the idea. To this end, Engels carried-out a vast amount of study (from 1873-1886) on the subject of natural science, writing 10 articles and chapters, as well as over 170 notes and incomplete fragments. Dialectics of Nature (written in Engels’ native German) can be divided into two periods of construction. The first coincided with his working on Anti-Duhring (May 1873-May 1876), and the second period coincided with his completion of Anti-Duhring to the death of Marx (July 1878-March 1883). After this Engels became the leader of the international working class and found it virtually impossible to continue his careful and systematic scientific study. What time he did have was dedicated to editing the next three volumes of Marx’s Das Kapital that had not yet been published. This was a huge amount of work which diverted his attention away from the ‘Dialectics of Nature’, which nevertheless, still possessed an ample and diverse amount of finished research. Engels predicted the discovery of sub-atomic particles and the infinite complexity of the atom. He defined physical existence thus: ‘Life is the mode of existence of protein bodies.’  Engels also clarified the labour theory of the origin of humanity in his essay entitled ‘The Part Played by Labour in the Transition from Ape to Man’. Indeed, there is much of great scientific value to be studied in this book, but he also made a study of various unscientific subjects such as vulgar materialism, metaphysics, idealism, agnosticism, one-sided empiricism and mechanicism, spiritualism and other manifestations of religious ideology. Scanned below is the chapter entitled ‘Natural Science in the Spirit World’ (Page 50-61) contained in the 1974 (6th) edition issued by Progress Publications (Moscow), of the USSR. Dialectics of Nature was never published during Engels’ lifetime, with the manuscript transported to the archives of the German Social-Democratic Party upon the death of Engels (in 1896), where it was kept for thirty years. Only two parts were published in the late 1890s – ‘The Part Played by Labour in the Transition from Ape to Man’ (1896) published in Die Neue Zeit – and ‘Natural Science in the Spirit World’ (1898) published in the year-book Illustrierter Neue Welt-Kalender. Dialectics of Nature was first published in its entirety in 1925 in the Soviet Union – with the original German text appearing alongside its Russian translation. This 1974 (6th) English language edition is based upon the 1941 Russian language edition.

Spiritualism appears to have emerged out of New York (USA) in the 1840s, and to have spread throughout rest of the US, Canada and the United Kingdom. It is generally believed to be an expression of what is termed by religionists as the ‘Second Great Awakening’ (1790-1840) - a renewal of the Protestant faith – and had been popular only in the English-speaking world, or more appropriately, former British colonies in the Americas. During WWI (1914-1918) and after, the practice of ‘Spiritualism’ became very popular in the UK, with many thousands of people asking ‘mediums’ to communicate with their dead relatives (who had perished in the trenches). By the time Fredrich Engels’ attention had been drawn to it (1878), ‘Spiritualism’ (which although possessing voluntary governing principles, does not have any set rules or dogma), had come under increasing demonisation in the press for a number of high-profile exposures of charlatans and fraudsters. From the Marxist-Leninist position, religion is an entirely ‘private affair’, and individuals living within a Socialist Society have the Constitutional right to follow any religious teaching of their choice – or not to follow any religion – with both choices being ‘protected’ and deemed ‘equal’ under the law. What concerns Friedrich Engels is whether the human mind is being used in a correct and dialectical manner (I.e. a non-inverted manner), throughout all aspects of the study of natural science, philosophy and mathematics, etc. For fairness, it must also be explained that many ‘Spiritualists’ - who thought they could hear, see, touch or even manifest an entirely different spiritual realm – did not charge money for their services and were quite often motivated by compassion for their fellow man, even if their methods (and thinking) were not exactly in-line with the modern scientific method. Of course, frauds (just like the capitalist system that has produced them) have persisted to this day in the Western world, but it is also true that many still quietly practice spiritualism today, retaining a hope that their beliefs will one day triumph over what they consider to be ‘material’ science.

How did Marx define ‘inverted’ thinking? Inverted thinking is defined as any thoughts, ideas, notions or opinions formulated within the human mind, which are mistakenly considered to exist in the material (objective) world. In other words, ideas in the head are mistaken for concrete objects and observable processes in the material world. The reason Marx considered this ‘inverted’ is because such an arrangement for deciding knowledge about the natural world is flawed, as it does not originate with the observation of the actual (and obviously extant) objects and processes already existing and functioning in the material world. Theistic religions were formulated (in essence) thousands of years ago when the human mind was still developing its perceptive abilities. Therefore, unverified subjective thoughts and ideas about the outer world became accepted through habit, as representing reality as it is. As time progressed, humanity developed a better method for discerning the reality of the natural world which involved moving the awareness of the mind away from its previous fixation upon inner processes (I.e. thoughts and feelings), and out onto the objects and processes of the (external) material world. This process may be interpreted as the transition from the religious to the scientific mind. Marx defined the functioning scientific mind, which is employed equally by capitalist as well as Socialist scientists! It is the same objective science practiced by both socio-economic systems, with each system treating its populations very differently. Whereas capitalism exploits its populations and reserves the practice of science only for its educated elite, Socialism advocates a systemic social justice through the working class by seizing and controlling the means of production, whilst viewing science as the product of the collective thinking of an entire society (rather than a single, elitist class). The inverted (and therefore ‘unscientific’) thinking associated with theism is employed by the capitalists to psychologically and physically ‘oppress’ the masses and prevent them from developing a true awareness of their circumstance and plight. The is the capitalist maintenance of what Marx referred to as a ‘false consciousness’. This is why religions are privileged within capitalist systems and granted political influence and social power, etc. Within Socialist systems, religions are devoid of any and all political power, and have no oppositional say in the social justice advocated and applied. This is why Socialist religions align themselves entirely with supporting the Socialist system and contributing to the maintenance and development of that system. Although capitalist scientists may agree with Marx’s definition of an ‘inverted mind’, they certainly do not agree with his negative assessment of capitalism, or his call for its overthrow through Revolution! Capitalist scientists both criticize those trapped in the ‘inverted’ thinking advocated by religions, but still continue to support the ‘right’ of people to remain ignorant whilst living within the capitalist system. This is because all modern, theistic religions in the West fully support the capitalist system (which routinely grants them political power and influence), whilst rejecting Socialism due to a feared ‘loss’ of this power and influence. This is how Marx (and Engels) supports science and opposes theistic religions within the realms of socio-economics.

Whilst firmly laying-out his philosophical and theoretical table, Marx does not deny that theistic religion is useful to the oppressed masses, but its use (although ‘comforting’ to the believer) is ultimately futile and a developmental dead-end. The message is essentially that the oppressed working class must give-up any resistance to the oppression they suffer today, for a mystical and far-off reward in an otherworldly ‘paradise’ only accessed following physical death (through injury, illness or natural causes). This fanciful world, needless to say, has never been proven to exist, but the assumption of its existence by the Church is a powerful weapon ‘here and now’ that prevents workers organizing into effective unions, freeing their minds and bodies from the weight of religious ignorance and striving for a World Revolution! Once religious teachings are purged of these capitalist elements, then they become harmless personal pursuits that can even benefit a Socialist society! In the text below, Engels examines the ‘Spiritualist’ challenge to objective science, and cites Isaac Newton and Alfred Russell Wallace (amongst others) as scientists who both progressed human (secular) understanding whilst still remaining convinced that the ‘inverted’ teachings of theistic religions were still somehow ‘correct’ and possess the power to usurp rational thinking. Religions, whilst being stripped of their accrued capitalist corruption must still be studied and understood by secular scholars operating within Socialist systems (as was evident in the USSR with Stalin founding an entire department for Buddhist studies – as well within Communist China today). Indeed, this is an example exemplified by both Marx (who once practiced Buddhist meditation) and Engels, the latter of which makes a very useful investigation (ignored by most modern ‘Spiritualists’), of ‘Spiritualism’ as it was happening during the peak of its greatest popularity, and as many started to ‘question’ the validity of its assumptions and the behaviour of some of its practitioners. 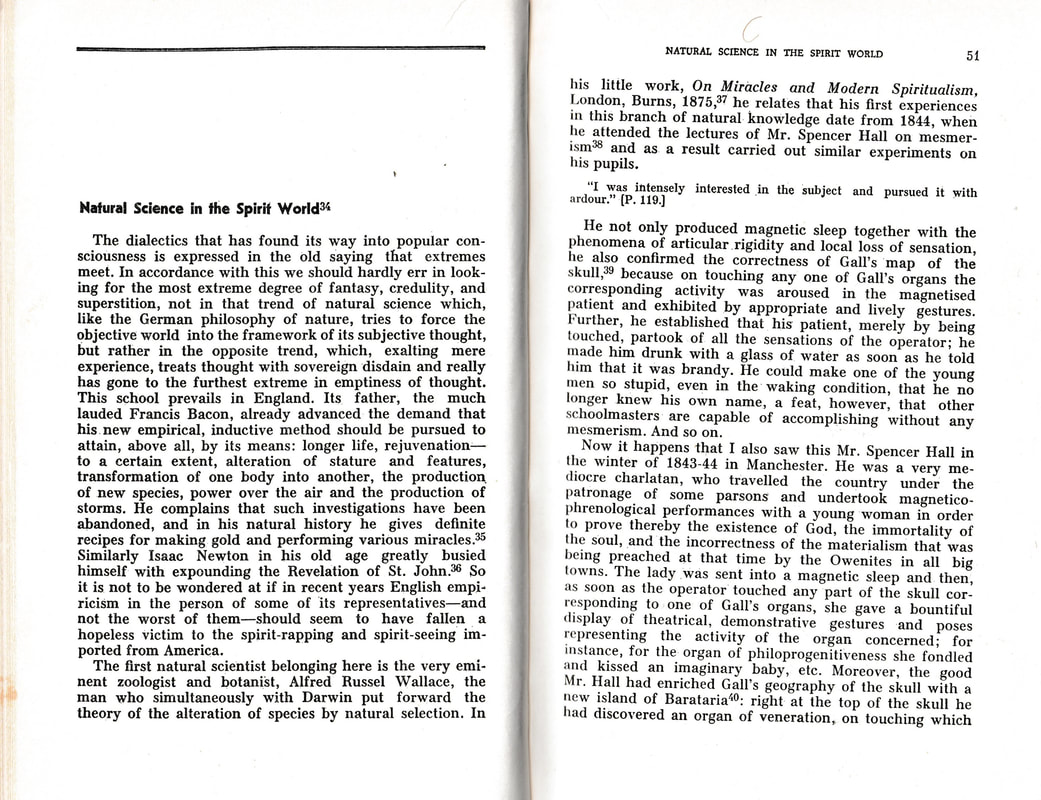 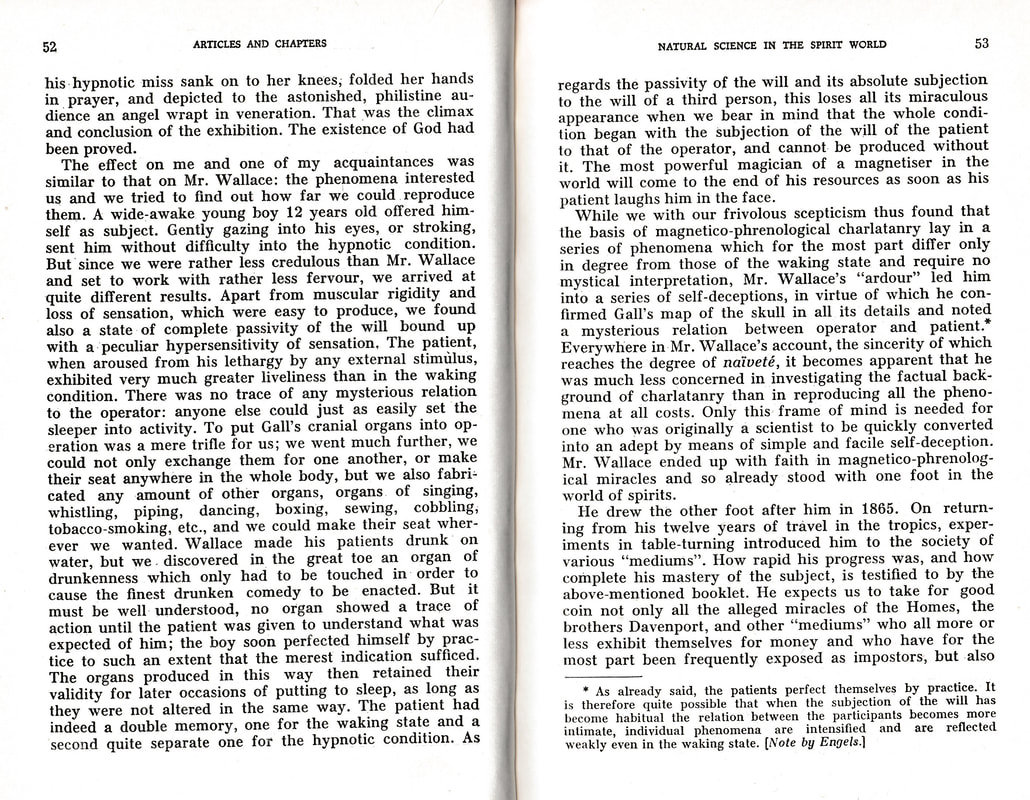 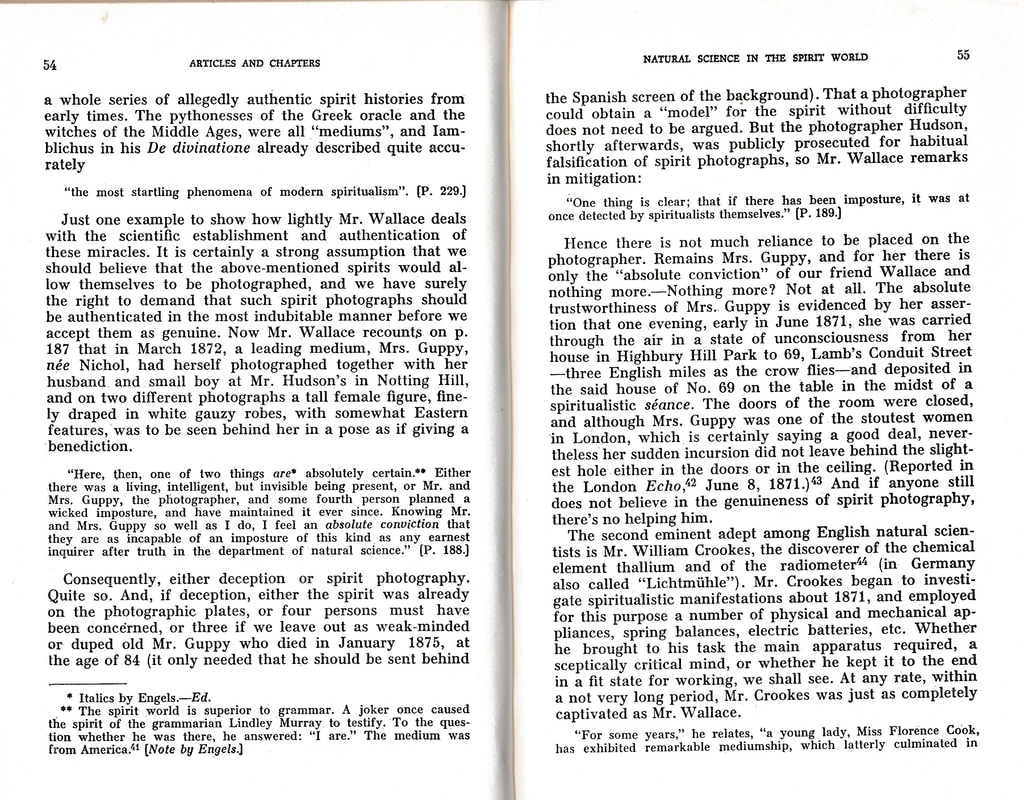 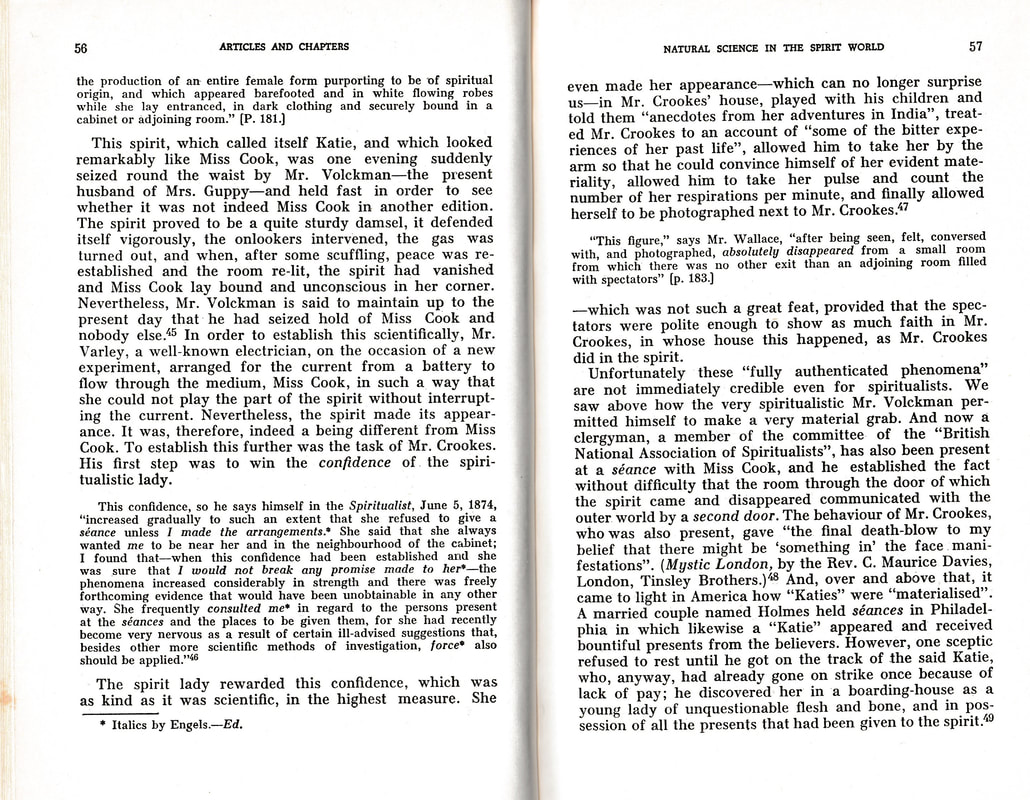 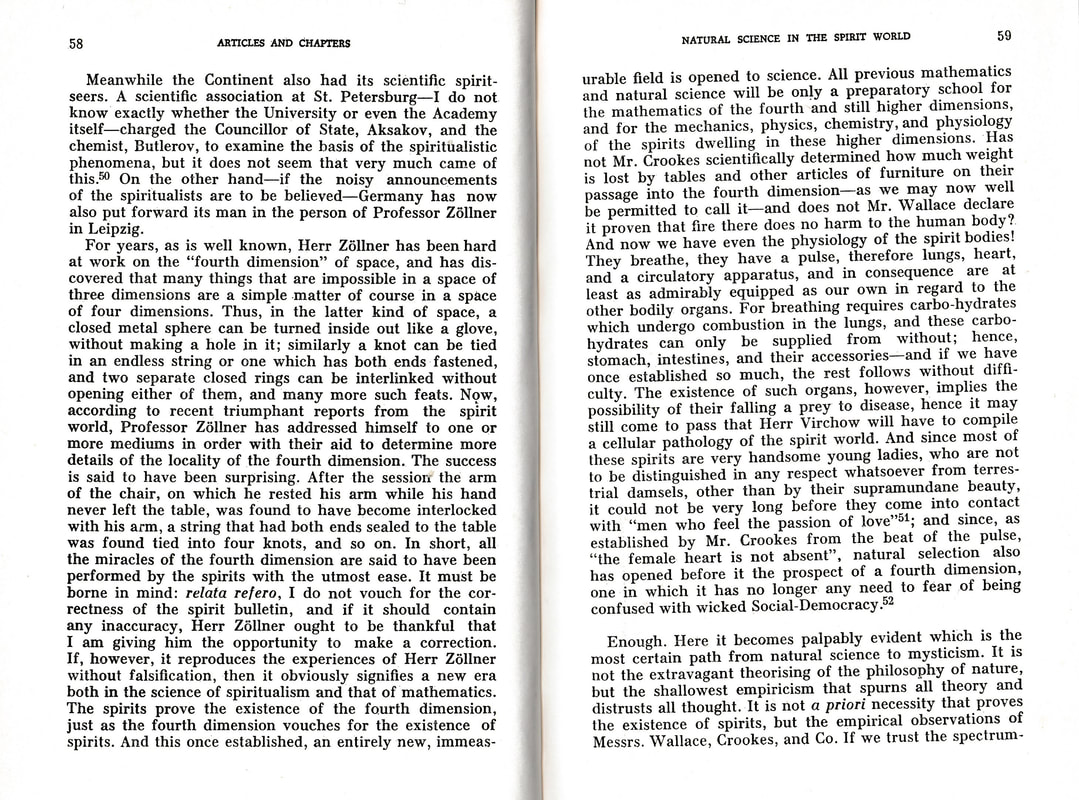 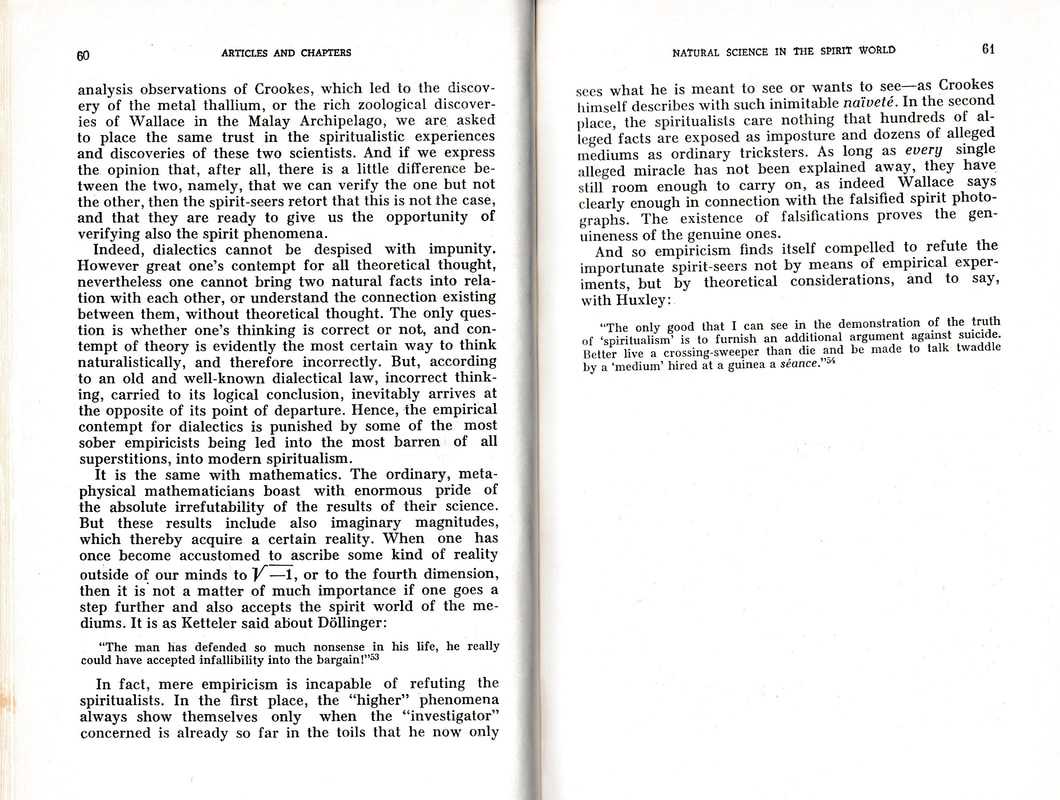 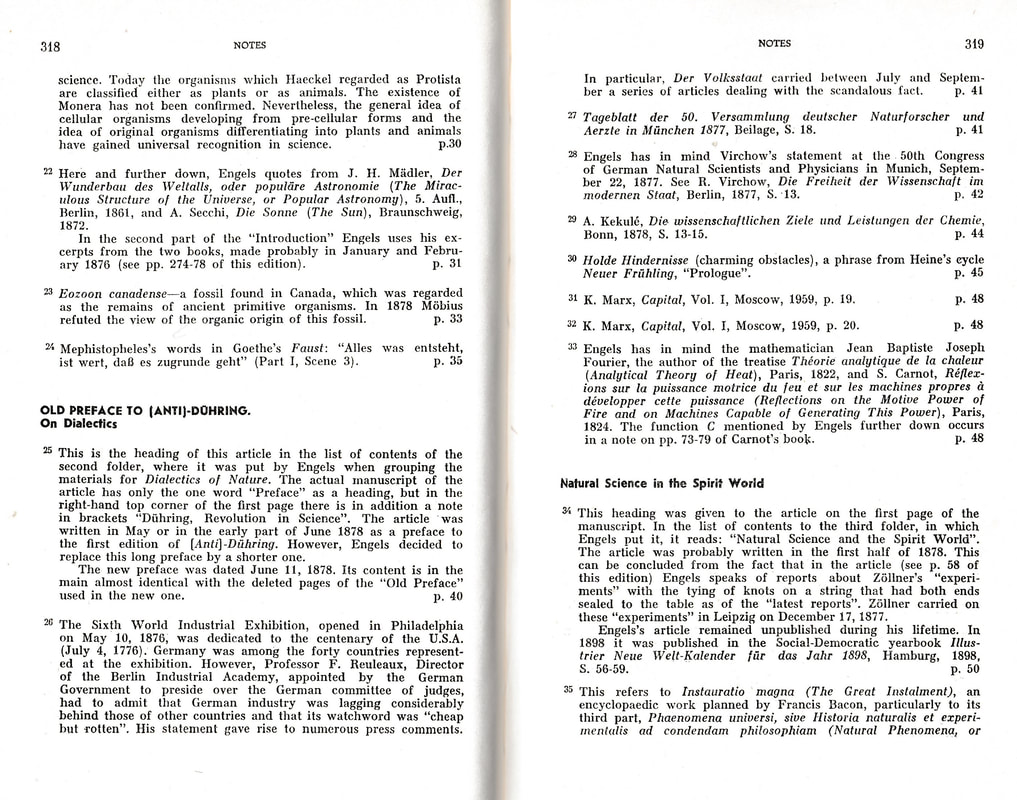 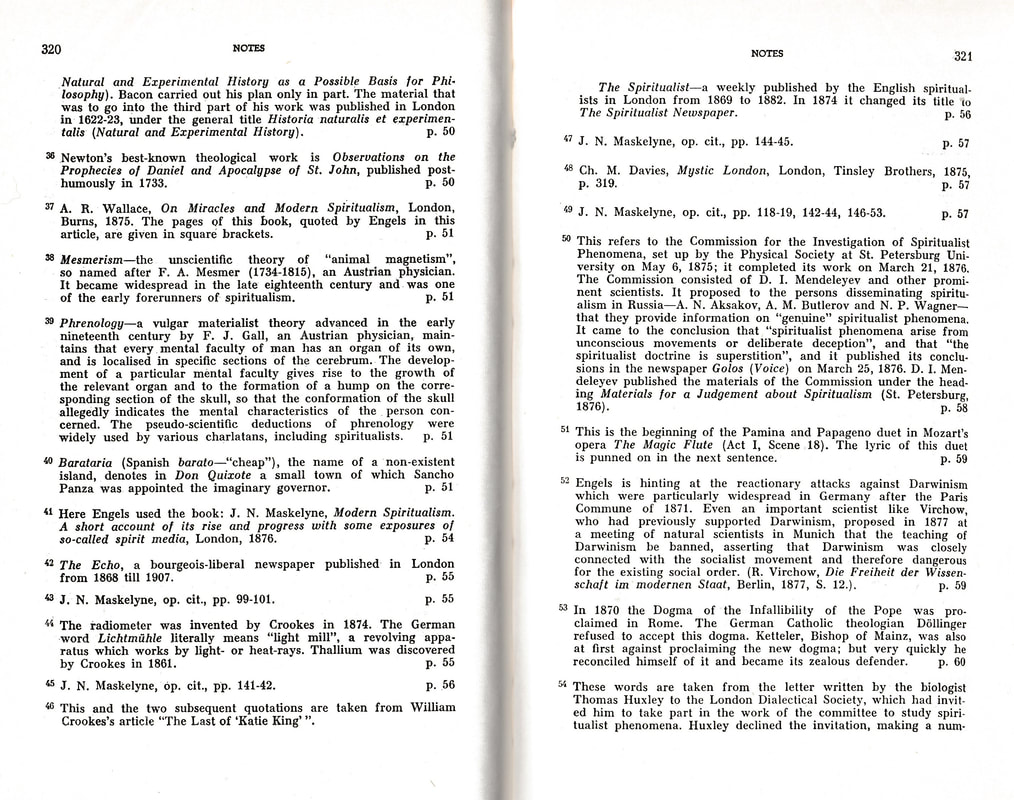 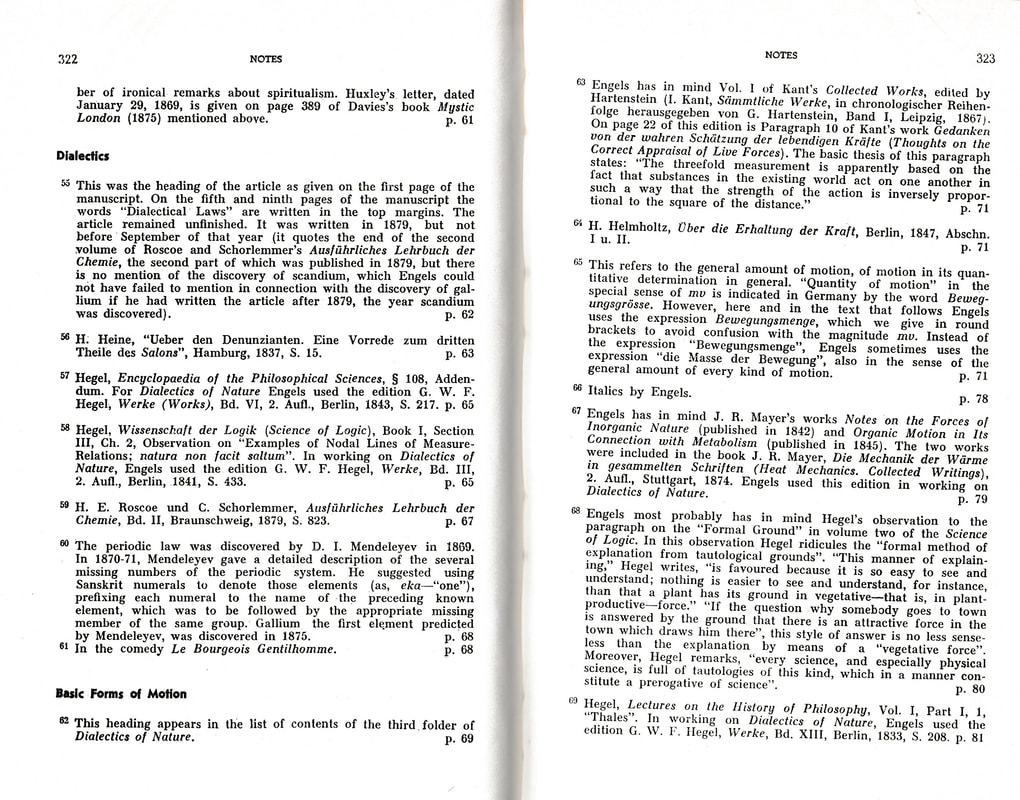