The name of ‘Ho Chi Minh’ (胡志明 – Hu Zhi Ming) is a very familiar name in Vietnam, Taiwan, Mainland China, and through the Chinese diaspora.  In fact the name Ho Chi Minh is held in the same respect as that of Sun Yat-Sen (孫中山 – Sun Zhong Shan).  He handled, fought and then defeated the imperialist Japanese and French regimes in Vietnam, and successfully steered Communist North Vietnam toward a final victory over the imperialist forces of the Western, democratic camp.

In 1930, Ho Chi Minh established the Indochinese Communist Party (which later became known as the Vietnamese Labour Party, and then the Communist Party of Vietnam).  In 1941, Ho Chi Minh founded the ‘Viet Minh’ (越南獨立同盟會 – Yue Nan Du Li Tong Meng Hui) – also referred to as the ‘Union of Vietnam’ (越盟 – Yue Meng).  Following Japan’s defeat in 1945, Ho Chi Minh led the Viet Minh as a Revolutionary Army, and unified the whole of geographical Vietnam under a single Vietnamese rule.  On September 2nd, 1945, Ho Chi Minh formally declared the founding of the Democratic Republic of Vietnam.   As the Republic of China had sent around 180,000 Chinese troops into Vietnam (to disarm the defeated Japanese), the Democratic Republic of Vietnam arranged its government along Kuomingtang lines – with a ‘Nationalist’ faction and a ‘Communist’ faction working together (later, the Nationalist faction would be liquidated, with its members fleeing to South Vietnam where it formed a ‘puppet’ government backed by the USA – becoming the ‘Republic of Vietnam’).  Ho Chi Minh set about ruling a united nation until the French colonialist troops landed on the 17th parallel (separating Vietnam into ‘North’ and ‘South’ sections) – and initiating the First Vietnam (or ‘Indochina’) War.  A major player in these events was Ho Chi Minh.

Above is the generally accepted historical narrative for Ho Chi Minh in the East, but now there is a dissenting voice from Taiwan that claims that the man the world knows as ‘Ho Chi Minh’ is not Vietnamese, but rather a Taiwanese Hakka.  This idea has been voiced by Mr Hu Junxiong (胡俊熊)) from Miaoli County - who has written an excellent scholarly work entitled ‘Research into Ho Chi Minh’s Biography’ (胡志明生平考 – Hu Zhi Ming Sheng Ping Kao).  Hu Junxiong correctly states that ‘Nguyen Ai Quoc was an important Communist innovator in Vietnam, and Ho Chi Minh must be considered the Socialist founding father of the modern Vietnamese nation.’  However, he then goes onto state that ‘Nguyen Ai Quoc is not Ho Chi Minh.’  What does he mean by this statement?

In this book, Hu Junxiong states that within his family there was a Communist hero named Hu Jizhang (胡集璋).  During the era of the Japanese occupation of Taiwan, Hu Jizhang was a member of the Communist Party of Taiwan.  In this book, there is the presentation of much archived newspaper articles, reports, important biographical material, and details of his imprisonment.  After his release from prison, Hu Jizhang fled Taiwan and travelled to Guangzhou in China. It is here that Hu Jizhang was ordered to assume the identity of ‘Nguyen Ai Quoc’ to further the Communist Revolution in Vietnam (and Indochina) along Soviet lines.  In the early 1930’s he was recognised as a prominent member of the Third Communist International.  This book states that records in Moscow have revealed that the real ‘Nguyen Ai Quoc’ in fact died of tuberculosis in 1924.  However, history also shows that ‘Nguyen Ai Quoc’ again appears on the world stage in 1931 as a member of the Communist Party of China, and a builder of Marxist-Leninist movements in Vietnam.  This culminated in the founding of the Communist Party of Vietnam, and Nguyen Ai Quoc was sent to the Soviet Union for advanced study – this is known through Soviet records, which include identity photographs. 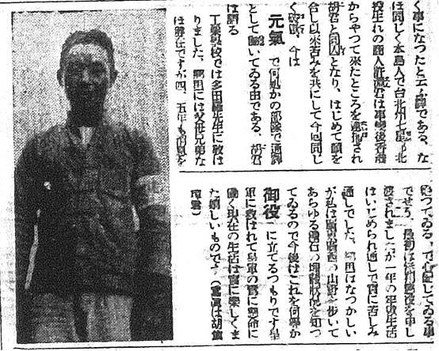 Hu Jizhang - Communist Party of Taiwan Report
When the Japanese imperialists invaded East Asia – Nguyen Ai Quoc first took on the pseudonym ‘Hu Guang’ (胡光), and then later ‘Ho Chi Minh’.  At this point it is important for the reader to understand that the Chinese surname ‘胡’ is usually pronounced ‘Hu’ within Chinese culture, and ‘Ho’ within Vietnam, and is a common Hakka surname in Taiwan.  The theory in the book is that ‘Nguyen Ai Quoc’ later reverted to his real family name of ‘Hu’, or ‘Ho’.

There is discussion in the book about a visit by Ho Chi Minh and a number of other officials, after Independence, to meet the (pre-revolutionary period) wife of ‘Nguyen Ai Quoc’ (it is unclear whether it was in China or Vietnam), but it was reported that when this lady set eyes on ‘Ho Chi Minh’, she stated that she did not know this man.  It is interesting to note that ‘Ho Chi Minh’ seems to be ‘unknown’ amongst the ordinary people – even those who supposedly knew ‘Nguyen Ai Quoc’ quite well.  A close examination of a photograph of ‘Nguyen Ai Quoc’ taken in France in 1923, and a photograph of ‘Ho Chi Minh’ taken in Moscow in 1924, reveal a number of differences, including the eyes and ears.  ​
This book investigates interesting questions about whether Ho Chi Minh was a Taiwanese Hakka, or an ethnic Vietnamese?  It also keeps alive the memory of Hu Jizhang and the Taiwanese Communist Party that was eradicated by the Nationalists when they took control of the island.  It also offers narratives about the ‘disappearance’ of Hu Jizhang, and draws attention to the many vagaries surrounding the life of Ho Chi Minh.

This is an excellent piece of historical research by Mr Hu Junxiong that links old Taiwan to modern Vietnam, and Taiwanese Hakka to ethnic Vietnamese culture.  This suggests that other people should research their own family history and bring to light new and interesting information that helps build a better understanding of history and historical events.  I suspect that in time more information will come to light about the assumed connection between Hu Jizhang and Ho Chi Minh.