The Vibrant Integration of Tibetan Buddhism and Socialism 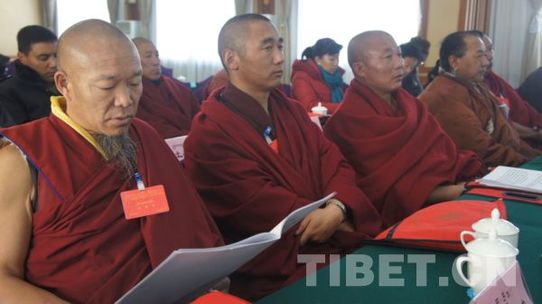 China Tibet Network News reported that on the 11th of January, 2015, the Executive Board of the Tibetan Branch of the Chinese Buddhist Association, held the 2nd session of its Tenth Council in Lhasa.  At this meeting, the Buddhist Association Tibetan Branch President Zhu Kang -Tudeng Kezhu (珠康·土登克珠表示) stated that Tibetan Buddhism and Socialism had undergone a vibrant interaction and integration within society, and that Tibetan Buddhism now possessed all the relevant conditions to adjust and fully function within a Socialist society. He went on to explain that in his opinion, Buddhism is a philosophy of peace, and that a Buddhist should not harm any living thing.  This is because Buddhism advocates loving kindness and compassion to all beings without acceptance.  The Buddha Shakyamuni stated: ‘I teach a living path that is forever evolving and adapting to circumstance.’  Therefore it is the duty of every Buddhist to adjust to new situations and apply the Buddha’s teachings accordingly.  In the case of Tibetan Buddhism, it possesses the potential to be innovative and to keep-up with times by adapting to new circumstance and integrating into a Socialist society.  Not only this, but Tibetan Buddhism can positively assist the building and development of society, whilst simultaneously assisting the general public.

Zhu Kang -Tudeng Kezhu further explained that; ‘After the democratic reforms in Tibet, there was a necessary separation of ‘Lamaist Institutions’ from ‘State’ as a means to achieve a secular society.  This purified the political system (freeing it from superstition and myth), and cleansed the spiritual teachings of Buddhism by removing the polluting influences of political thinking, that had been erroneously imported into its philosophy (by corrupt lamas seeking temporal power).  Originally, when the various schools of Buddhism took root in Tibet, all the founding ancestors were completely pure and had no ambitions whatsoever for political influence and power.  They followed the Buddha’s teachings without generating greed for political power in the world of delusion.  Furthermore, Buddhism has existed for over two thousand years and it has spread to Tibet, China and other parts of Asia (through the Theravada School), but it was only in feudal Tibet that a corrupt Buddhocracy (i.e. temporal society politically controlled by unelected Buddhist monks – in this case lamas) developed – and nowhere else.  Buddhocracies did not develop anywhere else because the concept of Buddhist monks getting directly involved in politics is against the Buddha’s teachings, as he rejected all form of political involvement (as a corrupting influence in the mind).’

As a means to protect the rights of those who believe in religions, or ‘Constitution’ guarantees ‘Freedom of Belief’.  This is specifically dealt with under the section entitled ‘Regulations on Religious Belief’.  Everybody has a right to follow (or not follow) a religious path with all the rights and interests that entails.
Zhu Kang -Tudeng Kezhu then stated that within Tibet there are many Sects such as Nyingma, Sakya, Kagyu, Gelug, and Bon, etc, and there is only a very slight difference in there teachings, and all revere the Buddhist Tripitaka.  All agree that the point of Buddhist teaching is not the seeking or acquiring of political power or influence in society, but rather complete and full realisation of inner enlightenment.  The emphasis here is on the ‘oneness of humanity’ that shares a common inner spiritual (or ‘psychological’) essence.  Therefore modern Tibetan Buddhism should follow the example of the distant past, and pursue the path of authentic Dharma and work for the harmonious, peaceful development and evolution of society, the nation and all beings.