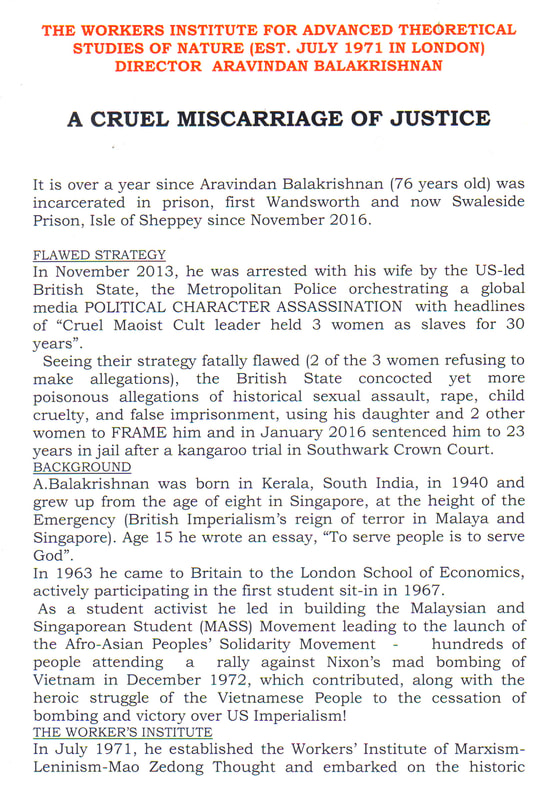 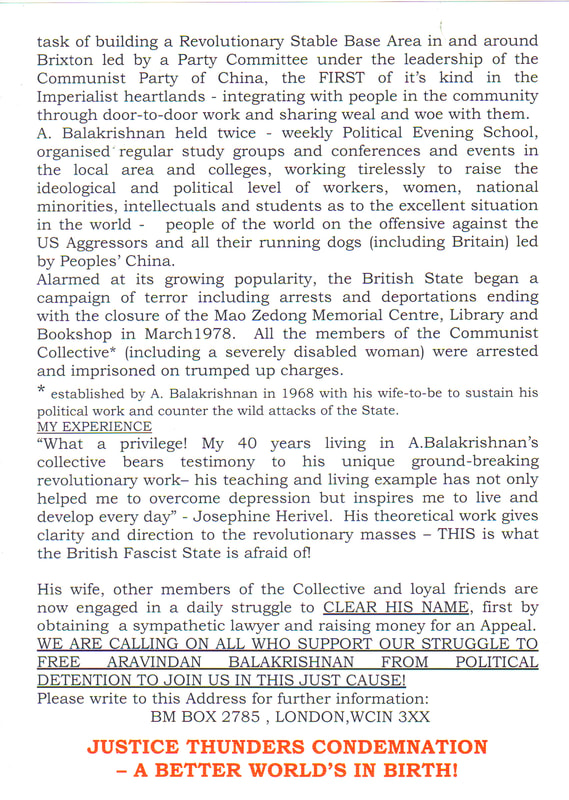 For an individual to be found ‘guilty’ of a crime, the ‘crime’ must first exist on the statute books. This is because an individual cannot be found ‘guilty’ of a crime that does not exist. If an activity is not defined as a ‘crime’, then there is no legal or lawful case to answer. This being the case, why was the Director of the Workers’ Institute – Aravindan Balakrishnan – (and other members of the Collective), targeted by the British State from 2013 onwards? One of the allegations levelled at the Workers’ Institute was that of ‘modern slavery’. Although the UK was already subject to Article 4 of the Human Rights Convention (regarding the holding of a person in slavery or servitude or requiring a person to perform forced or compulsory labour), the reactionary (right-wing) Tory (and LibDem) wanted to appease their far-right support-base by attacking the non-White community in a politically acceptable manner. There will always be non-White supporters of White racism who cooperate with the status quo for the acquisition of personal gain, etc, and this is certainly the case with the British State’s attack upon the Workers’ Institute (2013-1016).

The problem the British State had in this racist exercise was that Article 4 of the Human Rights Convention tends to be used to support the rights of Non-White people against White people – as modern slavery is understood as being the product of Eurocentrism, imperialism and colonisation.  The Tory (and LibDems) could not take the risk of applying this law to an oppressed community of non-White people living in South London, who had a history of being victimised by the British State because they chose to manifest their self-determination by peacefully following the ideology of Mao Zedong Thought. Mao Zedong interpreted the thinking of Marxist-Leninism for the Revolutionary conditions of China between 1920 – 1949, until the Revolution was won and the workers (led by the Communist Party of China) seized the means of production and transformed China for the better! The UK usually prides itself on its tolerance, freedom of thought and freedom of speech. This is the country that Lenin and Stalin visited and which gave Marx and Engels political asylum. In 2013, however, the right-wing British State was planning a racially motivated attack upon the Workers’ Institute.

British institutional racism mirrors the far-right variant in that the policies that manifest it, are conveyed as ‘normal’ and ‘natural’. Not only this, but a very well tried and tested tactic of the British State is to recruit non-White support in any ‘racist’ attack upon a non-White community. The Tories (and LibDems) wanted to pass some type of ‘anti-slavery’ legislation in Parliament as a means to ‘camouflage’ the Tory (and LibDem) attack upon the disabled community (which by 2016 had led to the deaths of at least 120,000 disabled people), and which was being investigated by the United Nations. Tory (and LibDems) cuts and reforms to the Benefit System in the UK had created waves of abject poverty sweeping across the nation, part of which involved the ‘forcing’ of young people to carry-out full-time work (for their Unemployment Benefit). This policy was found to be ‘illegal’ in Court and tantamount to ‘slavery’. A private business would allow a young person to work 36 hours a week for £45 per week – but the business would not employ the same person to do identical for a proper wage!

​Whilst Aravindan Balakrishnan, his elderly wife, and the entire Collective of the Workers’ Institute was being harassed and persecuted by the British State, the Tories (and LibDems) were working behind the scenes to ‘rush’ a ‘modern slavery’ bill through Parliament, the legal content of which could then be used to prosecute and imprison Aravindan Balakrishnan. The Modern Slavery Act 2015 became ‘Law’ on March 26th, 2015. This provided the British State with nearly a year to mix and match the story being fabricated against the Workers’ Institute, so that it appeared that the various associated events appeared to conflict with (Prime Minister’s Theresa May’s) Modern Slavery Act 2015. The daughter of Aravindan Balakrishnan was enticed away from her family home by the forces of the British State, and brain-washed into internalising a set of ‘false memories’ which were later used to condemn her father (without any ‘objective’ evidence). Surprised members of the Workers’ Institute informed the British Authorities that the Collective was peaceful, progressive and self-empowering. Aravindan Balakrishnan (who had attended the London School of Economics), was described as a kind and wise leader of the Commune who had a daughter who was growing-up and going through the usual growing pains. The British Authorities declared all this positive evidence as being the deluded product of ‘Stockholm Syndrome’. What we are seeing here, is the dialectically ‘perverse’ situation of the racist ‘White’ establishment (the inventers of modern slavery), who as part of their right-wing political bias, invented a story which involved an institutional attack upon a non-White group, as a means to ‘hide’ or ‘obscure’ the destructive nature of their own policies in the UK!