Society for Co-operation in Russian and Soviet Studies 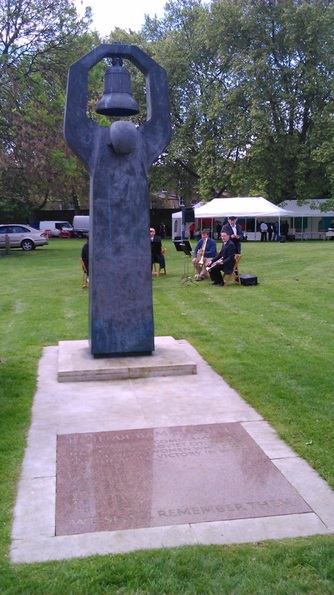 This memorial commemorates
The 27 million Soviet citizens &
Service men & women who died
for the Allied Victory in WWII
WE SHALL REMEMBER THEM
Today, May the 9th, 2014, marks the 69th year since the forces of fascism represented by Nazi Germany and her allies, unconditionally surrendered to the Soviet Red Army in Berlin, bringing the war in Europe to an end.  A delegation from the Buddhist – Marxism Alliance (UK) visited this event as an expression of solidarity and respect.  Fascism had been defeated, but at an awful cost in human life and material destruction.  The Soviet Memorial was unveiled in 1999 in the Geraldine Mary Harmsworth Park, (which is part of the grounds of the Imperial War Museum situated in South London), and is the creation of the Soviet Memorial Trust Fund.  About a thousand people gathered to watch around 30 British and Soviet flag-bearing veterans march smartly into the park and line up behind the memorial. 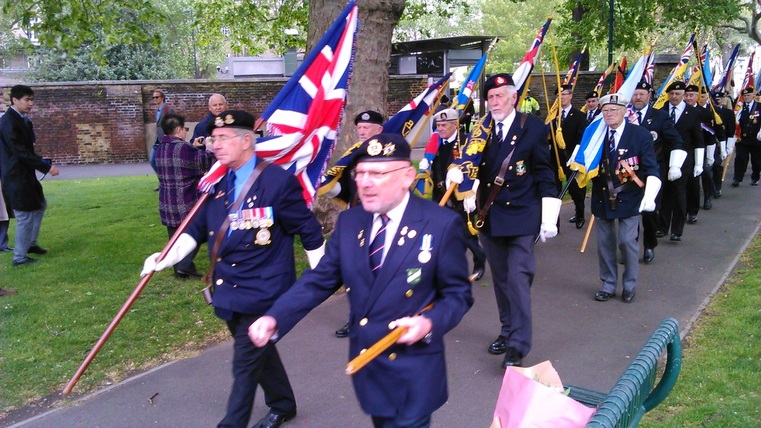 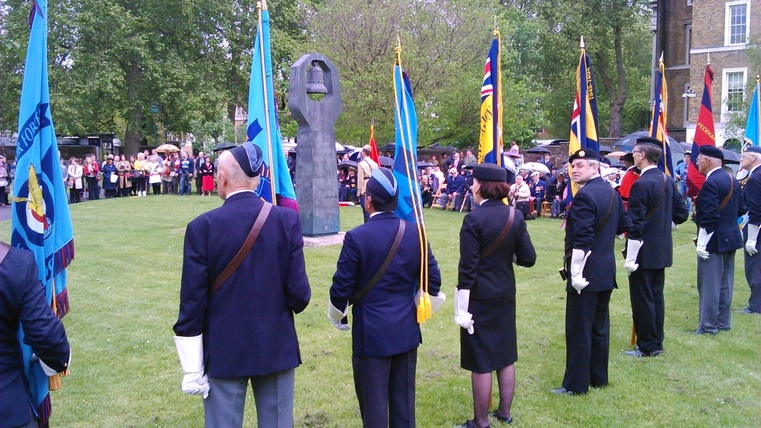 Philip Matthews, Chair, Soviet Memorial Trust Fund
Cllr Abdul Mohamed, The Mayor of Southwark
Minister-Counsellor Alexander Kramarenko, Charge d’Affaires, Embassy of the Russian Federation.
The Rt Hon Simon Hughes, MP for Bermondsey & Old Southwark
Philips Matthews made an excellent speech quoting Stalin, stating how grateful the Soviet was for the European (and USA) support during the Great Patriotic War, and how he (Stalin) valued the efforts of the Western forces as they invaded France and began to fight their way across Europe, freeing it from Nazi control.  Stalin said that the Soviet people drew strength from this show of support.  The Mayor of Southwark, Abdul Mohamed, spoke about the importance of the defeat of fascism and communities living in peace, whilst the Russian Embassy representative - Minister-Counsellor Alexander Kramarenko – made a very poignant speech stating that as long as Russia exists, the Soviet sacrifice will never be forgotten. He spoke at length about the importance of the defeat of fascism in 1945, and how it is important to remain forever watchful in the present time.  He reminded the crowd that fascism had re-emerged in the Ukraine, and that it was a threat to world peace. Indeed, the Ukrainian delegation refused to visit the memorial on the same day as the surviving veterans (who had fought for their freedom in WWII), but instead elected to lay their wreath a day earlier.  The only speaker who was noticeably out of place was Liberal Democrat MP Simon Hughes representing the current and highly rightwing ConDem Coalition government of the UK. Simon Hughes is the Minister of State for Justice and Civil Liberties, and yet ironically attracted controversy in 2013 with his pro-Christian, homophobic rhetoric, which he used when expressing his opposition to gay marriage, and the principle of equality between gay and straight people. 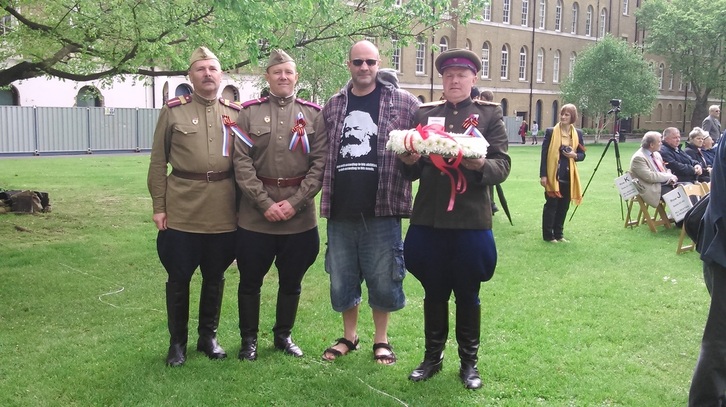 For a couple of minutes he struggled to justify the presence of a Soviet War Memorial in modern Britain, particularly as the current British government he represents (together with the USA) openly supports the neo-Nazi groups who have taken-up arms in the Ukraine – eulogising these thugs as ‘freedom fighters’.  Hughes openly contradicted the Russian diplomat by stating that the British government has ‘friends’ in the Ukraine, and that Russia should reconsider its position.  Whilst the rightwing government he represents strips the disabled of their benefits and demeans the poor by making them work for nothing (modern slavery), and is busy dismantling the British Welfare State and the National Health Service (NHS), Hughes had to issue weak and unconvincing platitudes that he opposes fascism!  The current upsurge in far-right political parties in the UK is a direct response to the intolerant and barbaric behaviour of the ConDem Coalition, whose own fascism is self-evident. 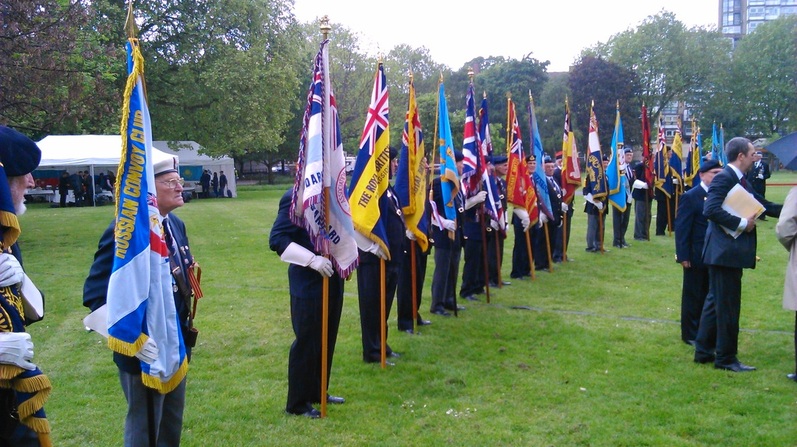 A number of people were present who dedicate their spare time to keeping the traditions (and uniforms) of the Soviet military alive.  These people mingled with the crowd and were very popular amongst visiting Russians, some of whom had fought in the Great Patriotic War, but who were not taking any official role in the ceremony.  Russian television was present, but there was a distinct lack of British media coverage, despite the fact that many British veterans were given Russian military medals – after 69 years of waiting – for the part they played in the defeat of fascism. The wait has been due to the British government vetoing the awarding of these medals.  Wreaths were laid at the foot of the monument by representatives of many governments of countries that once formed the USSR, and rather oddly, a wreath was laid by the Embassy of the United States of America.  Colonel Sean English laid the UK Wreath as a representative of the Ministry of Defence. 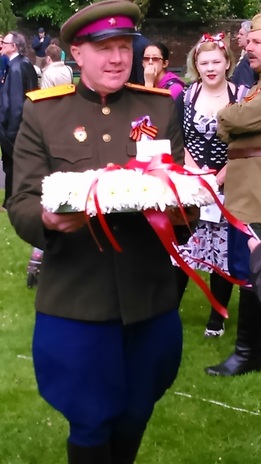 The Last Post was played followed by a two minute silence.  Ceremonies like this are crucial as they remind the young of the important facts of the world that existed before they were born.  The Soviet War Memorial within the grounds of the Imperial War Museum should remind the people of the UK of the great leftwing political tradition that is an important and integral part of their cultural heritage. 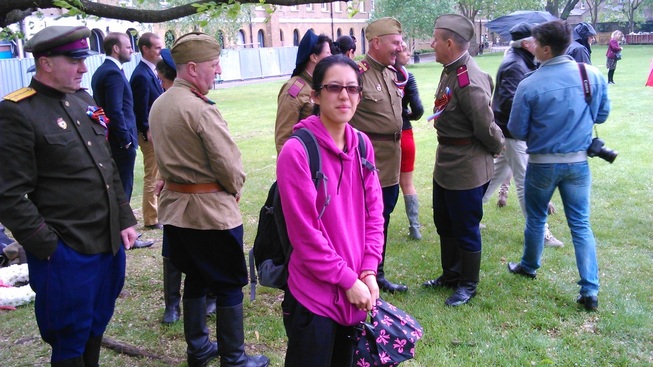