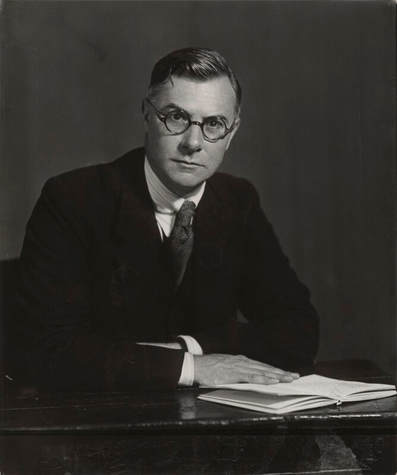 EH Carr (1892-1982)
​Whilst referencing Edward Hallett Carr’s excellent ‘The Soviet Impact on the Western World’ (MacMillan), 1946, I discovered a newspaper clipping tucked into the dust-cover of the book. From the tone and demeanour of the reporting, it is from a British newspaper and concerns a review of the American book entitled ‘Russia’s Soviet Economy’ (Cape), authored by US academic Harry Schwartz and first published in 1953. This book very much represents a US anti-intellectualist approach toward Soviet history, one that utilises whatever reliable economic facts were available in the West (or even in the USSR) at the time and attempts to weave a false narrative as a means to ‘disinform’ about the Soviet Union to a Western audience. In other words, ‘Russia’s Soviet Economy’ is nothing less than a ‘US Cold War’ propaganda exercise that combines certain economic facts with fabricated historical interpretation. The review is very much in the style of EH Carr and it is logical to assume that EH Carr is its author (hence the inclusion of this clipping within the covers of one of his books). EH Carr was such a prominent British academic, and so respected for his academic and practical knowledge and scope of output, that he never subscribed to the development and deployment of US generated anti-Soviet propaganda. Indeed, he may be thought of as one of the early ‘resistance fighters’ to this form of US fascism. In this regard, EH Carr represented everything that was good and great about Western (and British) academia, in the face of a rampant and highly dangerous US anti-intellectualism.

EH Carr states that he appreciates the hours of painstaking work that the US author and his academic team must have engaged in whilst compiling the data contained therein, but profoundly disagrees with the highly negative and disinforming narrative used throughout the book. For instance, EH Carr clearly exposes the US illogicality operating behind this type of disinforming when he observes that on the one hand, the US author would like us to accept without question that the Soviet Union is a grave and threatening danger to the welfare and survival of the Western (capitalist) world, whilst simultaneously asserting without any sense of irony that the ‘Socialist’ approach to economic management preferred by the Soviet System is bordering upon the demonic, the manic and the insane! EH Carr concludes that if the Socialist economy of the USSR is so deficient and corrupt (a viewpoint for which there was no evidence), then why would the US ideologues consider the USSR to be either a military or economic threat to the West? Of course, there is no argument to this US disinformation which is designed to be blindly ‘believed’ rather than objectively ‘questioned’.

In its attempt to divert the Western working class away from accepting, engaging or emulating the USSR (and creating a Socialist Revolution in the West), the US anti-intellectualists propagated the ‘myth’ that the USSR prevailed over Nazi Germany during WWII not because of its superior Socialist society, but was ‘saved’ by her own ‘backwardness’. This form of anti-Slavic racism is astonishing but EH Carr – writing in the 1950’s as the US Cold War offensive was underway – informs us that such an illogical and counter-intuitive assertion was a fundamental piece of US anti-Soviet academia. Just as in modern times which have seen Obama and Trump desperately trying to start a war with modern Russia, in the decades immediately following WWII (with the exception of JFK) the US Government was trying to achieve exactly the same result with Soviet Russia! Undermining the author’s anti-intellectual narrative with a brilliant ease, EH Carr states:

‘In the Soviet Union, Mr Schwartz tells us, “coordination of economic activity” is achieved “on the basis of decisions made by a relatively small group of persons“ instead of, as under capitalism, “through some kind of market mechanism.” The unconscious assumption that capitalist procedures constitute a natural and normal process, and Soviet methods a form of deviation from them or distortion of them, pervades Mr Schwartz’s treatment throughout. The assessment of the relative merits of the two systems is not in question; on the conscious level, Mr Schwartz makes a commendable effort in eliminating prejudice and bias. But it may be suspected that, apart from all other obstacles to understanding, the first essential approach to a story of the Soviet economy is a recognition that it does not merely employ different methods of achieving “coordination of economic activity”, but directs economic activity to different goals and purposes, or at any rate ranges these purposes according to a totally different scale of priorities.’

The difference is that EH Carr objectively reports history, providing the known objective facts with a masterful (and well researched) narrative, whilst the US Cold War approach tells the reader ‘what’ and ‘how’ to think (irrespective of evidence). In this murky world of anti-intellectualism, the rational capability of the human mind is compromised into a) constructing, and b) perpetuating a historical falsehood which is an inversion of reality as it actually exists. EH Carr does not just rhetorically or ideologically ‘oppose’ this US anti-intellectualism, he elucidates with a pin-point accuracy exactly where the ideologues are acting with an intellectual deficiency. This is the function of a true academic as EH Carr never says he agrees with the USSR – or disagrees with America – but merely states continuously where the US academics (and their allies) are operating a conspiracy of consciousness that deliberately misrepresents Soviet thinking and Soviet practical reality. This is why I consider the wealth of books written by EH Carr about the Soviet Union to be a vital source of objective knowledge in the English language, and worthy of preservation and extensive study. Like the British Journalist Alexander Werth, EH Carr would not accept the UK Establishment’s ‘blind’ adherence to an anti-Soviet US foreign policy that was premised upon a deliberate ‘ignorance’ and ‘sullying’ of the facts.

This is why I would recommend EH Carr’s three-volume series entitled ‘A History of Soviet Russia – The Bolshevik Revolution 1917-1923, MacMillan, (1950) – which readily admits that the United States government and its academia – has taken a very close interest in the unfolding (historical) events of the developing Soviet Union (since its inception in 1917), amassing very important libraries of Russian literature translated into English. America, as the bastion of modern consumer capitalism (and bourgeois political domination), was (and still is) obviously concerned about the retainment of its predatory (capitalist) system, and part of this study has been the collecting of good quality historical data from the USSR. Indeed, as the USSR seldom released data into the hands of non-Communists or foreign powers (a policy EH Carr considered a ‘mistake’), he had to rely in part on this reservoir of US compiled information. This being the case, it is obvious that the Data the US compiled throughout its universities, libraries and institutes did not support the erroneous conclusions projected through the implementation of the US Cold War (anti-intellectual) assault upon the history and reputation of the Soviet Union. This being the case, what happened? It would appear that a group of men in a smoke-filled room assessed the so-called ‘threat’ to US (capitalist) hegemony (both within and without the US), and decided upon a deliberate propaganda offensive of deliberately misrepresenting the facts, and linking this offensive with the granting (or withdrawing) of US economic aid abroad (supported by granting and withdrawing military aid and protection), buttressed with the very real and ongoing threat of US military invasion, regime change and the destruction of any regime that defied this US propaganda offensive, sided with the USSR or developed any remotely ‘Socialist’ leaning administration. In his ‘France 1940-1955’ Alexander Werth explains in detail how this US anti-Soviet regime was implemented in post-WWII France, and how the British Labour assisted in this process.

Readers will notice that EH Carr also reviews ‘Mr Zavalani’ (i.e. the Albanian Tajar Zavalani) and his book entitled ‘How Strong is Russia?’ (1951), which again is found deficient in academic integrity as its US-inspired anti-Soviet stance does not stand-up to scrutiny – certainly not by someone as qualified and experienced as EH Carr. This book presents yet another US disinformation strategy which saw disgruntled former Communists travelling to the West, being granted asylum, given a house, a job and a bank account full of cash they had not earned, in return lending their name to various US anti-Soviet projects (giving the false impression they were a) present, and b) speaking from personal experience. EH Carr immediately reveals the central fallacy in Zavalani’s negative narrative regarding Soviet five-year plans by stating that Zavalani (a former worker within the Communist International) only resided in Moscow from 1925-1930 (and even then, not continuously) and was only present during the beginning of the first five-year plan before leaving. In other words, whilst concocting a false narrative about things he seemed to have experienced – Zavalani was not even in the Soviet Union! Of course, Tajar Zavalani eventually became a fascist supporting the CIA-funded (righting) National Committee for a Free Albania, and from 1940 found a job working as an anti-Soviet journalist working for the BBC. In his ‘How Strong is Russia?’, Zavalani is warmongering on behalf of the United States and suggests that the USSR is inherently ‘weak’ and could be militarily defeated in an easier manner than most would think possible, even if it meant the West was partially destroyed in a nuclear exchange! Laughably, Zavalani claims that ‘Russia’ was the aggressor in Korea (during the Korean War 1950-1953) – when it is clear from historical records that the North was continuously attacked by the US-funded and trained South Korean forces BEFORE the North decisively retaliated (with the eventual assistance of Communist Chinese Volunteers). The US suffered humiliating military defeats in Korea and Zavalani’s (1951) book appears to be an attempted ‘call to arms’ of the capitalist world to come to the military aid of a beleaguered United States military. EH Carr is of the opinion that no sane person would take Zavalani’s opinion seriously, but if it were to be taken seriously, the true strength of the Soviet Union would be displayed to the world yet again!