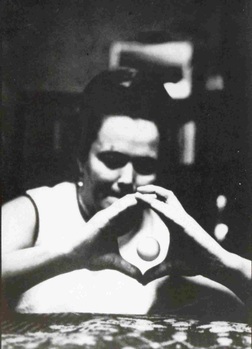 Nina Sergeyevna Kulagina (1926-1990) was an ordinary Soviet (Russian) Citizen who joined the Red Army at the age of 14 and fought against the Nazi German invaders of the USSR during WWII in the Tank Regiment.  Within the Socialist system of the USSR all class and gender discrimination had been abolished in both principle and practice since the Communist Revolution that brought Lenin (and the Bolsheviks) to power in 1917.  During the 1960’s Nina Kulagina became famous not only within the USSR, but throughout the world, for her apparent ability to move objects with her mind.  This fame was produced primarily through short clips (of usually ‘silent’) film footage being released by the Soviet academic community that were freely viewed across the globe.  At this time, Nina Kulagina was in her 30’s and invariably described as an ordinary house wife, and indeed her clothing, appearance and general demeanour in the film clips would suggest this to be a fitting description.  A typical example of this film clip can be viewed here:
Nina Kulagina stated that her psychokinetic abilities began in her home.  This is how Kulagina described the beginning of her powers to two US writers – Sheila Ostrander and Lynn Shroeder – both of whom travelled to the USSR to interview her:

‘I was very angry and upset one day.  I was walking toward a cupboard in my apartment when suddenly a pitcher in the cupboard moved to the edge of the shelf, fell and smashed to bits’ [i]

Kulagina further explained that after that other objects moved about the room by themselves, doors opened and closed, and lights switched on and off with no obvious physical stimulus.  Initially, Nina Kulagina was unaware that her will-power was the trigger for these events, and viewed what was happening as if she were witnessing some kind of poltergeist activity.  However, during the 1960’s the Soviet scientific establishment was apparently interested in the advanced use of the human mind, and the type of powers this might entail.  Nina Kulagina was said to have been part of a research programme involving the exploration of ‘eyeless sight’, whereby individuals were tested for the ability to perceive colour with their finger-tips.

During these experiments, Kulagina was discovered to be able to move physical objects around the environment through the concentration of her will.  She could move a selection of objects relatively small distances across a table-top (even when an air-tight flexi-glass box was placed over the objects).  The only time she not could move objects was when the objects were placed in a vacuum.  It was also reported that on one occasion she was observed separating the white of an egg from its yolk (which was in a saline solution).  The British researcher Benson Herbert reported that when Kulagina touched his arm with her hand, he experienced an intense pain and a burn mark appeared that took eight days to heal.  Medical assessments of her physical condition during displays of psychokinesis suggest that Kulagina was suffering from enhanced levels of stress at the time which involved her pulse recorded as high as 200 beats per minute.  The brain activity at the rear of her head was recorded as being four times greater than normal, and it was also noted that a magnetic field formed around her body. After a two hour session of demonstrating her psychokinetic ability, Kulagina would typically lose two pounds in weight, and suffer from dizziness, muscle fatigue and insomnia.

Unlike many of her Western counter-parts in the paranormal industry, Nina Kulagina never benefitted financially from her ability.  This is probably due to the Soviet system which discouraged such obvious exploitation, and the fact that as a Soviet Citizen, it never occurred to Kulagina to ask for a fee or court any self-serving publicity.  Also unlike many of her Western counter-parts, Nina Kulagina was never conclusively proven to be a fraud – although anti-Soviet propaganda originating in the West has suggested that she was a fraud who had been caught-out a number of times fabricating her psychokinetic abilities.  Being exposed as a fraud in the West does not seem to prevent Western peddlers of the ‘paranormal’ from pursuing a lucrative career – as the life of Uri Geller testifies.  The Kulagina case, however, is perplexing for a number of reasons.  Firstly, a Marxist State – as the Soviet Union was – followed Scientific Socialism as devised by Karl Marx and Friedrich Engels during the 19th century.  A corner-stone of this philosophy is that bourgeois society is the product of an inverted psychology which generates inverted systems of thought.  Theistic religion was thought by Marx and Engels to epitomise this inversion which constantly places the cart before the horse whilst insisting on calling this arrangement both ‘correct’ and ‘logical’.  In the case of theistic religion, for instance, an ‘idea’ of a god was generated in the human mind and then mistakenly ‘projected’ upon the objective world.  Once this ‘divine’ image had been falsely established as existing independent of the human mind that had created it, all kinds of imagined powers was attributed to it, including the bizarre notion that ‘it’ had created the entirety of creation.  The reality, of course, is that ‘god’ was nothing more than a misconstrued ‘thought’ in the minds of humanity – and all the supposed ‘miracles’ (which are said to work through the temporary suspension of the laws of nature) nothing but the product of the outlandish claims of the uneducated imagination.  Moving objects without physical contact constitutes a ‘miracle’ within the Judeo-Christian church.  This is quite literally the ability of god and/or his son on earth.  It is also entirely illogical as the pure conscious function of the mind can only move the physical body within which it exists.  Consciousness effects the environment through directing the body within which it exists to move around and produce the very real agency of physical touch.  Therefore although it can be said that the human mind can move a cup by placing the hand of the body within which it exists upon it, the same consciousness cannot move the cup simply by ‘thinking’ about the cup moving without touching it.

As the Soviet Union abolished distorted bourgeois thinking and replaced it with progressive proletariat science (whilst instigating a comprehensive and system-wide State education system), why by the 1960’s would an otherwise ‘sane’ Soviet Citizen suddenly claim to be able to perform what amounts to a secular version of the kind of miracles preserved within the Judeo-Christian tradition?  Even if this type of ability did appear (or seem to appear) why would the Soviet Authorities allow it to become common knowledge?  The problem with the ‘paranormal’ as a subject is that it is very much the product of Judeo-Christian theology interpreted for the modern age.  Paranormal phenomenon are in this context the miracles associated with religion, manifesting ‘outside’ of the control of the church itself.  Within Soviet thinking this would seem to suggest a return to pre-Revolutionary conditions, unless, of course, the human mind is found to possess certain types of unusual abilities completely independent of religious mythology.  If the example of Nina Kulagina was not the product of Western anti-Soviet propaganda, and not the consequence of religious faith, then it remains a tantalising example of what the human mind can do when it is educated within a proletariat system free of the conditioning of religious ignorance.

Additional information:  The name ‘Nina Sergeyevna Kulagina’ is an English language transliteration and is written in Russian script as ‘Нине́ль Серге́евна Кула́гин’.  This is also transliterated into English as ‘Ninel Sergeyevna Kulagina’.  Nina Kulagina was born on the 30th of July, 1926 and she passed away in April, 1990.[ii]  The forces of Nazi Germany invaded the Soviet Union on the 22nd of June, 1941.  As she immediately joined the Red Army soon after the Nazi German invasion (but before the 30th of July 1941) Nina Kulagina was indeed 14 years old at the time of her enlistment.  Her biography reports that she survived the Great Patriotic War (1941-45) but was wounded near to its end.  It was apparently due to the frustration she felt at being wounded and the long time it was taking for her to heal that led to the intense psychological and physical stress she experienced that led to her to first being able to move objects through an exercise of will.  After this she developed her ability through exercises that strengthened her powers of concentration so that objects could be moved with a greater accuracy and refinement of skill.  Her abilities were first tested by the scientist named Edward Naumov (who observed her successfully move matches scattered over a table top without touching them) and later by Dr Genady Sergeyev (who amongst other experiments supervised the egg yolk being separated from the egg white whilst suspended in a saline solution).  He observed that during the experiment – and just as the yolk was separating from the white – the electrostatic field around the body of Nina Kulagina started to pulsate at the rate of four cycles per second.  Dr Sergeyev was of the opinion that these waves of energy acted like a magnetic vibrating force.  Dr Sergeyev stated: ‘The moment these magnetic vibrations, or waves, occur, they cause the object she focuses on, even if it is something non-magnetic, to act as if magnetised.  It causes the object to be attracted to her or repelled by her.’[iii]
ACW 22.1.2016

Additional information: During the Cold War Era (that saw the US persistently demonise the Communist Bloc through false propaganda) it is reported that the USSR developed an extensive programme of parapsychological research (often shortened to the Greek letter ‘psi’).  Rumours abounded in the paranoid West that the Soviet researchers were working to ‘weaponise’ psychic ability and a typical example of this found in the literature is that of Nina Kulagina (described as being from Leningrad) being able to ‘stop’ the hearts of frogs through an act of directed will-power.  According to Dr Milan Ryzal (a Czech biochemist) who defected to the West in 1967, the Soviet psychic laboratories were seeking to develop ‘thought control’.  An apparent KGB assassin – Dr Nikolai E Khokhlov (who is believed to have defected to the West in 1954) stated that even at that early date (prior to Sputnik) the Soviets were attempting to develop so-called ‘psychotronic’ weaponry designed to blind radar, bring down missiles, and disrupt computers.[iv]  Nina Kulagina was also known by a more exact transliteration of her name which is ‘Nelya Mikhailova’.  After more than 30 years of scientific scrutiny (that never managed to debunk her abilities), Nina Kulagina was viewed very much as the greatest psychic in the USSR.  When the two Western researchers Ostrander and Shroeder visited the USSR in 1968, they found around 20 dedicated centres for psychic research all funded by the government as a means to positively benefit all of humanity.  The two researchers reported that the idea of psychic power was accepted as a scientific fact in the USSR, and they stated that it was a bona fida academic field of research.  They were invited to attend the 1968 International Conference on ESP to be held in Moscow.  There they met many eminent Soviet intellectuals all specialising in one aspect of psychic ability or another.  It was here that the Soviet invention of Kirlian photography (developed by Davidovich Kirlian in 1939) was introduced to the two Western researchers – a technique used to photograph the bio-energy (or ‘aura’) that surrounds all living things.[v]  Despite Western claims that the USSR was attempting to ‘weaponise’ psychic ability, there is not a single shred of evidence to support this hypothesis.  Indeed even after the collapse of the USSR in 1991, the only genuine display of psychic ability in the USSR remain many black and white films of people appearing to move small objects with their minds, or attempting and failing to move small objects with their minds.
ACW 23.1.2016

[i] For the story of Nina Kulagina – see the Reader’s Digest: Into the Unknown, Edited by Will Bradbury, Reader’s Digest Association Far East Ltd, (1981), Chapter Entitled Mind over Matter – Pages 252-269.