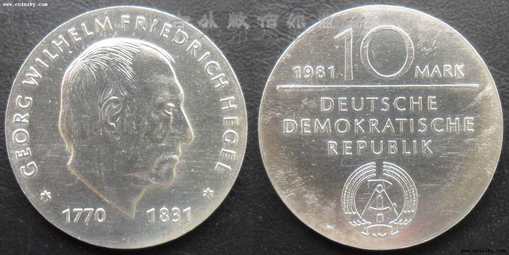 Pure Being, as it is mere abstraction, is just Nothing. In fact this definition is implied in saying that God is only the supreme Being and nothing more. The Nothing which the Buddhists make the universal principle, as well as the final aim and goal of everything, is the same abstraction.

​Hegel - Shorter Logic (1830)
​Karl Marx and Friedrich Engels knew about Buddhism as is evident in their respective writings. Both viewed Buddhism as ‘rationalist’ and Buddhist dialectics as being on a par with that of the most developed philosophy of ancient Greece. In my early research into this subject (which evolved around ‘proving’ that Marx had come into contact with Buddhist thought), I emphasised the link between Karl Marx and the great German expert in Early Buddhism and Tibetan Buddhism – Karl Koppen – whom Marx had first met as a young student at Berlin University – the two remaining good friends for the rest of Marx’s life. Indeed, Karl Koppen is recorded (in the biography of Marx) as providing Marx with copies of the scholarly books he had written upon the subject of Asian Buddhism – books of such accuracy and insight that they are still considered ground-breaking Buddhist texts in Germany today – but which have not yet been translated into English. Karl Koppen’s work appears to have presented in its correct form, the materialist philosophy of Buddhism as it actually is, as opposed to what a number of Western-derived ‘idealist’ misrepresentations. Part of the resistance to the spread of Koppen’s accurate Buddhist work into Western Europe (and the USA) might well be because of the popularity and spread of the ‘Theosophy’ – a movement that sought to integrate broad Christian concepts with vaguely understood elements of Asian Thought. Buddhism was very much mistakenly interpreted as ‘idealistic’ and its texts mistranslated to re-enforce this view. Asian thinkers and the Asian representatives of genuine schools of Asian Buddhism were ignored – unless they happened to support this erroneous view (as is the case of DT Suzuki and his distorted Zen Buddhism). Of course, Hegel (1770-1831) lived prior to the rise of Theosophy, and as a leading academic of his day, obviously had access to the European knowledge about Buddhism, as scant or as limited as it may have been at that time.* As can be seen from Hegel’s above quote, he did not exactly understand Buddhism, and this probably reflects the state of Western knowledge at this time. He mistakes ‘nothingness’ for ‘emptiness’ – two very different concept within Buddhist thinking, and does not seem to be aware that the Buddha did not know of, or accept a notion of a monotheistic god, or of a supreme being. Hegel mistakes Buddhism to be an ‘idealistic’ abstraction, rather than a system of perceptual science that defined psychological and physical existence as a mind-body nexus. In this regard, Hegel’s attitude toward Buddhism is indicative of the general ‘inversion’ that Karl Marx identified throughout his work. Buddha, like Marx, clearly indicates in his teachings that the mind is a product of material existence, and nowhere can it be found that the Buddha states that the mind creates the (external) material universe. This is a point that must not be misunderstood as it has been in the West. The Buddha (again, like Marx) freely admits that the human mind ‘perceives’ the external world and even ‘constructs’ an internal image of that external world (which may or may not be accurate according to a number of conditioning factors), but that the act of ‘perceiving’ the external world through the senses does not equate to ‘creating’ the physical universe that is being perceived. The external world continues to independently exist (albeit in a changeable state) regardless of whether it is being perceived or not. Despite the obvious inadequacy of Hegel’s interpretation of Buddhist thought, the important point here, is that it is through the study of Hegel that Karl Marx probably first encountered the subject of Buddhist thought. 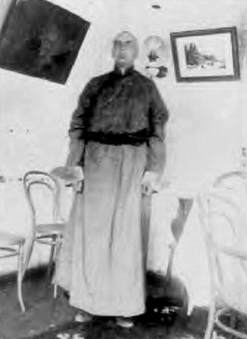 Russian Academy of Sciences Archive - FI Stcherbatsky
Fyodor Ippolitovich Stcherbatsky [Фёдор Ипполи́тович Щербатско́й] (1866-1942) was a Polish-born Buddhist scholar of some considerable importance in both Czarist Russia and the Soviet Union. Indeed, Stcherbatsky was already 51 years old during the Russian Revolution of 1917. He is remembered as both a Russian and Soviet ‘Orientalist’, being recognised as an academic expert in subjects of Buddhism, Indology and Tibetology. As part of his all-round education, Stcherbatsky had been sent abroad, where he studied Indian poetry under Georg Bühler in Vienna (Austria), and Buddhist philosophy under Hermann Jacobi in Bonn (Germany). In 1897, he and Professor Oldenburg (one of his teachers at Saint Petersburg University) established the Bibliotheca Buddhica - an international scientific and publishing project - in Russia, centred around the establishment of a library containing rare Buddhist texts – the first of its kind outside of Asia and the Far-East. In October 1899, he participated in the 12th International Orientalist Congress in Rome, where the discovery of ancient Buddhist manuscripts in Xinjiang (China) was announced. Between the years 1910-1911 he travelled to India, visiting Bombay, Pune, Benares and Darjeeling. A year after the Russian Revolution (in 1918), his expertise was recognised by the Revolutionary Authorities and he was appointed as a Full Member of the Russian Academy of Sciences. As the Russian Civil War waged, on August 24th, 1919, Fyodor Stcherbatsky delivered a lecture entitled ‘The Philosophical Teaching of Buddhism’ at the opening of the First Buddhist Exhibition in St. Petersburg. In the early 1920’s, he was sent to England on a Soviet Diplomatic Mission – where he met with Lord Curzon – and where in 1923, one of his books on Buddhist philosophy was published in English translation to great academic acclaim. As a non-theistic philosophy, the academic study of Buddhism was encouraged under Lenin, and later Stalin. In 1927, the Soviet Union established the Institute for the Study of Buddhist Culture (INBUC) – with Fyodor Stcherbatsky serving as its Director from 1928 – 1930. (The Soviet Union, of course, possessed two Buddhist Republics – the Republic of Kalmykia and the Republic of Tuva). In the years 1930-1942 – he was the Head of the Indo-Tibetan Cabinet of the Institute of Oriental Studies of the USSR Academy of Sciences. After the Nazi German invasion of the Soviet Union in 1941, important Soviet intellectuals and scientists were evacuated to safe areas (away from the vicious fighting). Fyodor Stcherbatsky was relocated to the comfortable Borovoe settlement in Northern Kazakhstan, where he died of natural causes on March 18th, 1942.
​
The following extract is taken from Fyodor Stcherbatsky’s Book (Published in English translation) entitled ‘The Conception of Buddhist Nirvana – With Sanskrit Text of Madhyamaka-Karika’ (where he is described as being a Professor at the University of Leningrad), within which Stcherbatsky expertly explains important aspects of Buddhist theory, whilst cleverly weaving a path through the Western philosophical tradition:
XIX European Parallels

To characterise Nagarjuna as a “nihilist” as some scholars have done would be misleading, for his condemnation of Logic is only one part, and not the Principle one, of his Philosophy.

Prof. Keith and Prof. M. Walleser suppose that Nagarjuna denies even the empirical reality of the world, this is because they have missed the positive point counterpart of his negativism, the identity of Dharma-kaya and Brahman. Nagarjuna’s philosophy was certainly opposed rationalism, European or Indian, which believes that Reality could be known by logical reason.

Prof. H. Jacobi has suggested a comparison between Zeno of Eleia and Nagarjuna. The similarity was not limited only to their dialectic. Nagarjuna’s philosophy points to a Whole which, when characterised in limited particulars leads to the antinomy of reason. Particulars are merely relative (Sunya). Zeno also devised his “sophisms” to prove the impossibility of motion, and to ‘lead the thinker to Parmenides’ conception of the world as a motionless whole.

There are remarkable coincidences between Nagarjuna’s negativism and Bradley’s condemnation of the concepts of things and qualities, relations, space and time, change causation, motion, the self, etc. Bradley may be characterised as genuine Madhyamika.

A similarity may be found between Hegel’s dialectic method and that of Nagarjuna. Hegel challenges common sense to point some object which is certainly known for what it is, and solves the question by stating that all we know of the object is its “thisness”, all its remaining contents being merely relation. This is also the meaning of tathata or “suchness”, and, as we have seen sunyata only means Relativity. Both philosophers assure us that Negativity (sunyata) is the soul of the Universe. Reducing the world of fact to a realm of universal relativity implies that everything cognisable is transient and illusory.

A similarity may also be noticed between the Mahayanist conception of Buddha’s Cosmical Body as the unique substance and Spinoza’s conception of God as the only substance.

It will be seen, therefore, that it will not be correct to characterise Nagarjuna as a “Nihilist”. All that Nagarjuna was at pains to show was that logics was incapable of giving us an idea of the Absolute, and that we can have a knowledge of the Absolute only by direct mystic intuition.


*For a history of the early transmission of Buddhism into the West – see ‘Hegel on Buddhism’:
https://www.rc.umd.edu/praxis/buddhism/morton/morton.html