Maurice Walshe and the Maintenance of Establishment Buddhism 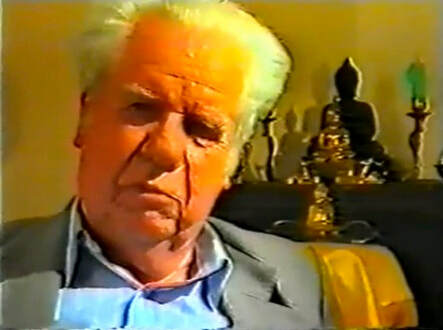 ‘Very oddly, the Pali-English Dictionary, it is said Nibbana is ‘purely and simply an ethical state… It is therefore not transcendental.’ In fact it is precisely the one and only transcendental element in Buddhism, for which very reason no attempt is made to define it in forms of a personal god, a higher self, or the like. It is ineffable. It can, however, be realised, and its realisation is the aim of the Buddhist practice. While no description is possible, positive references to Nibbana are not lacking: thus at Dhammapada 204 and elsewhere it is called ‘the highest bliss’ (paramam sukham), and we may conclude this brief account with the famous quotation from Udana 8.3:

This is, at the same time, perhaps the best answer we can give concerning the Upanishadic Atman. Buddhism teaches no such thing – nevertheless the above quotation could certainly be applied to the Atman as understood in Vedanta, or indeed to the Christian concept of God. However, to the followers of these faiths it would be an insufficient description, and the additions they would make would for the most part be unacceptable to Buddhists. It can, however, be suggested that this statement represents the fundamental basis of all religions worthy of the name, as well as providing a criterion to distinguish true religion from such surrogates as Marxism, humanism and the like.’

Thus Have I Heard – The Long Discourses of the Buddha: Translated by Maurice Walsh, Wisdom Publications, (1987), Page 29 (Introduction)
Maurice Walsh was a British academic originally specialising in the German language. A common biography that is repeated throughout the internet typically reads:

‘Maurice O'Connell Walshe was born in London on the 22nd December, 1911 and died on the 18th April, 1998. He was a student at University College, London, and at the Universities of Berlin, Goettingen, Vienna and Freiburg-im-Breisgau. He taught mediaeval German language and literature at the University of Leeds, and as a Reader in German at Nottingham University and Bedford College, London. When he retired in 1979 he became deputy director of the Institute of Germanic Studies, University of London. His published works include a three volume set of essays of the 13th century mystic, Meister Eckhart and, in 1987, Thus Have I Heard - the most popular and contemporary version of The Long Discourses of the Buddha. A few months before he died he completed a Buddhist Pali dictionary which, hopefully, will be published in the near future.’[i] Further research informs that Maurice Walshe served as Lecturer in English at the University of Vienna (1933-1935), and then relocated to Nazi Germany for two years, fulfilling the same academic position before returning to London in 1937 (taking the post of Assistant Lecturer in German at University College London). He apparently served in the British Army during WWII, where he read the letters of German prisoners (for censorship purposes), whilst somehow suffering an injury sufficient enough to see him in hospital for a few months and invalided out of the British Army in 1945. Curiously, Maurice Walshe was briefly Lecturer in Russian at the University of Leeds after WWII (1945-1946), and it was not until 1951 that his interest in Buddhism began.[ii] It is said that he spoke German like a native (being able to switch German dialects at will) and was an expert in medieval German as well as focusing on modern German texts. His attitude toward German Nazism is not clear and it is evident that his association with Nazi Germany is often quietly excluded from his ‘Buddhist’ biographies. He was married twice in his life – firstly to the Austrian Ruth Meisel (b. Vienna) in 1941, and then Florence Knight in 1973.[iii]

Retiring from his academic work in 1979, he became the Vice President of the Buddhist Society and Chairman of the Sangha Trust. Although never formally qualified in any Buddhist-related field of study, Walshe – like many White, middle-class men of his era – became a self-taught and self-proclaimed ‘expert’ upon Buddhism in the West and occasionally in the East. His understanding (like that of Christmas Humphreys, Alan Watts and many others), is hopelessly Eurocentric, arrogant and condescending in nature. This is not surprising as this form of paternalism is exactly that which the middle-classes find the most reassuring and comforting (like a stern Victorian father bringing order and efficiency to his household and servants). The Buddhism of Maurice Walshe is nothing less than a secularised Christianity stripped of its theological dogma. The middle-classes are taught in their schools that they are special and that they should dominate at the point of contact, everyone they encounter, and talk down to the masses as if they have something worthwhile to say. This matter of a misrepresented and misunderstood Buddhism in the West is compounded by the reliance upon the fascism of modern Japanese Zen Buddhism (c. 1868-1945), and such characters as DT Suzuki (openly courted in the West by Christmas Humphreys and Maurice Walshe) whose recorded activities prior to WWII should have ensured that he was arrested as a War Criminal post-1945, rather than invited to the West as an honoured guest! His ramblings and false interpretations that drew thousands of Westerners into highly commercialised ‘zendo’, also served to kill millions of non-Japanese people (including Westerners and Asians) between 1931-1945.[iv]

The understanding of Maurice Walshe regarding Buddhism is flawed. Of course, this attitude will be met with a certain indignation by the middle-class clique that perceives itself as ‘running’ Buddhism in the UK, and which (ironically) deifies the memory and work of Maurice Walshe. Although evidence suggests that he was a talented conveyer of the subject he was qualified to teach (i.e. the German language), the same cannot be said for his overly intellectual approach to Buddhist ideology. This does not matter to the middle-class clique that places Maurice Walshe on a pedestal, as an unquestioning cult has developed around his interpretation of Buddhism. He seems to think that the Buddha taught an ‘idealism’ that denied the existence or relevance of the material world. This is an absurd notion found nowhere within Asian Buddhism and one is left to marvel at what must be the naturally racist attitude that exists in the West which sees Europeans ‘make-up’ interpretations about subjects they know nothing about, rather than consult indigenous practitioners! As matters stand, the likes of Christmas Humphreys and Maurice Walshe have generated a highly intellectualised (and incorrect) form of Buddhism in the West that is so bizarre and off message, that it runs parallel to the now substantial presence of Asian Buddhism. It is a Buddhism enthused with Christian notions and bourgeois (conservative) attitudes that support the injustices of the capitalist system and the oppressive State. This type of Western Buddhism is a middle-class reinterpretation of a Christian Church it has grown bored with. Maurice Walshe wants his cake and eat it. Whilst stating he is not a Christian - his presentation of Buddhism amounts to nothing but a cherry-picked Christian theology dressed-up in the garb of secularism.

Karl Marx developed the work of Ludwig Feuerbach and exposed the psychology of theistic religion as being ‘inverted’ and therefore ‘illogical’. This is a devastating (deconstructive) argument to which the religionists have no logical response. It probably arises from Robert C Tucker’s (196) book entitled ‘Philosophy & Myth in Karl Marx’ (Transaction), within which Tucker argues that the writings of the early Marx were ‘religious’ in nature, despite the latter works developing a fully material interpretation of the world. As a young 26-year-old man, Karl Marx wrote his Paris Manuscripts (in 1844), which was an initial attempt at describing his material, Revolutionary ideas but not yet including the work of Charles Darwin (first published in 1859). Tucker mistakes the broad class nature of Marx’s writings as being representative of a divine universalism, albeit devoid of the usual religious garb. Tucker, being a bourgeois US academic is attempting to import into Marxism an alleged inconsistency as a means to undermine the power of the theory in the mind of the working-class. The proletariat is the (collective) victim of the oppression and injustice of the capitalist system which is supported by the Christian Church. Tucker never explains why it is that he chooses to accuse the early Marx of being religious in nature, but does not lay the same charge at the feet of Charles Darwin for the ‘universalism’ contained within his theory of evolution. The point is that both Marx and Darwin knew one another and even exchanged letters about the viability of their respective theories. Neither considered the other a secular version of a religious teaching. Whereas Marx thoroughly dismisses not only the tradition of Western religion, but also of Western philosophical thinking in general. Tucker, despite his academic stature, fails to acknowledge that it was theistic religion which historically usurped the notions of tribal ‘universalisms’, and that through evolutionary development (not to mention Revolution), these universalisms can be recovered albeit in entirely new forms, similar to but unrelated to any previous incarnations. On the face of it, the rejection of Humanism and Marxism by Maurice Walshe is quite shocking in its casualness and it is difficult to understand how he thinks he can retain a moral attitude whilst rejecting large sections of these highly moral systems of human thought. If Maurice Walshe had understood the genuine dialectics of Buddhism, then he would also understand why it is that both Marx and Engels possessed a high regard for Buddhism, and why many indigenous Buddhist communities in Asia have no problem upholding a traditional Buddhist practice on the one hand, whilst advocating Revolutionary Marxism on the other. The allegations that Marxism (or Buddhism for that matter) is a ‘religion’ must be firmly rebutted. Just because Maurice Walshe preferred to interpret Buddhism as a mystical religion does not mean that he can misinterpret Marxism in the same way. Marx (and Buddha) reject the inverted thinking of religion which mistakes a thought in the mind for a real object in the environment.