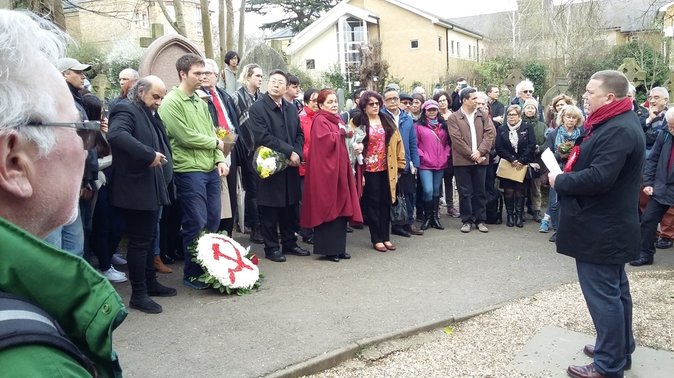 Ambassador of the Bolivarian Republic of Venezuela 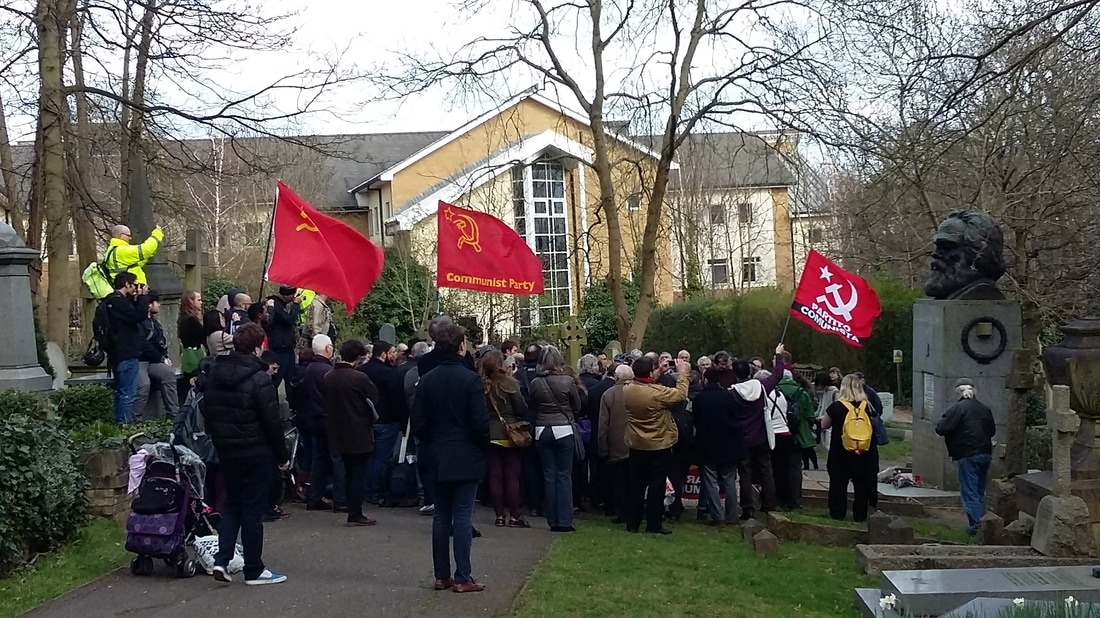 ‘In present times, as you know, the legacy of Marx is at the core of the Bolivarian Revolution and more specifically in the policies of our Government. Our social programs are inspired by the ideas of Karl Marx, giving priority to the inclusion of poor people into health, education, and housing systems.’

​US President Obama (2016)
October, 2017, will be the 100th anniversary of the Great October Revolution in Russia that swept VI Lenin and his Bolshevik Party to power. Today, around 200 people from all social and ethnic backgrounds converged on the entrance to Highgate Cemetery in preparation for the short march to the grave of Karl Marx (who died on March 14th, 1883), marked since 1956 by a monument equal to the historical importance of this extraordinary man. Following the destruction of the Paris Commune in May, 1871, Karl Marx, his family, Friedrich Engels and other Socialists in the UK, attempted to commemorate this event each year on its anniversary, but faced tremendous resistance from the British establishment. However, they continued to work for a regular gathering each year despite this official harassment. When Karl Marx died on March 14th, 1883, it was agreed that as this date was near the founding of the Paris Commune, it would be a good idea to merge the remembering of the life of Karl Marx with that of celebrating, commemorating and lamenting the passing of the Paris Commune – the world’s first attempt at establishing a Scientific Socialist State. Therefore, from 1883 onwards, the ritual of remembering Karl Marx has been intimately associated with the memory of the Paris Commune (which existed between March 18th to May 28th, 1871). 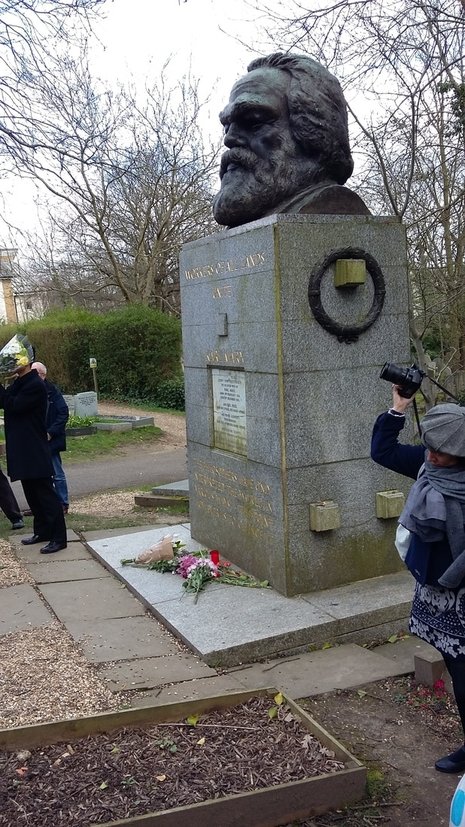 Her Excellency Rocio Maneiro – the Ambassador of Venezuela – gave a moving speech explaining how her country has been building a Socialist State premised upon Marxist principles, emphasising the eradication of poverty through the empowerment of the ordinary people. This has been achieved through extensive State assistance and support, which has seen an extensive re-distribution of wealth. This has seen a rapid reduction in homelessness (through the providing of good quality housing), and an equally rapid increase in public health through the establishment of a nation-wide medical system. The Venezuelan economy has been re-organised along Socialist lines, and has created employment and opportunities for the ordinary people to live in dignity through possessing a job, and positively contributing toward society. Employment unions are encouraged to ensure good working conditions, and there is an extensive welfare system for those who cannot work, or who are ill or disabled. However, Rocio Maneiro explained that despite all these important accomplishments for humanity, President Obama (of the USA) declared in 2016 that Venezuela represented an ‘unusual and extraordinary threat to the US national security and foreign policy’. Following this statement, the Western Press started calling for military intervention in Venezuela, and the destruction of its Socialist regime. This is how the so-called ‘democratic’ capitalist world responded to the Venezuelan working people taking control of their own destiny. Venezuela continues the struggle against the excesses and injustices generated by the exploitative system of capitalism. 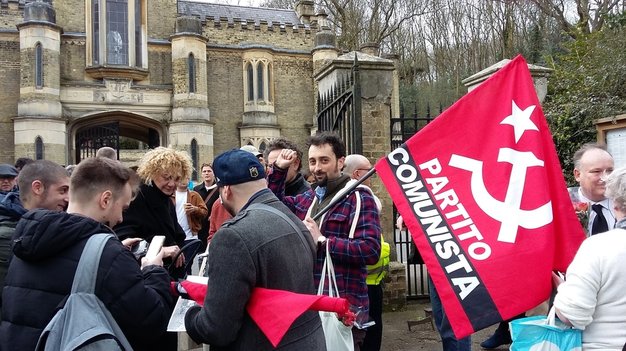 Liz Payne – the Chair of the Communist Party of Britain (CPB) – spoke powerfully about the historical importance of the establishment of the Paris Commune in 1871, and how it is important for all genuine Socialists and Communists to propagate its memory. Although the Paris Commune ultimately failed, the French people for a time exhibited a true working class consciousness which was attacked and destroyed by the reactionary forces of capitalism. Karl Marx, in his many works, stated that the working class will have many victories – and suffer many defeats, before the final victory of Socialism and the establishment of Communism. The Paris Commune symbolised how working people can take control of their own destinies, and if need be, organise to defend that achievement. The eventual defeat was noble, and set the example of how working class people should proceed. When a white shirt covered in blood was raised on a stick (taken from a dead worker killed by the authority) – the Red Flag of Socialism was born. 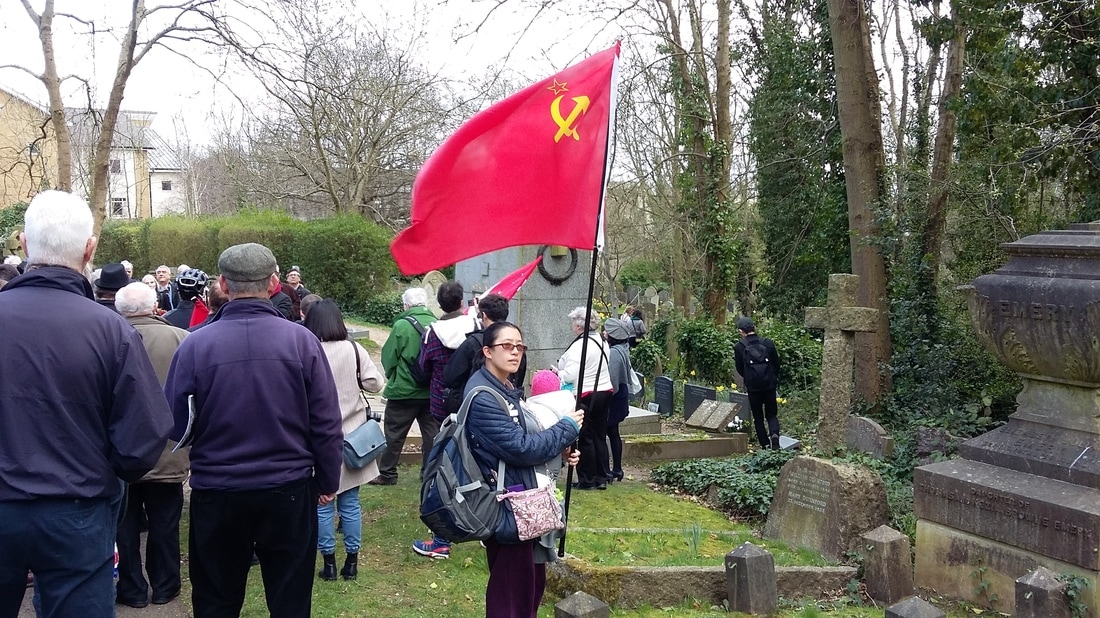