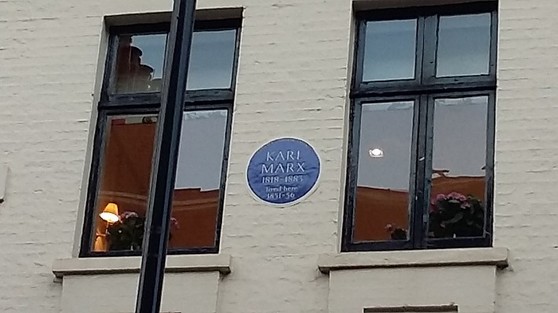 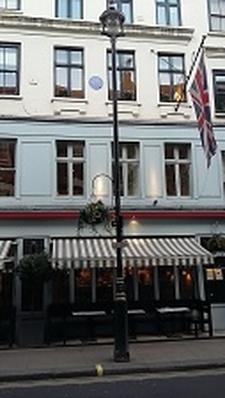 On the 11.2.2016, a delegation representing the BMA (UK) visited the site of 28 Dean Street, situated in the Soho area of West London – which is a five minute walk from Gerrard Street (in the heart of London’s Chinatown), and a one minute walk from Soho Square Gardens.  Karl Marx and his family lived in two houses on Dean Street – firstly number 64 and then number 28.  The room the Marx family occupied at 64 Dean Street is generally described as small – being no bigger than a closet or store cupboard.  By the time Marx moved into 28 Dean Street – his family comprised of himself, his wife Jenny (who was pregnant), his housekeeper Lenchen, and their three children (Jennychen, Laura and Edgar).  Their youngest son – Henry ‘Guido’ Marx – died in November 1850 whilst the family were still living at 64 Dean Street.  The Marx family rented only a small area of 28 Dean Street consisting initially of just two rooms (Marx would later rent a third room for use as his study).  In his Karl Marx – A Biography (1995) the historian David McLellan describes the two rooms as being situated on the second floor of the building and comprising of a back small bedroom and a larger front room (measuring 15ft by 18ft) that had three windows looking out onto the street.  He further states that the Marx family lived in this house from 1851 to 1856 (Page 240), but on photograph number 8 in his book (situated between pages 178 and 179) he states that the date of occupation was in fact between 1850 and 1856.  Indeed, the plaque raised by the now defunct Greater London Council (GLC) is affixed between two windows on the second floor of the building and quotes the dates of occupation as ‘1851-1856’ – a date that McLellan states is ‘not quite accurate’ on his description of the photograph of 28 Dean Street.  The biographer Francis Wheen – in his biography entitled ‘Karl Marx’ (1999) agrees with McLellan that the dates on the GLC plaque are incorrect, but is of the opinion that the rooms the Marx family rented were situated on the top floor of 28 Dean Street, and not the second floor as McLellan asserts - and where the GLC positioned its blue plaque (Pages 166-167).  A number of researchers give the following dates for the Marx family’s occupation of Dean Street:

If these dates are correct, then the GLC plaque must be judged as conveying the wrong dates, but why would an essentially leftwing local government body get the dates wrong about an important issue surrounding the life of Karl Marx when living in London?  The answer to this puzzle may well lie in the research of biographer Mary Gabriel as presented in her book entitled ‘Love and Capital’ (2012).  Gabriel explains (on Page 205) how the Marx family moved into 28 Dean Street at the end of January, 1851.  She further elaborates by explaining that the Marx family occupied the top floor of a century old, four-storeyed Georgian house. The building was home to three other families, two Italians, one of whom was the landlord, and a teacher of languages from Ireland – who had sublet part of his space to the Marx family.  Gabriel gives the dimensions of the front room as being no more than 15ft by 10ft.  The smaller backroom had a fireplace and a slopping roof.  In this backroom the entire family (including Lenchen) cooked, slept, and bathed.  These top floor rooms did not receive a water supply and the Marx family had to fetch water in buckets from the ground floor.  They had the choice of using a communal toilet that dropped human waste into a cesspool in the cellar – or to make do with a chamber pot in their rooms.  In footnote 23 Gabriel presents her evidence for the Marx family moving into 28 Dean Street in 1851 (Pages 426-427).  Gabriel states that the biographers who state that the Marx family lived on the second floor are incorrect.  Gabriel further states that the GLC was incorrect to affix its blue plaque adjacent to the second floor (as pictured above).  However, contrary to opinion of McLellan and Wheen, the GLC dating for Marx living at the address appears to be correct.  Gabriel further states that those biographers who assert that Marx moved to 28 Dean Street on December the 2nd, 1850 are wrong, as Marx wrote a letter to Engels (who was in Manchester) on that date, giving his address as 64 Dean Street – and made no mention of moving.  On January the 6th, 1851, Marx again wrote to Engels stating that he was having rent difficulties with his landlady – Gabriel makes the observation that Marx rented from a woman at 64 Dean Street, and a man at 28 Dean Street.  Indeed, Marx did not mention a change of address to Engels until his letter dated January 27th, 1851.  This evidence suggests that the Marx family rented the top floor of 28 Dean Street, and that they lived there between 1851 and 1856.  Tristram Hunt – in his ‘Marx’s General’ (2009) records that whilst Marx and his family lived in Dean Street, Friedrich Engels lived just down the road in Macclesfield Street (Page 183) until his departure to Manchester in 1850.

In 1851, Karl Marx was offered the post of London Correspondent by Charles Dana, the managing director of the progressive and anti-slavery orientated New York Daily Tribune, which at the time already had a US readership of over 200,000.  Marx was employed to write regular articles in English for the Tribune about European current affairs.  As his English was not very good in his early days in England Friedrich Engels would often assist with translating Marx’s German language articles into English, or on occasion, even ghost-writing.  This job gave the Marx family a modest but regular income whilst living in Dean Street that was augmented by Engels sharing his salary with the family.  At this time Marx was regularly visiting the Reading Room of the British Museum – a mere fifteen minute walk from Dean Street, researching for what would eventually become his masterpiece in political economy – Das Kapital.[1]  The bulk of this theoretical work appears to have been carried-out whilst Karl Marx lived in 28 Dean Street – despite the uncertainty of poverty and the death of two further children – their daughter Jenny ‘Franziska’, who died in April, 1852, and their son Charles ‘Mush’ who died in May, 1855.  In the early days at 28 Dean Street (1852 seems to have been the worst), there was little money from publishing and no money as of yet from Engels, and the Marx family was reduced to pawning their property – including clothing (in 1852 Marx wrote that he couldn’t go out because his coat was at the pawnbrokers).  On one occasion, Marx took his wife’s family silver with the Argyll crest on it to the pawnbrokers – who immediately called the police – believing the articles stolen.  It is reported that Marx had to spend the weekend in prison before his wife’s ownership of the silver could be established.  Life in Dean Street had been a constant struggle for the Marx family due to the death of three children (one at 64 and two at 28 Dean Street), the leaving of Engels for Manchester, grinding poverty, and the squalid living conditions.  The relief came in May 1856, when Jenny Marx inherited £160 from a relative in Scotland.  This allowed the Marx family to move to a small, three-storeyed house situated at the foot of Hampstead Heath – not far from Primrose Hill.

[1] Marx began his study in the Reading Room of the British Museum in June, 1850, around a month after moving into 64 Dean Street.  At that time the Reading Room’s Keeper of Printed Books was one Anthony Panizzi.  He was an Italian immigrant with leftwing, revolutionary leanings, who arrived penniless and unable to speak English, in London in 1823.  By 1850 he held a prominent and important position at the British Museum.  At this time, the Reading Room operated along the lines of a gentleman’s club that operated an exclusive membership policy.  Marx was lucky because Panizzi was sympathetic to his request for a pass-ticket – granting him permission to freely enter and leave the library as he pleased during opening hours, and to make use of the ample collection of books.  Marx subsequently spent hundreds of hours filling notebooks with important and relevant research references that would eventually feed into the further clarification of his Theory of Scientific Socialism, and culminate in his Magnus Opus - Das Kapital, published in 1867.  (Mary Gabriel [2012] Page 191)