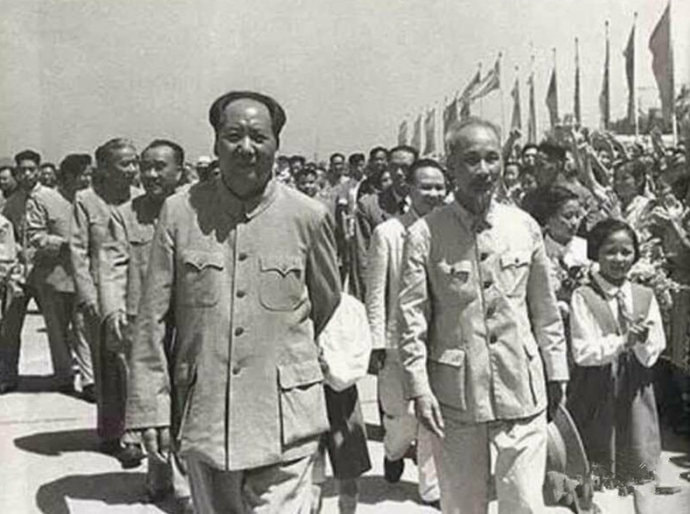 Mao Zedong (Left) and Ho Chi Minh (Right) - 1961 China
Author’s Note: Although an argument can be made that the teachings of Early and Latter Buddhism, reliant as each school is on the Buddha’s teachings of compassion, loving kindness, and wisdom, constitutes a form of pre-Marxist or even ‘utopian’ Socialism, a close observation of Buddhist theory confirms that although constituted in a very different historical epoch, Buddhist philosophy interfaces and dove-tails very neatly with the ideology associated with the Scientific Socialism of Marxist-Leninism in both its narrow and broad aspects. Within its Asian context, Buddhism is often found amongst the impoverished (ordinary) people (existing outside of Socialist countries), but where it is existing within Socialist countries, invariably the Buddhist Establishment either directly supports the building of Socialism or at least has no argument with it. It is only within the capitalist West where Buddhism has been hijacked by the bourgeoisie and distorted into a secular form of Protestant Christianity. Capitalist Japan, which retains much of its pre-WWII fascist attitudes intact, has also seen the perversion of Buddhism into supporting rightwing causes and justifying brutality, etc. The following extract is significant as it portrays the great Vietnamese Revolutionary leader – Ho Chi Minh – hiding out in the jungles of Thailand (around 1928) as a Buddhist monk propagating Revolutionary Socialism amongst the oppressed masses. Born Nguyen Sinh Cong, with his father giving him the further name of Nguyen Tat Thanh at aged ten, many eventually knew him as Nguyen Ai Quoc – with ‘Ho Chi Minh’ (written in the Chinese language as ‘胡志明 - Hu Zhi Ming) apparently being a Buddhist name meaning ‘He Who Brings Enlightenment’.  The certainty of the facts in this story are well recorded in various sources. Was Ho Chi Minh formally ‘Ordained’ as a Buddhist monastic? He could have been as part of his cover story, as it is doubtful the Buddhist monastic establishment would have tolerated a ‘fake’ monk who appeared to possess the ability to reach-out to the ordinary people and influence their behaviour. On the other hand, Buddhist monks calling for a Socialist Revolution and a redistribution of wealth was nothing new in Asia and is still common today.
ACW (2.5.2019)

‘But in the meantime “Vuong” had been leading an eventful life. In the spring of 1927 Chiang Kai-shek, who was Borodin’s pupil, Chou En-lai's colleague, and Sun Yat-sen's heir – the same Chiang Kai-shek who had helped train so many Vietnamese revolutionaries in Whampoa – showed his true colours and crushed the Canton Commune in a matter of months. This inevitably led to a break with the Soviet Union, the disbanding of the unions and the slaughter of the Communist militants. The Thanh Nien and Ho’s revolutionary school were swept away in the general turmoil. But Ho and his lieutenants had foreseen the danger and fled – some to Hankow, others to Shanghai and thence to Hong Kong, where the Thanh Nien held its congress in May 1929. He did not attend, however; he had left China some time earlier, at the end of 1927.

By spring 1928 he was back in Moscow. After a series of talks with the heads of the Comintern he travelled to Brussels, where with Mme. Sun Yat-sen, Nehru and Hatta he took part in the Congress against Imperialist War. Following a brief visit to France in 1928, he stayed for awhile in Berlin, Switzerland and Italy.

The following autumn he sailed for Siam (now Thailand) with a triple objective: to set up party cells among the substantial Vietnamese colony there; to foment trouble at the expense of the administration in nearby Indochina; and to reorganize the Comintern’s network in Southeast Asia.

In November 1928 there was talk of a certain “Old Chin” in the northeastern provinces of Siam. He was rumoured to have come from China. But the Vietnamese in Siam saw quickly that he was one of their own people. In Udon Thani, and subsequently in Sakon Nakhon, he founded a newspaper called Than-Ai (Friendship), opened a school where both Thai and Vietnamese were taught, and set up a forest cooperative. The villagers worshipped the Lord High Genie Tran – the departed spirit of Tran Hung Dao, the legendary sovereign who had defeated the Mongols. So Old Chin composed a song of praise to the “guardian spirit of the mountains and waters of Vietnam” - the requirements of the nationalist phase were leading him on to strange ground. However, for Nguyen Ai Quoc, or Vuong, or Chin, anything that exalted anything strictly characteristic of his native country paved the way for the revolution.

Clad in the robes of a Buddhist monk, he afterward lived for a while in Bangkok, studying and preaching and at the same time setting up cells within pagodas, training the young bonzes in a comprehensive social philosophy which embraced everything except the foreign invader and his hirelings. Traces of the networks he then established and of the watchwords he imparted came to light years later, in 1945, in south and southeastern Cochin China – and perhaps in the period from 1963 to 1966, when the Buddhists rose against the authorities in Saigon. After all, Buddhism is rooted in attachment to the fatherland, the land of one’s ancestors. It attaches importance to the real, the immediate, the given, the experienced. It sets the perfect stage for a skilled Marxist like Ho.’