Factionalism in the British Communist Left 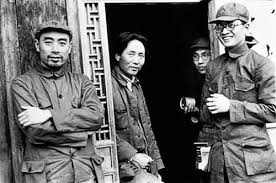 Karl Marx and Friedrich Engels founded the First International Workingmen’s Association in the UK that lasted from 1864-1876.  Marx eventually dissolved this movement because he was of the opinion that circumstances were not yet right for world revolution.  Marx withdrew from direct confrontation with the establishment, and instead focused on the further theoretical development of his theory of Scientific Socialism.  This switched the emphasis for revolution from physical to the world of ideas and this is exactly what Marx advocated.  Although he called for the worldwide overthrowing of the bourgeoisie and the corrupt capitalism that it represented, he was very well aware of the power of ideas to inspire others to decisive physical actions.  Marx was wise and knew when physical action should be carried-out, and when it should not.  His method was the perfect integration of advanced and progressive thought carried-through by actions when the circumstances were right.  For Marx the pursuit of world revolution was often a smooth interchange between thought and action – with occasionally the two dramatically coinciding.  Marx (and Engels) developed their theory of Scientific Socialism with a definite long-view perspective which took into account the attempting and failing of world revolution many times, until the final accomplishment of the permanent replacement of capitalism with Socialism.

The Second Socialist International (1889–1916) was founded in Paris six years after the death of Marx and was essentially a trade union and labour movement.  This dissolved in 1916 because of a system failure of its constituent nation parties to hold a united, working class internationalist front in opposition to the bourgeois war that had developed in France and elsewhere.  As Marx was against nationalism, and taught that the bourgeoisie created nationalism and racism to prevent the international working class from uniting and working together to effectively confront and over-throw bourgeois oppression, and its corrupt capitalist system.  Competing royal houses in Europe (all of whom were blood related) encouraged their respective bourgeois governments to go to war, and in so doing, use the lives of their working class men as canon-fodder.  Although there did exist Socialist opposition to WWI, many prominent members of the Second International voted to support their national bourgeois governments, and instructed their working class membership to join national armies.  As the Second Socialist International completely failed to apply the Scientific Socialism of Marx, it was dissolved in 1916 at the height of the murder and savagery in France and Belgium (and elsewhere) which saw different groups of working class men pointlessly opposing one another for the class interests of the bourgeoisie.

Vladimir Lenin founded the Third Communist International which lasted from 1919 to 1943.  Lenin called all working class people around the world to come to the theoretical and practical aid of the fledgling Communist State in revolutionary Russia.  Since the successful taking of power (and its consolidation) by the Bolsheviks, the bourgeois Western powers (and their Japanese allies), ruthlessly attacked Russia and supported the counter-revolutionary movement.  This was an economic, military and rhetorical attack on Russia that was opposed to the international working class uniting in the pursuance of its best class interests.  The Third International sought to establish a worldwide, Communist movement in both theory and practice, and founded the International Communist Party which eventually had branches in virtually every other country.  These branches were part of the Soviet Union and represented a united proletariat throughout the world, and its purpose was to support (theoretically and practically) all working class movements throughout the world in preparation for the eventual world revolution.  During WWII, Joseph Stalin dissolved the Third Communist International in 1943, because its theoretical premise of working class unity throughout the world was impractical to pursue, whilst fascist Germany, Italy and Japan were unleashing total war and destruction across the globe.  Furthermore, Stalin understood that the Western (liberal) bourgeois States were then allies of a USSR (that was fighting for its very existence at the time, trying to stop and push back a very strong Nazi German invasion), were needed to provide material aid and moral support.  An uprising of working class movement at that time would have interrupted the direct material aid and internationally weakened the coalition against Nazi Germany and her fascist allies.  Of course, a working class uprising in the fascist countries could have immediately stopped their aggression – but such an uprising was considered unlikely due to the oppressive nature of the fascist States and the draconian measures taken against any refusal to toe the official rightwing line.  Instead, Stalin advised the International Communist Parties to work for world revolution in a manner that best suited their local conditions, and he called for the various Communist Branches to act in a more independent manner, whilst also trying to co-ordinate their local activities with the premise of international solidarity.  Although the USSR remained the central focus for International Communist action, the Communist Party branches were now given a new latitude in their functionality, which was designed to increase flexibility and effectiveness of action.

The first major trauma that tested this new climate of flexibility, was the betrayal of Joseph Stalin (and the International Communist Movement) by the Trotskyite traitor – Nikita Khrushchev.  Communist China under the guidance of Mao Zedong rejected the Khrushchev line, as did the famous Che Guevara, and many other Communists around the world.  Khrushchev – as a Trotskyite – sought to take power in the USSR after the death of Stalin in 1953, by courting the anti-Soviet rhetoric emanating from the USA and the UK, as these two countries attempted to build an anti-Communist front in Europe and beyond.  Many branches of the International Communist Party attempted to come to terms with Khrushchev’s so-called ‘Secret Speech’ in 1956, within which he issued an attack on Joseph Stalin that was a tissue of lies (see Grover Furr’s research in this area).  Khrushchev’s betrayal of Marxism, Marxist-Leninism, and the Soviet Union eventually led to the premiership of Mikhail Gorbachev and the final demise of the USSR through his pro-capitalist corruption.

Since the dissolution of the Soviet Union (and its Communist Party) in 1991, the International Communist Party branches were officially dissolved.  The Communist Party of Great Britain (CPGB) transitioned into a bourgeois left intellectual movement, with the ‘CPGB’ name being resurrected by a UK Trotskyite group that seeks to demonise and belittle the entire Soviet-era achievement.  In the late 1970’s, a group split from the CPGB regarding a dispute over the legacy of Joseph Stalin.  The CPGB was moving away from a position of support for Stalin, and as a consequence, the ‘New Communist Party’ (NCP) was formed and officially recognised.  Today, the NCP follows a position of supporting North Korea and its ‘Juche’ theory.  In 1988, another group split from the CPGB as it did not agree with the bourgeois liberalism emanating from Mikhail Gorbachev.  This group took the Morning Star newspaper with it and became the ‘Communist Party of Britain’ (CPB).  The CPB today follows a policy of unquestioning support for the Labour Party, and advocates the ‘British Road to Socialism’ – a premise it originally rejected in 1988, as it stemmed from a revisionist movement in the 1960’s in the original CPGB.  The CPB supports parliamentary Socialism and officially plays-down any ideas of direct revolutionary action.  The Communist Party of Great Britain (Marxist-Leninism) – CPGB (ML) – was formed out of the Socialist Movement in the early 2000’s, and has its historical roots in the parliamentary Labour Party.  Today it has a hard-left approach to Communism (that supports Stalin and Mao), and rejects the tyranny of Khrushchev.  The Revolutionary Communist Group (RCG) is a Marxist-Leninist and anti-imperialist group that grew out of the Trotskyite Socialist Workers Party – its current relationship with Trotskyism is unclear – but it does appear to support Joseph Stalin’s unconditional anti-imperialist struggles.  It follows a staunch anti-racist and anti-capitalist line.

There are many leftist groups, parties, associations, and movements in the UK and across the world.  All behave in a unilateral manner that presumes each faction is the ‘only’ faction in existence.  This means that a single world vision emanates from the many revolutionary steering committees that ignores all other movements and approaches.  This has led to a potential international communist movement scattered into tiny parts, with each behaving as if it possesses the power and moral right to lead the World Communist Movement, even though in reality each faction only possesses the immediate power of attracting only a few hundred supporters at any one time.  What a genuinely ‘Communist’ seeker must understand is that ‘Scientific Socialism’, and its development of ‘Marxist-Leninism’ are dialectical, historical trends that are not, (and cannot) be limited to any single group, party, or movement that claims to singularly represent it.  A dialectical and historical trend involves the entire international working class movement, irrespective of theoretical groups that claim to represent it.  In fact, a singular claim to exclusively represent a dialectical movement in history is in itself non-dialectical in nature and a hindrance to true internationalist development.  This would suggest that any genuine working class movement will represent itself spontaneously, and be simultaneously ‘free’ of artificial contrivance.  As things stand today, the Western Communist Left is riddled with ego, factionalism, fetishism, arrogance, lack of Marxist insight, and racist attitudes.  This demonstrates a remarkable infiltration of the Communist Left from Trotskyites and the broader right wing.  This demonstrates the paradox that whilst claiming to represent the International Communist Movement, many of these factions have in fact abandoned true ‘Internationalism’ and have – like Khrushchev – betrayed both Marxism and Marxist-Leninism.  Considering this current climate of corruption and dysfunction within the Communist Left, a genuine seeker of the Marxist path should personally study the works of Marx, Lenin, Stalin and Mao, and learn to understand dialectical materialism, and think independently in a progressive manner that is not being represented by the many factions that vie for their membership.  Marx, Engels and Lenin, advocated that the working class mind must be freed from its bourgeois oppression and its inversion cured through adopting a correct class consciousness that interprets events correctly.  Dialectical events will unfold regardless of how many factions come into being or pass out of existence.  When the truly Communist ground-work has been achieved through personal education, then a progressive individual may join (or not join) any faction that is useful, although it must be remembered that the Communist factions are currently failing in their presumed function of a) uniting the international working class, and 2) leading it correctly.  As Marx, Lenin, Stalin and Mao achieved these objectives, their example should be followed.