Up until fairly recently, the coverage of the Soviet contribution toward the Space Race at the Science Museum has been understated, and eclipsed by its obvious preference for US endeavours in this area.  However, in co-operation with the Russian Authorities (both governmental and academic), many of the excellent Soviet innovations in space technology have been transported to London for those who can afford to see it.  The exhibition is not cheap with a single adult ticket covering both admission to the exhibition and a talk costing £16 – although children under 7 years of age are free.  However, visitors should also be aware that the Science Museum operates a strict ‘No Photography’ policy, presumably in an effort to maximise profit making, as the soft-back book accompanying the exhibition costs a massive £30 to buy.  Furthermore, the books about the Soviet Union that are on sale in the associated shop, pursue an indifferent or antagonistic view of Soviet Socialism and Communism, and can hardly be judged as impartial.  One book even equates USSR with German Nazism – despite the fact that the former lost around 27 million men, women, and children in the defeat of the latter during WWII.  Even within this exhibition which is dedicated to Soviet space technology, the powers at be at the Science Museum decided that they should place an area dedicated to the US Apollo 11 mission between examples of advanced Soviet technology.  This is symbolic of the thin-line the Science Museum ideologues feel they must follow when dealing with any modern technology that does not have a capitalist origin.  On the one-hand, the extraordinary and rapid industrial and technological development of a Communist country from a backward feudal State in 1917, to one that placed the world’s first satellite in space in 1957, as to be balanced on the other-hand with the Western misconception that Communism is evil and not worthy of veneration, and this bipolar approach is present throughout the Science Museum’s commentary in the exhibition.  This narrative starts at the very beginning to downplay the role of Socialism and Communism in the Soviet system, stating that many different modes of thinking led to the Soviet success.  The Science Museum booklet states (under the sub-heading ‘Into the Cosmos’):

‘Russia’s century-long fascination with space travel has been fuelled by a unique mixture of spiritual, cultural, and political ideologies.  Russia’s revolution in 1917 encouraged many to contemplate new worlds, both on Earth and out in the cosmos.  Enthusiasts gathered to design rockets, while others engaged through art, literature, cinema and architecture.'

This approach is unconvincing as it fails completely to explain why it is that the ‘different’ cultural and spiritual ideologies failed to modernise Russia to any great extant prior to 1917, and why it was that in just 40 years after the date of the Communist Revolution, the Soviet Union was leading the world in virtually all areas of science.  The truth of the matter is that the ideology of Marxist-Leninism transformed the psychological and physical climate of the diverse peoples of Russia and the surrounding areas.  The Science Museum, whilst making profit out of Communist inspired technology, does not want to be seen as encouraging an understanding in, or veneration of Communism or its ideologies.  For instance, whilst explaining (without any mention of the contributing factor of Communism) that post-1917 Soviet citizens were encouraged to think freely – even in their own homes – and to create new ways at looking at science and formulating new approaches and theories, the various knowledge-declaring placards affixed along the walls in chronological order, then state that the Soviet Union was not a good regime because it imprisoned hundreds of thousands under purges allegedly order by Joseph Stain.  I assume that this negative (and inaccurate) depiction of the USSR, near as it is to the beginning of the exhibition, is designed to derail any admiration for the Soviet system a visitor might develop due to witnessing the obvious superiority of the approach of Communist thinking upon technological innovation.  An attack on Socialism and Communism is an attack on the Working Class and its emancipation.

However, the sharing of knowledge is a main principal of Communist thinking, and in holding this exhibition, the Science Museum (regardless of its obvious bourgeois nature), is facilitating progressive understanding.  Although I did not photograph the exhibition, I can confirm that there were many inspiring real or replica versions of satellites and parts of rockets (usually the returning capsules of famous Cosmonauts), and did include the LK-3 Lunar Lander that the Soviets intended to land a human-being on the surface of the Moon.  This is a photograph of the vehicle first published in the Guardian Newspaper whilst covering this exhibition: 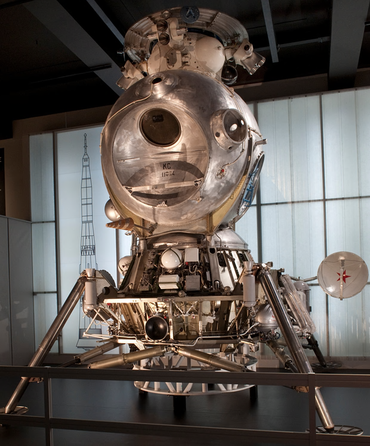 Also on display was a space-suit that the post-Soviet Russian space programme has designed for a human being to walk on Mars.  It is a compelling collection of awe-inspiring technology that was produced by an entirely different way of thinking – the official narrative of the Science Museum totally ignores this point.  It is interesting to compare the United States of America (which was capitalist at its inception), which quite frankly struggled in its space programme, with the Soviet Union that in just 30 years of existence, moved far ahead of the capitalist world.  The Soviets put the first satellite into space (Sputnik) in 1957, then the first living creature (Laika the dog, who could not be brought back to earth), followed by further cosmonaut dogs (Belka and Streika, both of which returned safely).  Then there followed the first man in space (Yuri Gagarin) in 1961, and the first woman in space (Valentina Vladimirovna Tereshkova) in 1963 – the US would not put a woman into space until the 1980’s!  In 1968, the Soviet Zond-6 was an unmanned scientific probe that was the first man-made object to fly around the Moon.  The LK-3 Lunar Lander was intended to land a man on the Moon in 1969, but due to technical difficulties, its mission could not be initiated.  Lunar 15 was launched on July the 13th 1969 and was intended to land on the Moon, collect a soil sample, and then return to earth BEFORE the Americans managed to return with the Apollo 11 mission.  However, Lunar 15 crashed during its descent to the Moon surface.  Although the Western media tends to ignore the many American technological defeats, and limits the entire space program to the Apollo 11 mission, it is a documented fact the Soviet Union continued to out-think and out-perform the Americans in every other field of space exploration, not only before the Apollo 11 mission, but also after it.  In 1970, for instance, Lunokhod 1 became the first robotic vehicle to operate on the Moon, whilst in 1971, the Soviet Union successfully launched Salyut 1 – the first world’s functioning space station.  These innovations have continued with the Russia Federation, which continues to develop space station and space exploration technology at a time when the USA has felt disinclined to do so.  What follows is a collection of Soviet photographs and poster-art designed to celebrate the Communist Era and the space age it ushered in for the world: 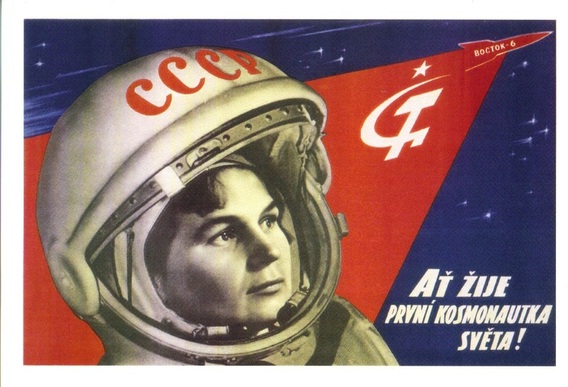 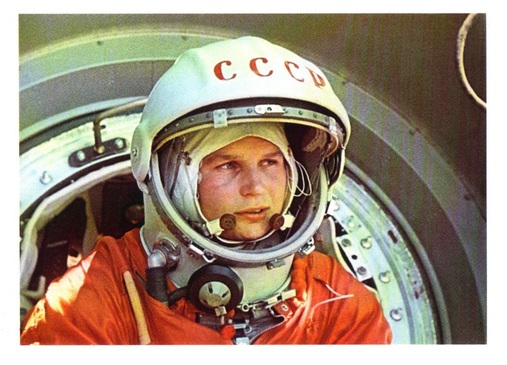