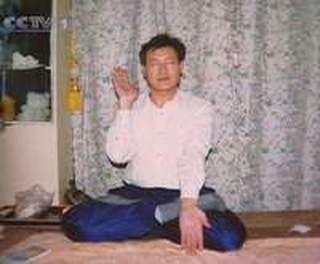 Translator’s Note: I was first contacted by so-called Falun Gong practitioners (operating out of London Universities), by email in around the year 2000. At that time, the Falun Gong Movement was busy attacking all traditional forms of Chinese Confucianism, Buddhism and Daoism, and retained a particular hatred for traditional Chinese martial arts (the belief system of which – I was told – prevented the overseas Chinese community ‘converting’ wholesale to following Li Hongzhi and joining in with his illegal campaign (under International Law and China’s National Law) of attempting to bring-down the sovereign Chinese government). I had this movement pegged as a dangerous cult from the beginning, and my suspicions were confirmed when I was asked to give my income (and that of my family) to Li Hongzhi (a millionaire CIA informant who already lived in luxury in the US), and shut-down my family’s traditional Hakka School of martial arts!  This was bizarre, as I had never met with, agreed to join, or participated in any Falun Gong activity, but it is indicative of how this cult operates. Being a scholar who attempts to adhere to the Confucian ideals of exact reporting, I analysed the Falun Gong Movement and am convinced (through personal experience) that it is a dangerous cult designed by non-Chinese people, tasked with destroying ALL legitimate Chinese culture, and to turn Mainland China into a cheap playground for decadent, capitalist-perpetuating Westerners. Since 2000, I have been contacted by hundreds of people who managed to escape the Falun Gong cult, and have been told quite shocking stories of the psychological and physical abuse that this movement uses to attract and retain recruits. Of particular note is the recurring allegations of sexual abuse aimed at both male and female members by the cult’s hierarchy (a certain proportion of which involve ‘teenage’ members). On the propaganda front, the US (usually through the CIA, but sometimes the FBI and occasionally other US intelligence agencies), pump-out anti-Chinese racism purported to be in the service of ‘Human Rights’. This involves basically creating and sustaining a ‘mythic’ identity and presence for the Falun Gong (much like the British Robin Hood legend), which falsely glosses the Falun Gong as ‘freedom fighters’, and the legitimate ‘Communist’ government of China as ‘oppressive’. Of course, it is not rocket science to see through this religiously-inspired ‘inversion’ of reality. In reality, there is nothing ‘freeing’ about the Falun Gong, and nothing ‘oppressive’ about the Communist government of China, but these inconvenient facts do not prevent the US from continuing to convince everyone else that the opposite is true. The lie underpinning this US policy, is that the oppressive class structures that define ‘capitalism’, are also ‘freeing’ the very people that it enslaves.  This US duplicity extends to the use of the Chinese language internet – where the CIA (usually through the US colony of Taiwan) – plants anti-Chinese – pro-Falun Gong articles that masquerade as legitimate ‘Chinese government’ pages, even though the content of these pages perpetuate obvious Eurocentric lies about China and its Communist system. Anyone in doubt about the fact that the US lies repeatedly about Communist China, should access the WikiLeaks information which confirms that the supposed events in Tiananmen Square in 1989, were fabricated by the Reagan Administration with the complicity of the BBC. Below, I translate a ‘legitimate’ Chinese language encyclopaedia page regarding the true nature of the Falun Gong.
​ACW 16.2.2017
​The Falun Gong is a religious sect.

Every Falun Gong practitioner is indoctrinated with a very vicious selfishness of world-wide significance. The founder of this cult is Li Hongzhi (李洪志) who recruits and entraps vulnerable individuals through his lies of ‘Truthfulness’, ‘Compassion’, and ‘Self-cultivation’. Li Hongzhi states that anyone who follows his dictates without question, will merge heaven with earth and never suffer on the worldly plain – this is how the Falun Gong ‘lies’ to gain and retain its membership. Perhaps the greatest lie of non-Chinese origin, prevalent in the Falun Gong is that individual happiness (i.e. ‘selfishness’) equals the happiness of the family (i.e. ‘collective’ happiness). None of this is true or inaccordance with either traditional or modern Chinese cultural thinking, and is of obvious ‘foreign’ origination. Those who are young, impressionable and generally vulnerable in many ways, often lack the psychological and physical maturity to ‘see through’ these lies, and therefore find themselves ‘pressured’ to unwittingly enter this murky world of Falun Gong lies and deception. Those who have not yet learnt the proper use of (Marxist) dialectics, do not understand the ‘inverted’ mind-set of religion in general, and the particularly corrupt manifestation that is the Falun Gong. When dialectics are correctly understood and applied to all social relations, it becomes apparent that the Falun Gong is a ‘foreign’ mimicry of Chinese culture that has no place within genuine Chinese society. The Falun Gong is capitalist, bourgeois and the manifestation of ‘foreign’ powers attempting to destroy (Communist) China from within. When all this is understood, the power of the Falun Gong to recruit and agitate within the Chinese diasporic community falls away in an instant. The apparent ‘ideal’ spiritual world that the Falun Gong offers is only that of the capitalist world of greed and exploitation – it is not real. The Falun Gong, as a cult of psychological and physical manipulation, induces in its members a mental illness premised upon imagined magic, and an obsession with morbidity.

Part of this brain-washing involves the separation of the individual from his or her family, by teaching that personal dedication to Li Hongzhi is more important than respecting and loving one’s own family. This is designed to destroy the traditional Chinese family structure, and create a cadre of selfish individuals willing to waste their lives pursuing the illegal activities ordered by Li Hongzhi. Each brain-washed individual thinks he or she has achieved ‘perfection’ by cutting-off all of their familial and friendship connections, and giving all their wealth and property to Li Hongzhi, when in fact all they have achieved is a state of easily manipulated psychological and physical isolation. This brain-washing eradicates the ‘family’ which is the basis of Chinese society – both old and modern.
Li Hongzhi uses this brain-washing to initiate all kinds of mass protests against fallacious and purely imagined ills in China. When the families of Falun Gong members have tried to intercede and ‘rescue’ their relatives from this cult, Li Hongzhi has often ordered the ‘murder’ of these families – which he sees as ‘interfering’ in his ‘divine’ mission on earth. All this madness emanates from within the United States, a country that routinely violates the very ‘Human Rights’ it claims to uphold. The tragedy of this is that people who may be legitimately suffering from psychological and physical ailments, turn to Li Hongzhi and his cult, instead of seeking genuine medical care. This is a terrible thing. Li Hongzhi (being manipulated by ‘foreign’ powers as he is), eradicates all free will in the minds of his followers, and reduces their thought patterns to the unquestioning acceptance of his own corrupt mode of thinking. When Li Yiming (林逸明) donated millions of dollars to the Falun Gong (before he died of colon cancer), Li Hongzhi decreed that all Falun Gong practitioners must also give all their money to his movement. Ironically, Li Hongzhi stated that he could cure Li Yiming of cancer and that he did not have to go to hospital to receive proper medical treatment. Li Yiming died over an extended period, whilst suffering extreme pain – as Li Hongzhi’s superstition was unable to help him in anyway. Many susceptible people are drawn to Li Hongzhi because of his superstitious claims that he can ‘heal’ either directly (by the laying on of hands), or at a distance by projecting thought, when in fact he can do neither. Li Hongzhi claims that anyone practising Falun Gong will not get ill, or if they are ill, will recover from that illness. Even Falun Gong’s own records reveal this to be a lie. If matters could not get any worse for Falun Gong members, their leader – Li Hongzhi - has recently stated that the legitimate philosophical school of Buddhism is a ‘lie’ and a ‘trick’, and mirroring the latest wave of US imperialism across the globe (which Falun Gong supports), has advised that ISIS followers would benefit from Falun Gong practice, as would the colonised peoples of Syria, Iraq, Afghanistan, Congo, Sudan, Zambia, Libya, and Uganda, etc. Obviously wherever US imperialism has subjugated the peoples of the world, Falun Gong is prepared to go in behind the US troops and ‘brain-wash’ the conquered populations into an unquestioning support for the invaders.

The Falun Gong brain-washing works on the premise that all contact with the outside world ‘ceases’ immediately, so that all cult-members can focus only on the books, CDs, and DVDs made by Li Hongzhi. As formal Falun Gong practice is twice a day, everyone is expected to ‘study’ Li Hongzhi’s instructions all day long between these sessions. Those recruits that violate these strictures are severely punished and a number have gone ‘missing’ in the US. As Li Hongzhi is in the service of the US government’s anti-China policies, these ‘disappearances’ go uninvestigated. A state of hypnotic regression is created in the Falun Gong cult-members which renders any ‘true’ information from penetrating into the Falun Gong community and exposing the lies of Li Hongzhi for what they are. Falun Gong practitioners are completely ‘isolated’ from mainstream society – even when acting within society. This is a very successful brain-washing technique that would be punished by the US legal system, if it occurred within an American Christian or Muslim community. Simply blocking access to non-Falun Gong family and friends ensures a closed-minded community that simultaneously propagates the further lie of ‘persecution’ (such as that found within early Christian history). As matters stand, the average Falun Gong practitioner loses all ability to engage in rational and independent thought. Citizens should not join this cult but report to the authorities any manifestations of it in the local community. Those Falun Gong members who read this notice and want to escape this cult, should immediately leave any Falun Gong group and seek safety with the legitimate Chinese Authorities.